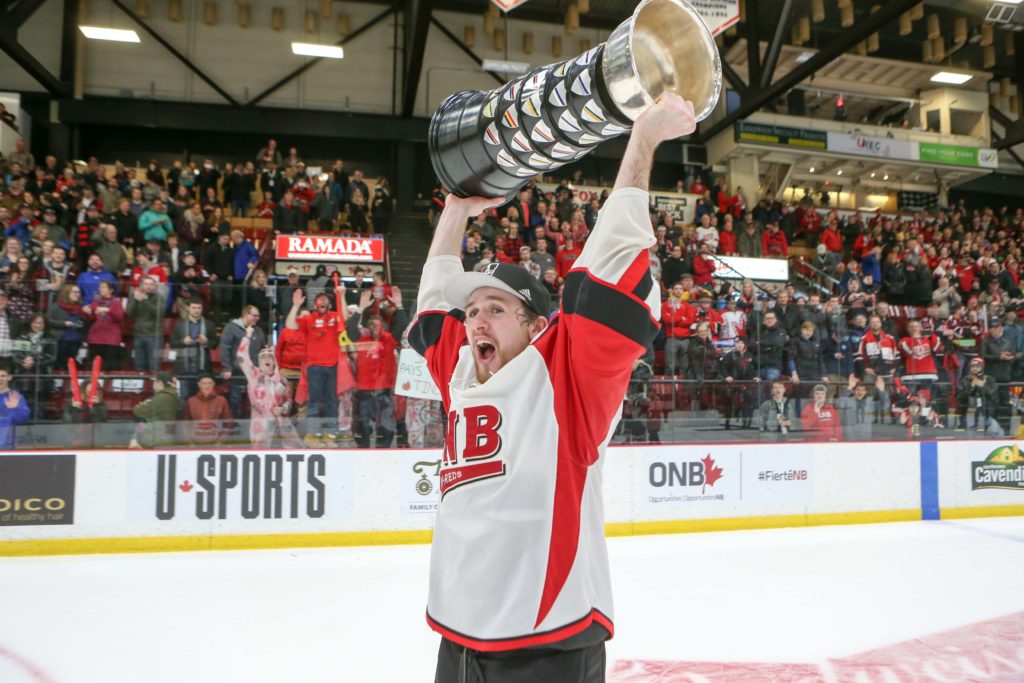 Decorated is one way to describe Jordan Murray’s University of New Brunswick career.

The Moncton, NB., native collected two USports national titles in back-to-back years to close out his UNB career where he piled up 111 points (34 goals) over the course of 111 games during his four-year stint with the Varsity Reds.

Despite a glittering career in Fredericton, all eyes are looking ahead for Murray.

He got a brief taste of professional hockey at the end of last season as he suited up in five games for the Binghamton Senators registering a goal and an assist.

But now armed with an AHL contract in Belleville, Murray is looking forward to his first full professional season.

“I really want to make sure I stay healthy the whole year as the season is a lot longer than what I played at UNB,” Murray said. “It was a good experience playing in a few pro games last season but I’m looking forward to playing the whole year in the AHL and improving as a player.”

Despite only getting a taste of professional hockey last season, Murray was quick to notice the differences between professional and university hockey.

“There’s a lot more free time in pro hockey,” Murray said. “In school you had classes too but in pro it’s a more strict schedule.

“You also need to look after yourself more as a professional as in school you only had two games a week — in the AHL you’re playing 3-4 times a week.”

Murray will get a jumpstart on the season as he heads to Toronto this weekend as part of the Ottawa Senators’ Rookie Camp squad where the Sens will face off against Montreal on Saturday before facing the host Maple Leafs on Sunday at Ricoh Coliseum.

“I just want to go in a have a good camp,” Murray said. “It’s important to perform right from the start and make a good impression but at the same time I’m a competitive person so I’m going there to win too.”

The Belleville Senators will open its season on Oct. 6 against the Laval Rocket at Place Bell before playing their home opener at the recently renovated Yardmen Arena on Nov. 1 against the Syracuse Crunch.

Season Tickets are the best way to enjoy the American Hockey League’s debut in Belleville at the best possible price with great seats still available for the inaugural 2017-18 AHL season. For more information head to www.bellevillesens.com

The Belleville Senators are an American Hockey League franchise set for their inaugural season in 2017-2018. The team serves as the primary professional development affiliate of the Ottawa Senators in the National Hockey League. Upon their relocation to the Bay of Quinte area, the team will play its home games in the newly renovated Yardmen Arena. You can follow the Belleville Senators on our official Facebook, Twitter and Instagram pages via @BellevilleSens, or visit us at www.bellevillesens.com for more information.