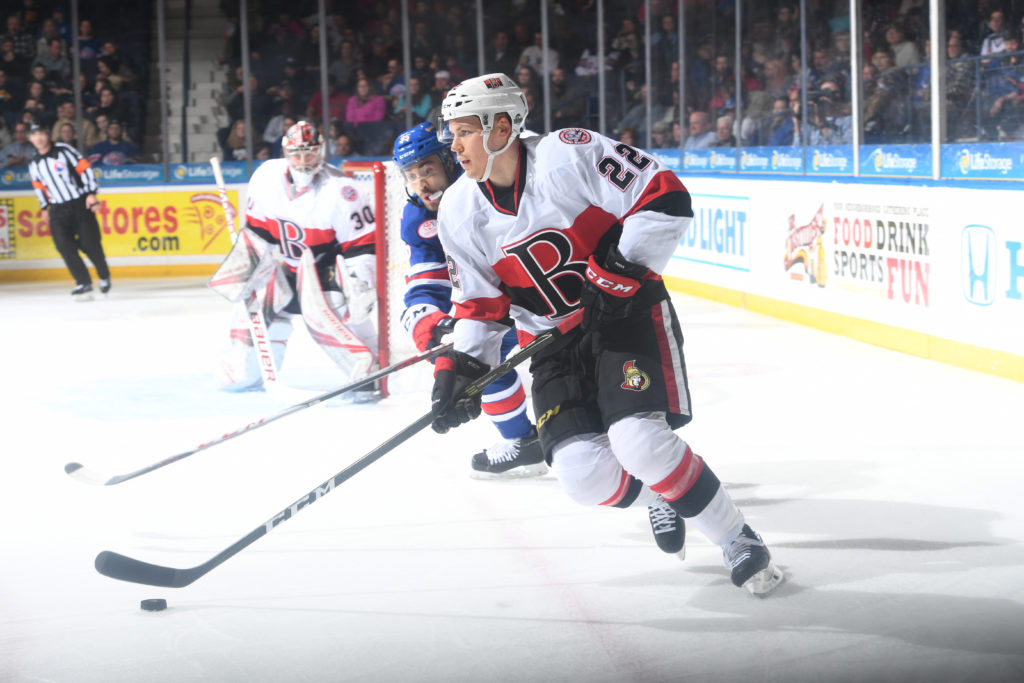 Leading 4-3 entering the third period, the Senators gave up the tying goal just nine seconds into the frame as O’Regan skated in and beat Gustavsson high on his glove side.

The Americans took its first lead of the night at 11:49 on Porter’s 17th of the year as he buried the game-winner in the slot before Blackwell secured the two points with 40.2 seconds left with an empty-netter.

Belleville had jumped out to a 3-0 lead in the first period that was started by Scarfo who scored his first career professional goal on a rebound after good work down low by Ethan Werek 5:02 into the game.

The lead was doubled 2:52 later on Moutrey’s second goal with Belleville as he took advantage of a Rochester defenceman slipping to wire a wrister past Ullmark before Chlapik grabbed his 11th of the year at 10:12 to make it 3-0.

Rochester got on the board at 13:29 on Bailey’s first of the night before scoring his second at 3:34 of the second period to cut the Belleville lead to 3-2.

However, Gagne notched his 20th of the year on a nice spinning wrister that beat Ullmark low to make it 4-2 Senators at 14:20 before Fasching cut the Sens lead to one heading into the third period on a goal with 21 seconds left in the period.

Moutrey played in his 150th career AHL game and recorded his first multi-point game as a Senator.

Belleville will play its home finale Saturday night against the Utica Comets where fans will be recognized as part of Fan Appreciation. Tickets are available by clicking here.