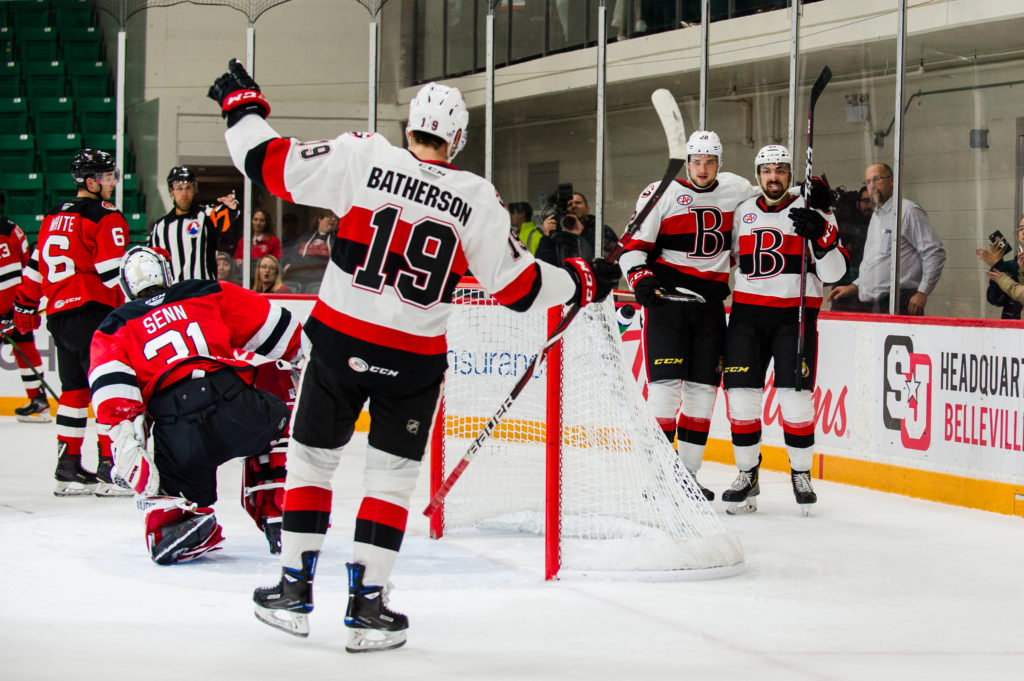 Drake Batherson buried the overtime winner at 4:32 to give the Belleville Senators a 5-4 win over the Binghamton Devils.

Belleville’s Logan Brown (2), Jack Dougherty and Nick Paul scored in regulation while Filip Gustavsson made 23 saves in his first start of the season. Chris Conner, Brett Seney, Ryan Schmelzer and Michael McLeod had goals for the Devils while Gilles Senn stopped 25 shots.

In the extra frame, Batherson streaked in and beat Senn with a nifty move to cap a memorable night with 28 seconds left as he had a four assist night too.

Tied at 3-3 heading into the third, the Senators nearly grabbed the lead through JC Beaudin as he hit the post from the right slot, but Binghamton restored its lead at 5:43 as McLeod tapped in Conner’s pass from the corner after he had driven the net for a 4-3 advantage.

Belleville once again hit the post as this time Klimchuk was the unlucky Senator but they found their tying goal with 4:20 to play through Paul who buried a beautiful wrister up past Senn’s blocker to make it 4-4 to send the game to overtime.

It took all of 47 seconds for the Devils to jump ahead as Conner buried a rebound in-tight after Gustavsson had turned away Joey Anderson’s initial shot as he scored against Belleville for the second time in as many nights.

The Devils doubled its lead as with Jack Rodewald in the penalty box Seney buried his second of the year on a rebound at 11:45 for a 2-0 advantage.

Belleville nearly got on the board in the closing stages as Drake Batherson’s one-timer was denied before Michael Carcone hit the post as the Sens went into the first intermission down 2-0.

The Senators got on the board at 3:55 of the second as Jordan Murray’s point shot was tipped by Batherson, and then Brown, to get through Senn for his first goal of the season.

The one goal deficit was short-lived as with the Sens on the power play, Murray was penalized for a questionable hit that set-up a 4-on-4 that saw Schmelzer beat Gustavsson on a partial breakaway at 7:06.

Belleville came roaring back though as Brown grabbed his second of the game as he buried Nick Paul’s centering pass from literally inside the crease at 9:19 before Dougherty bagged his first in a Sens jersey with 1:39 left in the period as a rolling puck found him in the slot before unleashing a wrister past Senn.

Murray registered his 50th career point with Belleville while Paul played his 100th game for the Sens.

The Sens return to action Friday night when they host Hershey for the only time this season. Tickets are available by clicking here.