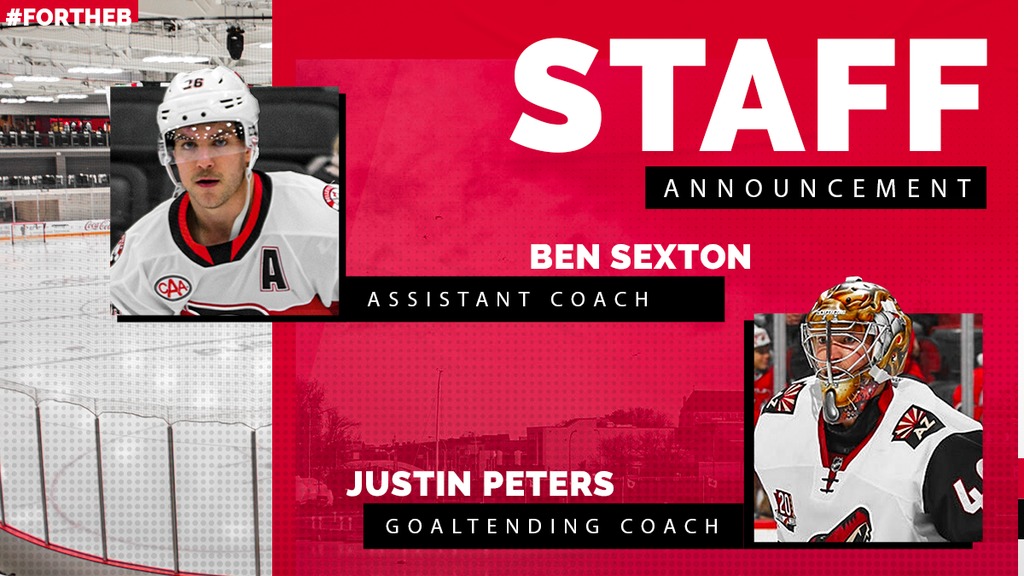 The Belleville Senators have announced two additions to the team’s coaching staff ahead of the 2021 season. Former Senators forward Ben Sexton will join the team as an Assistant Coach, while former NHL and AHL goaltender Justin Peters has been named Goaltending Coach.

Sexton joins the coaching staff fresh off of his retirement from professional hockey in 2020. The Ottawa, Ontario native was drafted by the Boston Bruins in 2009. Prior to joining the Bruins’ AHL team in Providence, he played four years at Clarkson University for the Golden Knights, where he captained the team in both his junior and senior years. After college, he had a successful AHL career, suiting up 200 games and recording 90 points. Sexton played with Providence, Albany, Belleville, and Wilkes-Barre. He served as an Assistant Captain while playing in Belleville during parts of two seasons, where he tallied 30 points in 47 games.

“Fresh off of playing, Ben knows what the players are going through on a day-to-day basis,” said Troy Mann, Head Coach of the Belleville Senators. “He is familiar with the organization already having been here for parts of two seasons in Belleville playing for me. He’s exactly the type of person we want to have to work with our young forward core.”

Peters joins the Senators coaching staff coming off of a successful professional hockey career which saw stops in the NHL, AHL, and ECHL. The Blyth, Ontario finished his career off with brief stints in the KHL, DEL, and the Czech Republic League. He was drafted 38th overall by the Carolina Hurricanes in the 2004 NHL Entry Draft. He went on to start 68 games in the NHL, recording 25 total wins. Those 68 starts came with Carolina, Washington, and Arizona. In the AHL, he had 134 wins and 17 shutouts.

“Justin had a solid playing career with a plethora of experiences at all levels of professional hockey including the NHL,” Mann said. “We went to the Calder Cup Final together in Hershey in 2016. He is ready for this new challenge and we look forward to him positively impacting our young goalies in the organization.”