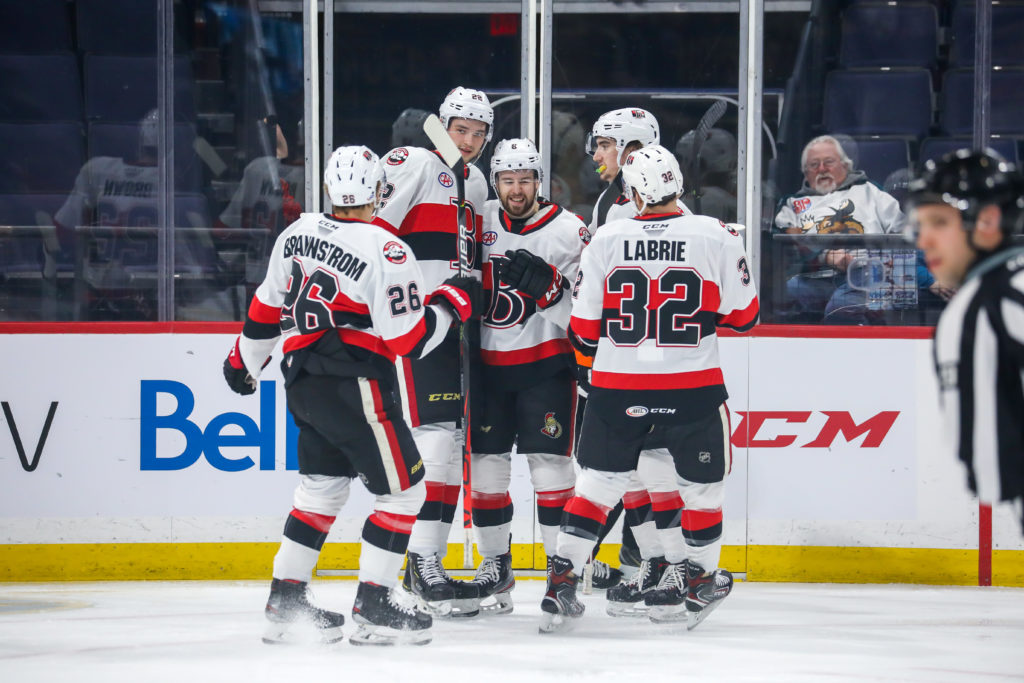 Michael Carcone had a hat-trick as the Belleville Senators made it three straight wins on its mammoth road trip after a 5-3 win over the Manitoba Moose.

It took all of 86 seconds for the Senators to open the scoring through Carcone as he protected the puck down the right wing before cutting above the crease and sliding the puck under Comrie’s right pad.

Reichel tied the game at 2:41 on a backhander out front but 59 seconds later Carcone’s second of the period restored the Senators’ lead as he hammered in a rebound. Manitoba squared things up again at 8:36 through McKenzie’s eighth of the season but Carcone’s third of the frame at 16:08 completed his hat-trick on the power play and a 14:42 hatty.

The second was a much quieter period that saw just one goal — although Carcone nearly had a fourth goal as he hit the post — with Kelly grabbing his fifth of the season at 10:12 as Logan Brown poked the puck out into the slot for the rookie to hammer home for a 4-2 lead.

White made it a one-goal game with 4:46 to play as he was on hand to deposit a rebound after Daccord had denied Reichel with his right pad but Formenton secured the two points with an empty-net goal with 2:13 left in regulation.

Carcone’s hat-trick was the fastest in Senators history from the start of a game (16:08) as well as the quickest from time of first goal to third goal (14:42). Brown registered a career high four assists in the game.

The victory sent the Senators to the top of the North Division with 49 points.

Belleville is back in action Wednesday night when they face Manitoba once again. The Sens aren’t home until Jan. 25 when they host the Comets on Bell Let’s Talk night. Tickets are available by clicking here.