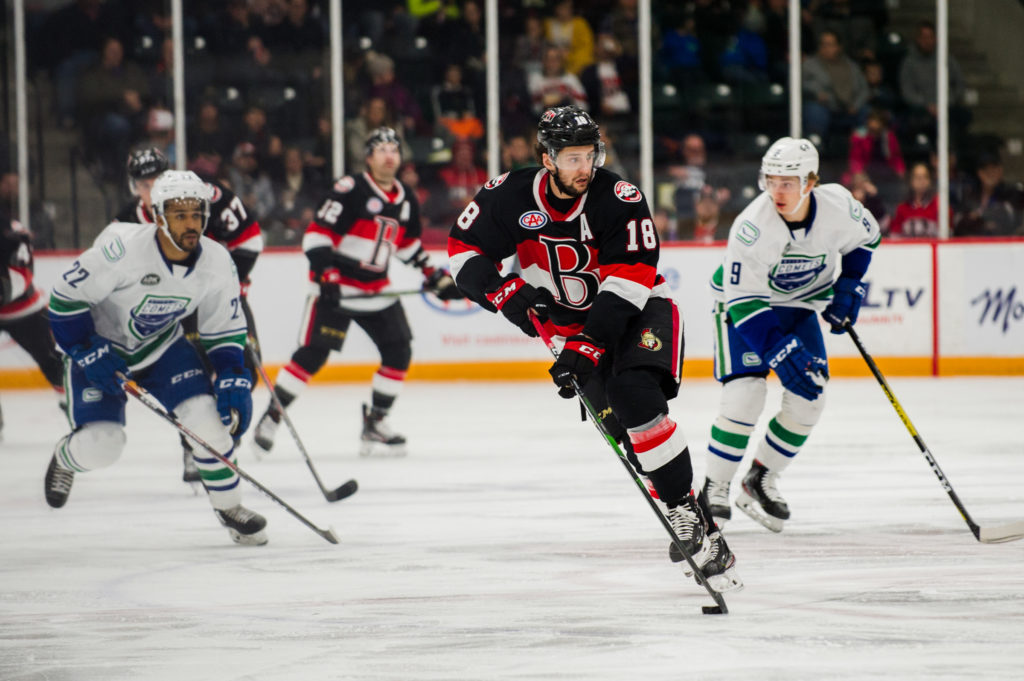 The Belleville Senators were beaten 6-3 by the Utica Comets Friday night at CAA Arena.

Utica’s Malone opened the scoring 6:03 into the game on a backhander out front after the d-man Stefan LeBlanc had driven to the Senators goal line.

LaBate found the equalizer at 16:09 as after Max Lajoie’s shot from the point was blocked, the Sens veteran was on hand to tuck in his ninth of the season after a scramble out front. However, it took Utica 100 seconds to re-take the lead as Camper found himself all alone in front of Daccord and took his time to beat the Sens goaltender for his eighth of the campaign.

Sens rookie Alex Formenton took a five-minute major with 41 seconds left in the first and Utica used that man advantage to benefit 35 seconds into the second period as Bailey banged in a rebound for his 25th of the year and a 3-1 lead.

Belleville cut the deficit to one as Balcers scored short-handed on the same penalty at 3:43 on an odd-man rush but Bailey’s second of the night at 7:41 made it 4-2 as he beat Daccord five-hole.

Archibald made it a one-goal game once again with 3:16 left in the period as he went bardown in his first game back with the Senators after being acquired from Toronto Wednesday evening.

Utica pushed its lead back to two at 11:17 of the third through Lind on a breakaway before Baertschi scored backdoor on a 5-on-3 power play at 13:43 to make it 6-3.

Belleville is back in action tomorrow night when they host Manitoba. Tickets are available by clicking here.