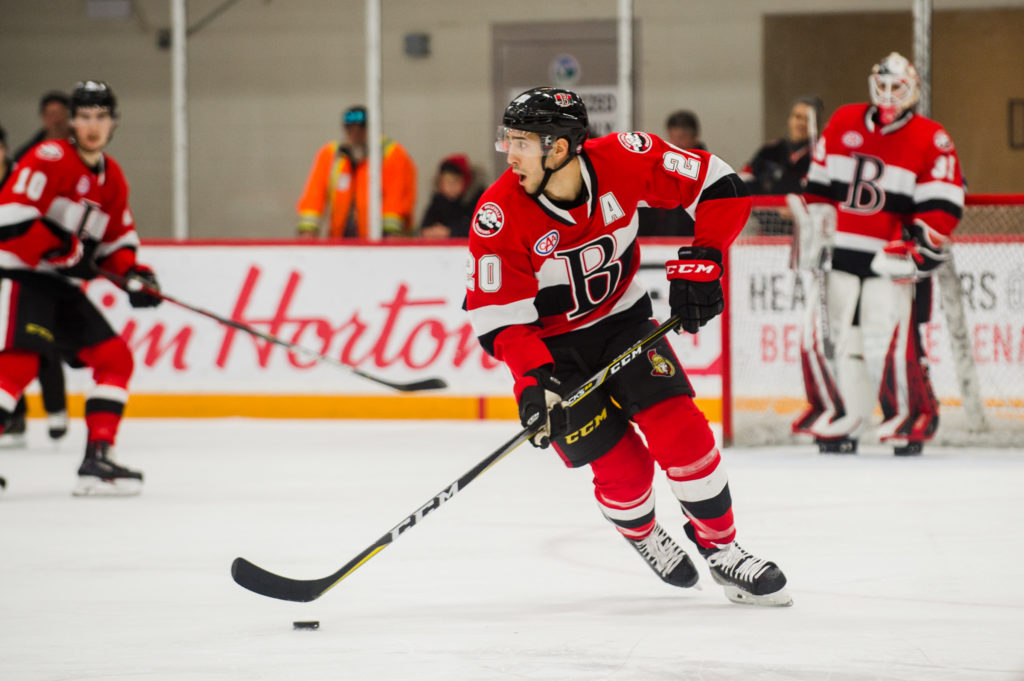 If you want to play in the best summer league, then Eastside Elite Hockey is the only choice.

Want to take a faceoff against Detroit Red Wings all-star center Dylan Larkin? Or how about you try to defend Senators forward Vladislav Namestnikov. Or, maybe you want to try your luck against the Blue Jackets’ Zach Werenski. Or perhaps you join forces with the Belleville Senators’ own Josh Norris?

After starting 11 years ago in Michigan by NHL veteran Steve Oleksy, current Sens defenceman Frank Corrado is helping grow the ESE Hockey brand by bringing it to Toronto.

“Steve started it as a summer league for pro guys to come back and play some summer hockey,” Corrado said. “He’s done a great job of growing it throughout Michigan and has some really good players playing. It’s become a pretty big thing in the community there and he’s grown it to the point where he does a big all-star game that raises funds for various charities.

“It’s now something we want to try and do in Toronto.”

Corrado and Oleksy did a mini trial run in Toronto last summer where they had 40-50 players come out and play games. Although it was last minute, they put together four teams featuring players from the NHL, AHL, CHL, Europe and Canadian universities.

“We’d like to build on that now and provide a great service to our players so that they keep coming back for more,” Corrado said. “There really isn’t anything like this in Toronto yet in terms of a pro summer league. We thought given Steve’s background in Michigan and how successful it’s been we thought we could provide something like that in Toronto because there’s just so many players that live in the GTA in the summer.”

Very excited to show off our new look as @esehockey pro summer league will be back for Season 2 this summer in Toronto. @stevenoleksy and I are excited to grow @esehockey in Toronto and provide a fun competitive environment for pros to play in the summer. We will have more details in the new year, but we can’t wait to build the league, make it a great experience for everyone and build off what we started last summer. Wishing all the boys a great season and can’t wait to see you all when you get back.

Corrado himself is one of the many pro players who live in the GTA. He himself got to rekindle relationships with ex-teammates. His whole partnership with Olesky began as former teammates with the Toronto Marlies and Wilkes-Barre/Scranton Penguins. And seeing guys you’ve lost touch with is as much as an important factor as playing according to Corrado.

“It’s such a great way to come home, play with guys they don’t get to see very often or guys they’ve played with in the past and really enjoy the fun of the game and not have any pressure or outside commotion going on,” he said. “At the end of the day we’re doing this more for the guys; this isn’t for us.”

Sens rookie sensation Norris is one of the many players who took part in Michigan last offseason. The Oxford, MI., native played on a team (named Lactigo) that also featured fellow Sens prospect Jonathan Gruden as well as former NHLer Todd Bertuzzi.

“It’s pretty cool for younger guys to lineup against NHLers,” Norris said. “Obviously they have really high skill and you can learn some things in the summer from them and just have fun and kind of chat with them. It’s certainly cool to lineup against some of the best players in the world.”

The league made headlines last summer when Antonio Stranges of the OHL’s London Knights pulled off an insane shootout move during the All-Star game. And that’s what Corrado and Oleksy want the league to provide too; allow guys to make a name for themselves. It’s one of the many benefits ESE Hockey is providing to its players.

“It was a good way to stay connected and stay in shape and try to play games that are similar to the regular season so it’s a great idea for the summer,” Norris said.

With the Toronto expansion in full swing, Corrado wants to be more proactive in finding guys to join the league this summer. Players can register as independents but Corrado is hoping for guys to pull together and register as teams. There’s no set goal on how many players or teams they’re looking to add but the 26-year-old is keen to see the league grow in Toronto in year two after a solid start last summer.

“This year we’re going to be a little more assertive in trying to reach out to guys we don’t have relationships with and earn their trust and show them what a good experience it can be,” Corrado said.