Davidsson chasing one dream with his younger brother 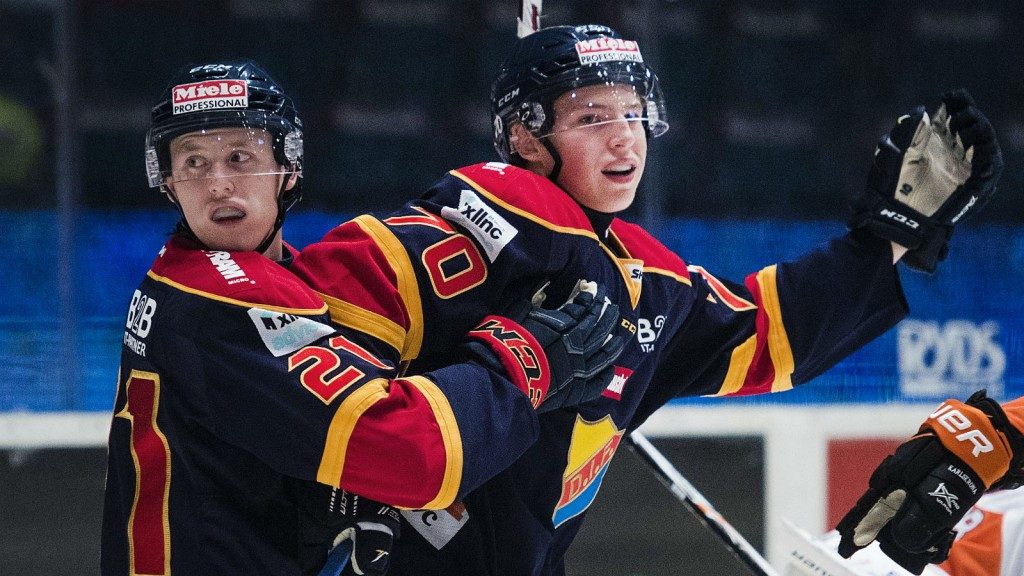 Two brothers now divided by the North Sea and the Atlantic Ocean.

For the first time in three years, Jonathan Davidsson isn’t hitting the ice every night with his brother Marcus.

Instead, Jonathan is playing his first season in North American with the Ottawa and Belleville Senators while his younger brother Marcus continues to play in the Swedish Elite League.

“Now when I look back at it, it was the most fun I’ve had in my whole life,” Jonathan said of playing with his brother. “Having him there on every shift, being on the same line and playing together in every situation was huge.”

The two spent three full years playing for Djurgardens beginning in 2016. Jonathan made 133 appearances; Marcus 136. They combined for 121 points.

Now they’re both on different teams. Jonathan has played six games for Ottawa and another 18 for Belleville while battling some injuries. Marcus has played 29 games for Vaxjo of the SHL after signing a two-year deal with them in the summer.

According to Jonathan, the two Davidsson’s would make a big difference when they hit the ice together.

“We play a lot alike,” he said. “Marcus is a bit stronger, he’s big, he uses his body a bit more while I use my feet a bit more and we both like to attack the net. It was a fast line when we were out there together.

“We acted as mentors on both sides: he helped me, I helped him. Once we knew something that could help us we’d chat about it. It was great.”

Getting drafted was quite the wait for Jonathan and not because he wound up going in the sixth round to Columbus in 2017.

More so because he had been passed on in the two previous drafts since he was first draft eligible in 2015.

So, perhaps being drafted in 2017 was destiny for these two brothers. Not only was Jonathan drafted by the Blue Jackets, Marcus was selected 37th overall by Buffalo.

“I was only looking at the draft to see how it went for Marcus and once he went in the draft I turned it off,” Jonathan said of his draft night.

“Marcus was even more proud of me because he knew there was two years I was missed in the draft,” he continued. “That was pretty tough for me but he seemed even more happy than I was that I got drafted but of course we were both very happy.”

You might think two brothers being drafted in the same draft is rare and you’d be right. The Davidsson’s are one of 19 pairs of brothers to be selected in the same draft since it started in 1963. Oddly enough, former Sens head coach Kurt Kleinendorst also holds that honour from 1980 with his brother, Scot, who recently tragically passed away.

With NHL teams holding both their rights, and Jonathan having made his NHL debut on Nov. 7, their childhood dream is a lot closer to reality: play together in the National Hockey League.

“Our biggest dream is to play on the same team in the NHL,” Jonathan said. “I don’t know if it will happen but we have that as our goal. It would be amazing to play against him too if we had to.”

Just about 18 months separates Jonathan (22) and Marcus (21) in age. But competition between them has always been there.

Growing up, they played five sports including soccer, tennis and golf. They would battle it out playing bandy after school. They played the typical video games (and still do). “Every day was a challenge,” Jonathan said.

As the two brothers pursue their individual hockey careers, a six-hour time difference now separates them. “I try to call him every day especially when I have something on my mind,” Jonathan said.

Their profession occupies them for six plus months of the season. But that doesn’t stop the two brothers from looking ahead to summer together.

“It’s great to have little trips planned in the summer,” Jonathan said. “We’re outdoor people. We like to go on fishing trips.

“We’re going to go get our hunting license in Sweden and enjoy nature and the beautiful Swedish forest.”