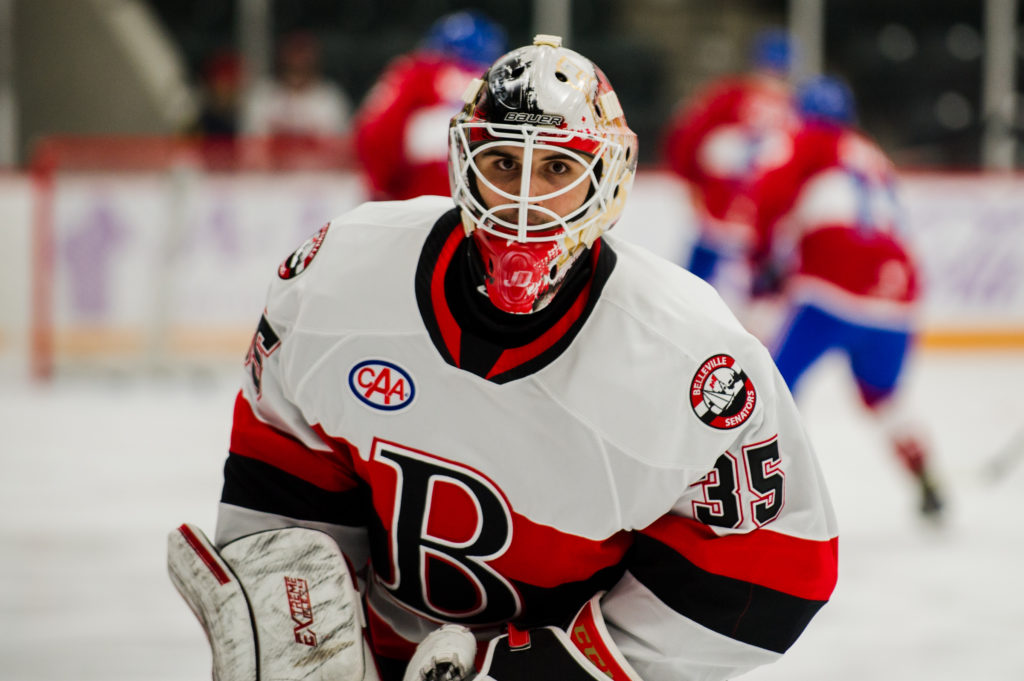 Safe to say Joey Daccord has racked up the air miles this year.

His playing career has gone from Arizona State to Ottawa to Brampton and now to Belleville. And that doesn’t include the trips home to Boston or the training camps he’s participated in.

But you won’t find the 23-year-old goalie complaining.

“It’s been pretty crazy but I’ve tried to stay in the present moment and not look ahead or behind and just stay where I am at the exact moment,” Daccord said. “Right now, I’m in Belleville and taking every opportunity I can here to keep getting better and working hard.”

His Belleville career got off to a perfect start Saturday night as he made 26 saves in his AHL debut in a 3-1 win in Hershey to help push the Sens’ win streak to five games.

“It was awesome,” Daccord said. “It was really nice to get a win in my first game. The guys played awesome. I just had a lot of fun out there in front of a big crowd so it was a cool experience.”

After concluding his ASU days in March, Daccord, a seventh round pick by Ottawa in 2015, made his NHL debut on April 4 against Buffalo making 40 saves in a losing effort.

In the process, Daccord became the first ever ASU hockey graduate to play in the NHL. No small feat for a player who received just one scholarship out of high school. After his start Saturday for Belleville, he’s also now the first Sun Devils alumni to play in the AHL.

After leading Arizona State to its first NCAA Tournament, Daccord headed into his first pro season in a head-to-head battle with Filip Gustavsson for the Belleville backup job. He ultimately wound up being the odd man out and has since played 11 games for the ECHL’s Brampton Beast where he has a 6-5 record with a 3.02 GAA.

“Going down to Brampton gave me a chance to play and learn how to be a pro a little bit and get use to the pro life,” Daccord said. “It was good for me to go down there and play a lot of games and it really prepared me for that first AHL start.”

Daccord says the AHL game is faster and more structured than the ECHL but having to spend time in Brampton was a good thing for his development.

“It put me in a state mentally where I knew I had to compete and take what was given to me and use it to the best of my advantage and that was to go down to Brampton to play a lot of games. It definitely motivated me to work as hard as I can and do whatever I could do to get back up here as soon as possible.”

As for collecting that first AHL win, the smile wouldn’t leave Daccord’s face every time it was mentioned.

“It was honestly just really fun. I had an awesome time playing out there. Hopefully it’s the first of many.”