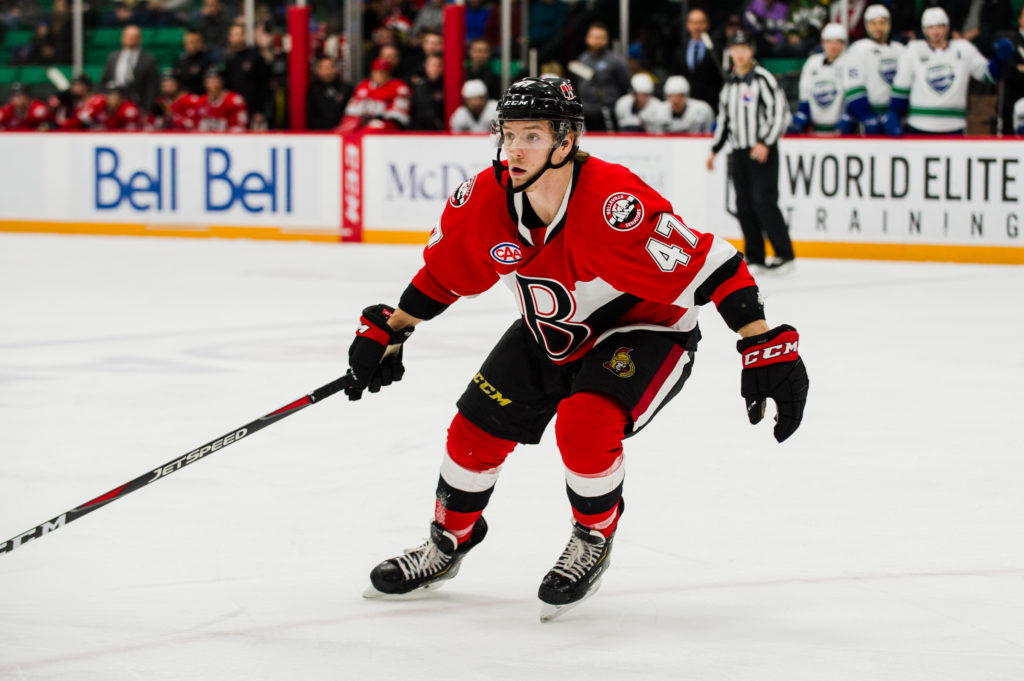 The Belleville Senators return home for a North Division contest as they host Utica at CAA Arena tonight.

The Senators (34-15-4-1) stormed back Wednesday night to beat Rochester in overtime to push its lead atop the North Division to eight points over the Amerks. The Sens are currently 16 points clear of fourth place.

The Comets (28-20-2-3) are third in the North and trail Belleville by 12 points. The Comets have lost its last two contests.

Lots of changes to the Sens since Wednesday as the team acquired former Senator Darren Archibald from the Marlies while Ottawa traded for Aaron Luchuk and assigned him to Belleville too.

Joey Daccord has started both games so far this week but expect him and Filip Gustavsson to split the weekend’s starts.

Belleville is 3-2 this season against Utica. The Sens have won the last three games after dropping the first two meetings. The teams will meet two more times this season after tonight.

Rudolfs Balcers has three points in his last two games and in his second season with Belleville, has 33 points (14 goals) in 31 games.

Brogan Rafferty continues to lead all AHL defencemen in points with 39. Thirty-three of his points have come via assists.

Friday’s game starts at 7pm and can be seen LIVE on AHLTV. Follow the Belleville Sens on Twitter for live updates. Tonight is History of AHL night presented by Gay Lea and will feature AHL Hall of Famer Brad Smyth. Tickets for tonight’s game are available by clicking here.

The radio broadcast on CJBQ 800 begins at 6:55pm with David Foot on the call.