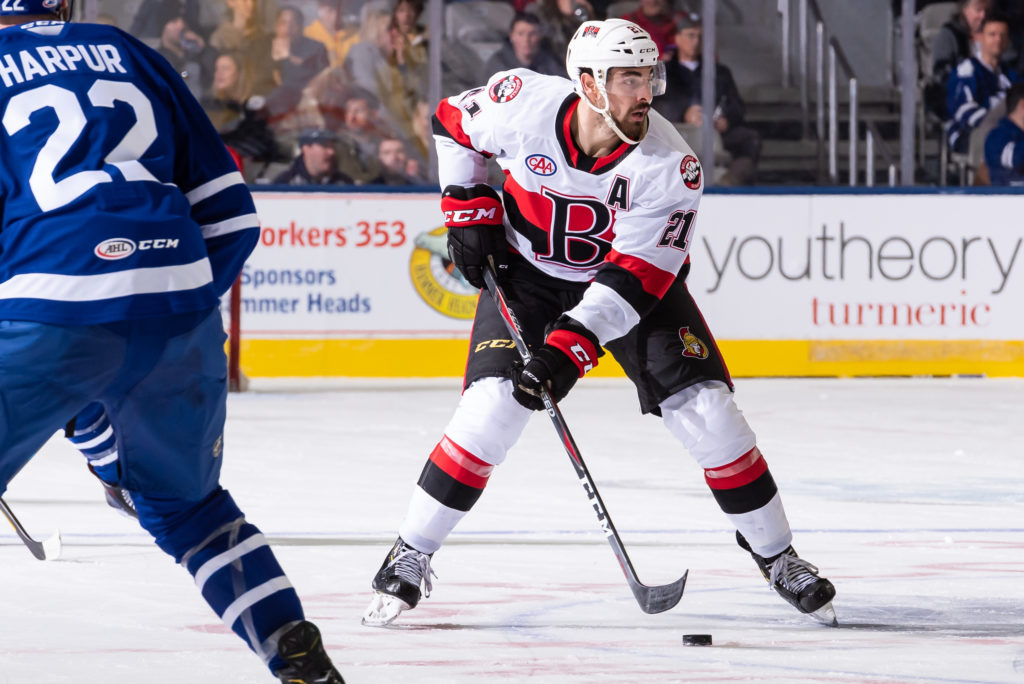 The Belleville Senators are back home for the first time in 2019-20 as they host the Binghamton Devils at CAA on Opening Night presented by CAA Insurance.

The Senators (0-1-0-0) are coming off of a 4-1 loss on opening night against Toronto. Special teams will be an area of focus for the Sens after they went 0-for-4 on the man advantage while giving up two power play goals last Saturday.

Binghamton (0-1-0-0) fell 4-3 to Utica on opening night as they had a disastrous second period giving up four goals.

One game into the season and there’s already been numerous changes to the Sens’ roster. Drake Batherson and Filip Chlapik were reassigned to Belleville earlier in the week while Vitaly Abramov was recalled. Furthermore, defenceman Nick Ebert was traded to New York on Monday.

The Sens will be without defenceman Hubert Labrie as he will miss tonight’s game, as well as Saturday’s, due to suspension after an elbowing incident against Toronto.

That means Jack Dougherty and Jonathan Aspirot will draw into the line-up as the Sens have just six d-men available. Aspirot would be making his professional debut when he hits the ice.

Marcus Hogberg is expected to start between the pipes for the Sens.

The Senators are 7-6-0-1- all-time against Binghamton and hold a 5-2 record all-time at CAA Arena over their North Division rivals.

These two teams met in Belleville’s home-opener last season with the Sens prevailing 5-2.

Batherson, who made Ottawa’s team out of training camp and played in their first two games, is back with Belleville for the time-being after being reassigned Sunday. Batherson shattered not just rookie, but team scoring records, in 2018-19 where he had 62 points (22 goals) in 59 games.

Nathan Bastian got a taste of the NHL last season scoring three times in seven appearances with New Jersey and in his team’s lone game this season, the Kitchener native had a goal and an assist.

Friday’s game starts at 7pm and can be seen LIVE on AHLTV. Follow the Belleville Sens on twitter for live updates.

The radio broadcast on CJBQ 800 begins at 6:50pm with Jack Miller on the call and David Foot on colour. Ticket’s for tonight’s game are available here.

Details on the Sens’ Opening Night presented by CAA Insurance can be found here. The festivities begin at 4pm with Fan Fest that includes player arrivals, face-painting, live music and much more. All paying fans will also receive a FREE #fortheB t-shirt inside CAA Arena too.