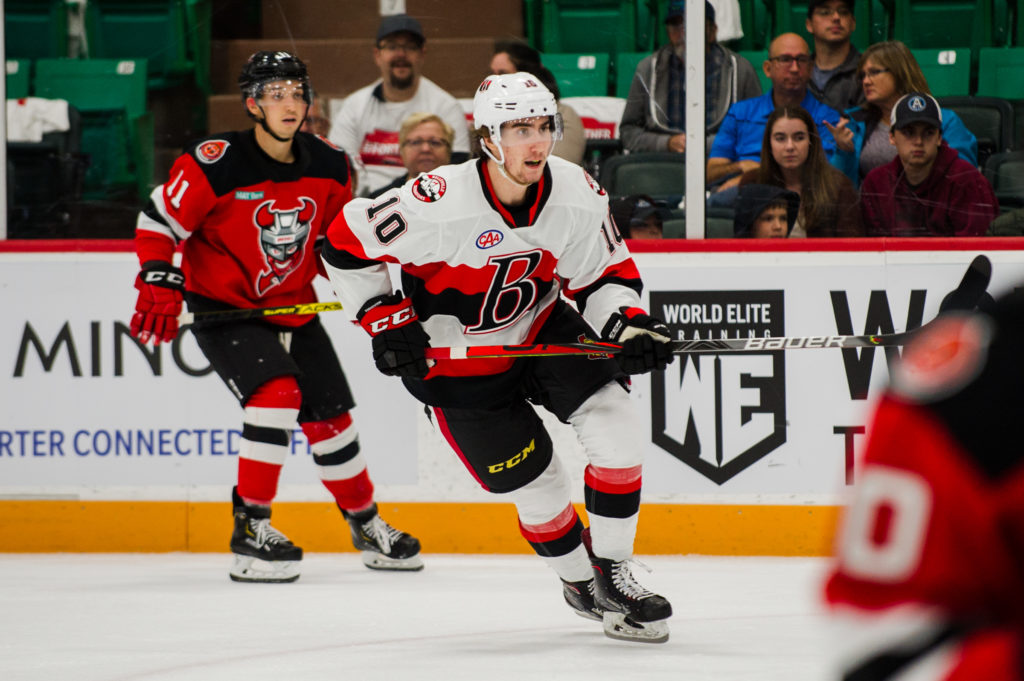 The Belleville Senators will look for a weekend split with the Binghamton Devils as the two North Division rivals meet again tonight at CAA Arena.

The Senators (0-2-0-0) are coming off of a 2-1 loss last night to the Devils. The Sens fell behind early and despite a short-handed goal from Morgan Klimchuk, were unable to find the tying goal. Belleville will be looking to get its power play going as despite some good opportunities, they’re 0-for-9 to start the year.

Binghamton (1-1-0-0) grabbed its first win of the season Friday as rookie netminder Evan Cormier starred in their narrow win.

Belleville head coach Troy Mann has already confirmed that Filip Gustavsson will get his first start of the season tonight after Marcus Hogberg started the first two games of the year. Mann also said there will be at least one, if not two, line-up changes for tonight’s rematch.

Defenceman Hubert Labrie is still out as he serves the second game of his two-game suspension.

The Senators are 7-7-0-1 against Binghamton in 15 contests. Last night’s loss for Belleville was their first ever loss in their home-opener.

Klimchuk made his season debut Friday and scored short-handed. In just nine games with Belleville, Klimchuk has five goals.

Chris Conner, who spent the last four years with Lehigh Valley, opened the scoring for the Devils last night and now sits just two shy of 200 for his AHL career as he also approaches 700 career games in the league.

Saturday’s game starts at 7pm and can be seen LIVE on AHLTV. Follow the Belleville Sens on twitter for live updates.

The radio broadcast on CJBQ 800 begins at 6:50pm with Jack Miller on the call and David Foot on colour. Ticket’s for tonight’s game are available here.