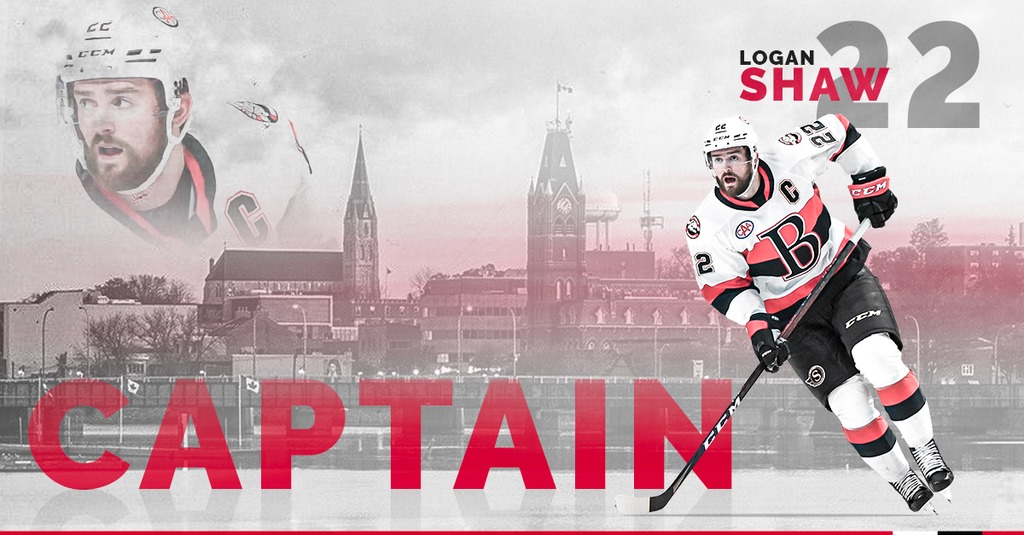 Forward Logan Shaw has been named as the 4th Captain in Belleville Senators history today, in advance of Wednesday’s home opener.

Born and raised in Glace Bay Nova Scotia, Logan Shaw split 2019-20 playing time with the Winnipeg Jets and the club’s AHL affiliate, the Manitoba Moose. He recorded five points (two goals, three assists) over 35 contests with the Jets and seven points (four goals, three assists) and 10 penalty minutes over 16 games with the Moose. He was drafted 76th overall by the Florida Panthers in the 2011 NHL Entry Draft, and has been playing in the AHL and NHL since 2013. Shaw joined the Sens in 2021.

In speaking about being named Captain for the first time in his professional career Shaw spoke highly of his parents and the way he was raised being major contributors to his leadership abilities.

“It means a lot to them, as it does to me. It’s the way I was raised to always be a good person first and as much as it is an honor for me, its also an honor for my parents as well.” Shaw continued; “Just being where I am right now in general I am very proud, a lot of hard work has gone into it but being recognized as a leader on the team is a huge accomplishment for me.”

One of the things that made the decision for Head Coach Troy Mann and the coaching staff was Shaw’s professionalism during the first 4 games and series of practices over the first part of the shortened season. “Logan Shaw is a consummate professional,” describes Mann, “I love his demeanor, it’s perfect for this young group that’s come in this season. Things are different this year, there are a lot of obstacles and adversity on a daily basis and routines are different. We needed an older guy who’s been around and seen all levels and faced adversity to be able to lead the group, and that’s Logan Shaw.”

Shaw is ready for the challenge of bringing a team together without the regular activities for team building and support due to COVID-19. “Its going to be tough to do those little things that normally bring a team together,” said Shaw. “All of what we are doing is at the rink. I think as long as I can make sure everyone feels welcome and feels part of the team, that’s where it starts.”