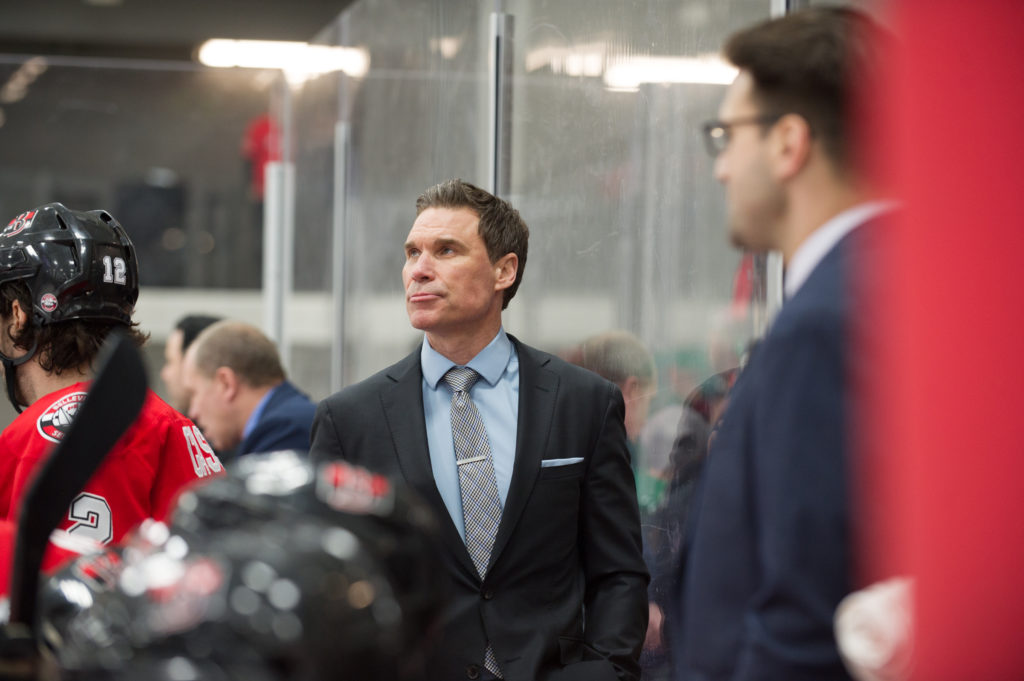 The Belleville Senators are two games past the mid-point of the 2019-20 season where they sit in a tie for first place in the North Division with a 23-13-3-1 record.

Troy Mann’s squad leads the AHL in goals scored with 148 and is tied for the league lead in road winning percentage at .789 and wins (14).

With 36 games to play, Mann discusses the first half of the season and breaks down each facet of his squad as the Senators look to push on for its first ever playoff appearance.

Sitting in a tie for first place two games past the mid point of the season, how pleased have you been with the season so far?

Well certainly the progression has been fantastic so far. To think we started 1-4 and 3-5, it put us in a battle to get to .500 pretty early in the season. Our team had a really great November and a pretty reasonable December. Mentally for me, I was hoping to get out of December 7-4 but we ended up 6-4-1 so we missed out by a point and I think January has gone pretty well so far specifically these last four games on the road trip. Our division is going to be a battle right until the end. Binghamton’s crawled right back into the playoff hunt and we know what that’s like after a year ago when we were five games under .500 at one point. Anything is possible and there’s so much divisional play that you’re never really out of it. We have to continue to plug away and keep trying to get four out of six (points) each week.

With Marcus Hogberg in Ottawa, it seems Joey Daccord has grabbed the reigns in goal with Filip Gustavsson in Belleville too. How would you assess the goaltending so far this season?

I think that Daccord, not that he’s been a pleasant surprise, but certainly we didn’t know what we were getting. We weren’t very familiar with the player besides coming in with a great NCAA career. He had his moments in Brampton when he was fantastic so we knew he was capable of being a good goaltender. Obviously, his numbers speak for themselves. It’s encouraging that he’s been able to play as well as he can especially with Hogberg up because it’s very difficult to win and make playoffs when your number one goalie’s not around. On top of that, I think Gus has progressed as well. He’s coming off of two pretty good starts. I thought his game in Rochester was arguably his best game since I became head coach here.

The blue line has seen a lot of moving parts with injuries, callups and PTOs. All things considered, how satisfied are you with their play?

I think anytime you use 15 defenceman and you’re not at the All-Star break tells you how many D you’ve used and the kind of advertsity you’ve faced. I think there’s been some pleasant surprises. Jonathan Aspirot has come in and has been fantastic for us. I think Frankie Corrado has come in and done a great job and Jack Dougherty has been a guy that, even though Rochester was in our division last year, he wasn’t a real noticeable guy coaching against him and he’s been fantastic. The AHL contracted D have really stepped up that we brought in because, quite frankly, most of our NHL contracted D have not been around very much this year. So, all of a sudden we’ve got a bunch of D available to us and I’m not going to apologize for that right now because we know that things can change in our heartbeat. Certainly, it’s been a pleasant surprise how they’ve played and given us stability to compete and try to win games on a night-to-night basis.

I think we knew this team would score goals, but did you think they’d be leading the league in scoring and have the success they’ve had?

Not with the amount of movement we’ve had. We have some high-end skill and we’ve been able to, for the most part on every night, put three pretty good lines together that can contribute offensively. I think Formenton and Norris have probably exceeded the offensive output at this stage. I think Batherson has come in, and he’s not with us right now, and done exactly what he did last year and same for Brown when he’s been here. So the guys that returned from last year have certainly kept up their end of the bargain in terms of what you anticipated but you’ve got some other production too. Abramov too, he’s had a couple of injuries but at the same time, he has come in and been a point a game player for us. It’s great that we’ve been able to score so much. We do have some great skill and hopefully it can continue and see where it takes us.

Kory Cooper returned on the goaltending side of things, but you had two new assistant coaches in David Bell and Colin Chaulk. How critical to the team’s success have they been?

I thought that Pierre Dorion and Peter MacTavish were great in allowing me to pretty much make my own decisions. They had the final approval but when you’re revamping a staff, you just don’t know. I didn’t have a previous relationship with David but he’s been fantastic to work with. I was looking for some different personalities quite frankly from what we had last year and Bellsy has been one of those guys who is real fun to be around and has been very good with the defence. Chaulker has been a very seamless transition between him and Ryan Murphy. They have a bit of a different personality: Chaulker is a bit more outgoing but at the same time their detail is very similar. One of Chaulker’s strengths is his ability to break down skill development. I don’t think that’s quite my strength so I was looking for someone who could really dive into the skill development of our players and I think that’s been very good from Colin’s perspective.

You always say that every week, the goal is to win the week. How do you keep the message focused short-term but also long-term too?

I think it’s the players job to focus on each game and the short-term events that are coming up in our schedule. It’s my job to worry about what’s coming up in the middle of February and March and so on. I think our players and our leadership group have done a great job of breaking down the season and that’s all you can do.