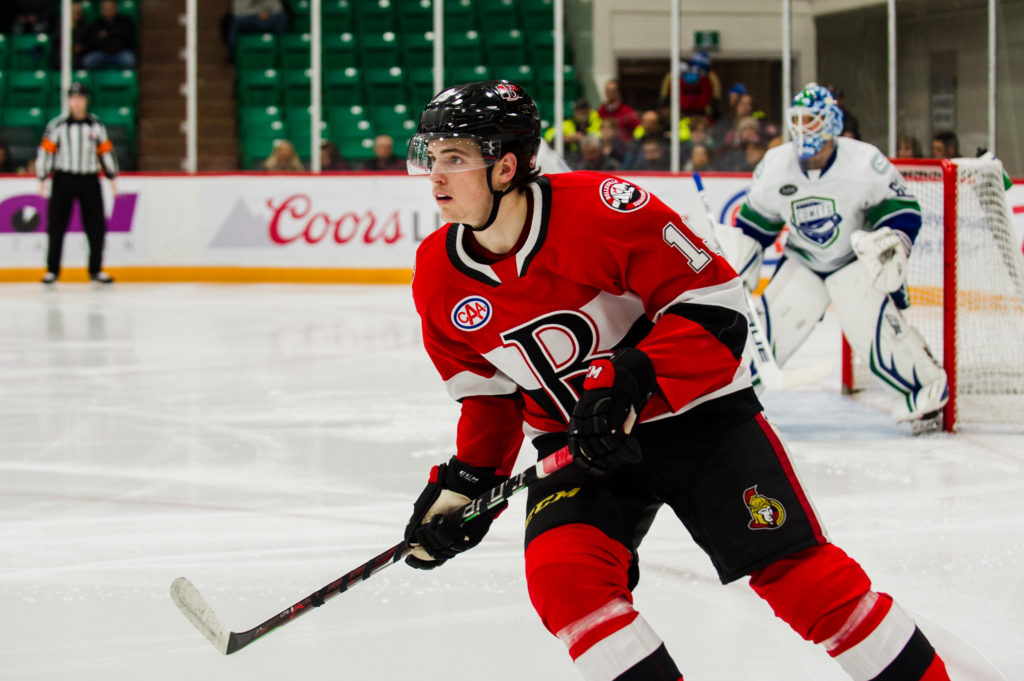 The American Hockey League announced today the 2019-20 AHL First and Second All-Star Teams, as voted by AHL coaches, players and media in each of the league’s 31 member cities. The Belleville Senators have two players awarded the recognition, Josh Norris and Drake Batherson.

Each All-Star Team member will receive a custom-designed crystal award in recognition of his selection to the 2019-20 AHL First and Second All-Star Teams.

The winner of the 2019-20 Fred T. Hunt Memorial Award (sportsmanship, determination, dedication to hockey) will be announced Thursday.

Following a debut season that included AHL All-Rookie honors and a Calder Cup championship, second-year pro Jake Bean led all AHL defensemen in scoring in 2019-20 with 48 points, also good for the Charlotte team lead. Bean recorded 21 points on the power play, and his special-teams play helped the Checkers rank third in the league in efficiency both with the man advantage (22.8 percent) and while shorthanded (87.0 percent). A 21-year-old native of Calgary, Alta., Bean was Carolina’s first-round selection (13th overall) in the 2016 NHL Draft.

Third-year pro Brennan Menell established a career high with 47 points in 57 games for Iowa in 2019-20, finishing second among AHL defensemen in scoring and first in assists (42). The 22-year-old native of Woodbury, Minn., is Iowa’s franchise record-holder in nearly all offensive categories for blueliners, with 101 assists and 116 points in 199 games over his AHL career. Menell signed as a free agent with Minnesota on Sept. 26, 2017, and made his NHL debut with the parent Wild this season, appearing in five games.

One of the AHL’s most prolific scorers over the last several years, Reid Boucher set career highs in 2019-20 with 34 goals, 33 assists and 67 points in just 53 games with Utica, finishing second in the league in overall scoring and first with an average of 1.26 points per game. Boucher authored a 16-game scoring streak from Nov. 23 to Dec. 31 – the longest in the AHL this year – and went consecutive contests without a point only twice all season. A 26-year-old native of Grand Ledge, Mich., Boucher has appeared in 133 career National Hockey League games with New Jersey, Nashville and Vancouver.

Named to the AHL’s All-Rookie Team on Tuesday, Josh Norris was the AHL’s top-scoring rookie in 2019-20 with 31 goals and 61 points in 56 games for Belleville, tying for third in the league’s overall scoring race. Norris, whose father Dwayne was a First Team AHL All-Star himself in 1994-95, also made his NHL debut with Ottawa on Feb. 22 and appeared in three games with the parent Senators. The 21-year-old native of Oxford, Mich., was a first-round choice (19th overall) by San Jose in the 2017 NHL Draft and was acquired by Ottawa in a trade on Sept. 13, 2018.

Fourth-year pro Sam Anas won his first AHL scoring title in 2019-20, finishing on top of the league with 50 assists and 70 points in 63 games for Iowa. The 26-year-old native of Potomac, Md., who was also assessed only five minor penalties all season, racked up 42 points on the Wild power play, the most by an AHL skater in the last six years. Anas, Iowa’s franchise leader in assists (175) and points (267), signed as a free agent with Minnesota on April 15, 2016, after three seasons at Quinnipiac University.

In his first season in the Nashville organization, Connor Ingram ranked third in the AHL in both goals-against average (1.92) and save percentage (.933) while posting a record of 21-5-5 in 33 appearances with Milwaukee. Splitting duties with Troy Grosenick, Ingram earned a share of the Harry “Hap” Holmes Memorial Award as the Admirals allowed the fewest goals in the league (2.24 per game), and made his second consecutive trip to the AHL All-Star Classic. The 23-year-old native of Imperial, Sask., was acquired by the Predators on June 14, 2019, after being selected by Tampa Bay in the third round of the 2016 NHL Draft.

Jacob MacDonald led all AHL defensemen with 16 goals and finished fourth with 42 points in 56 games for Colorado this season, earning his second postseason All-Star Team selection in three years. A 27-year-old native of Portland, Ore., MacDonald placed second on the Eagles in scoring and scored seven goals on the power play, tied for the most among league blueliners. MacDonald was acquired by Colorado in a trade with Florida on June 29, 2019, and recently signed a two-year extension with the Avalanche through 2021-22.

Brogan Rafferty had a standout 2019-20 season with Utica, placing third among all AHL defensemen in scoring with 45 points and first among all league rookies with 38 assists. The 24-year-old native of Naperville, Ill., also posted a plus-17 rating in 57 games and contributed 20 points on a Comets power play that ranked fourth in the AHL. Rafferty, who was also voted to the 2019-20 AHL All-Rookie Team, signed as a free agent with Vancouver on April 1, 2019.

Gerry Mayhew had a career year in 2019-20, scoring a league-high 39 goals – the most by an AHL player in eight years – and posting 61 points in 49 games with Iowa. Mayhew, who potted a league-leading 10 game-winning goals and registered 11 multiple-goal games, also made his National Hockey League debut in 2019-20, notching two goals in 13 outings with Minnesota. The 27-year-old native of Wyandotte, Mich., signed with the NHL Wild on May 10, 2019, after two seasons playing on an AHL deal.

Named the AHL’s outstanding rookie a year ago, Alex Barre-Boulet returned to Syracuse in 2019-20 and led the Crunch with 27 goals and 56 points in 60 games. Finishing fifth in the AHL in scoring this year, the 22-year-old native of Montmagny, Que., is one of only two players to place among the league’s top 10 point-getters each of the last two seasons. Barre-Boulet, who represented Syracuse at the 2020 AHL All-Star Classic, signed with Tampa Bay as a free agent on Mar. 1, 2018.

Drake Batherson was one of the AHL’s top players for the second year in a row in 2019-20, posting 16 goals and 38 assists for 54 points in while skating in just 44 games for Belleville. Batherson finished sixth in the AHL in scoring this season while also appearing in 23 contests for the parent Ottawa Senators, where he chipped in three goals and seven assists. The 22-year-old Batherson, born in Fort Wayne, Ind., and raised in New Minas, N.S., was a fourth-round pick by Ottawa in the 2017 NHL Draft.