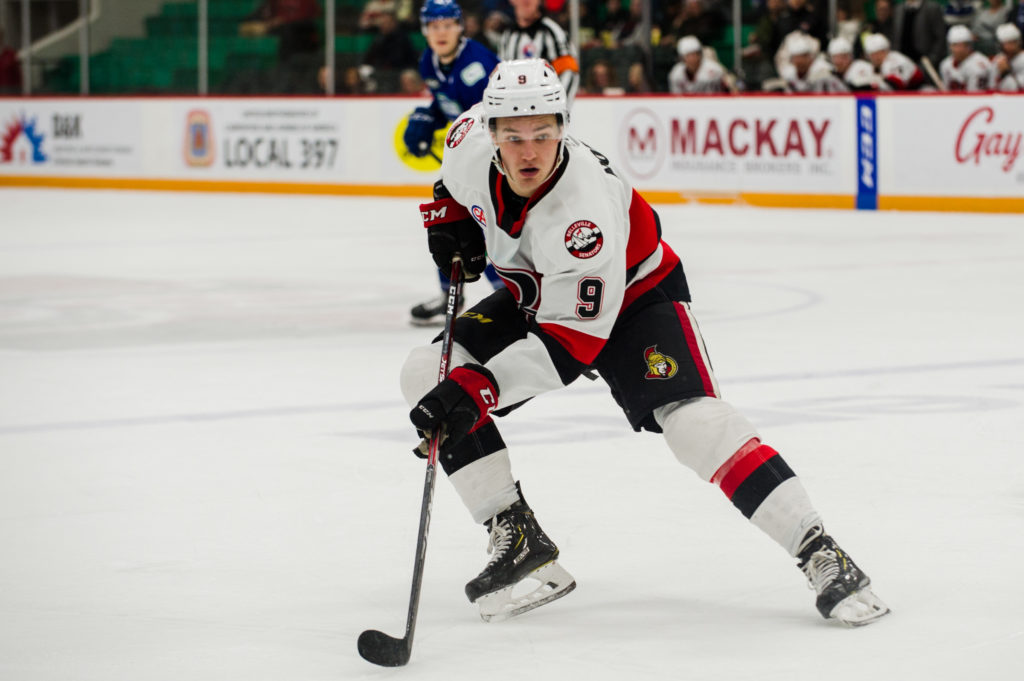 The American Hockey League has announced the 2019-20 AHL All-Rookie Team, as voted by coaches, players and media in each of the league’s 31 member cities. The Belleville Senators have two players awarded the recognition, Alex Formenton and Josh Norris.

Each player will receive a custom-designed crystal award in recognition of his selection to the 2019-20 AHL All-Rookie Team.

The 2019-20 First and Second AHL All-Star Teams will be announced on Wednesday.

Turning pro in 2019-20 after two seasons at Northeastern University, Cayden Primeau appeared in 33 games for Laval and posted a record of 17-11-3 while leading all AHL rookies with a 2.45 goals-against average. Primeau, who also had a .908 save percentage and four shutouts with the Rocket, made his NHL debut with Montreal on Dec. 5 vs. Colorado and earned his first NHL victory with a 35-save effort vs. Ottawa on Dec. 11. Primeau, a 20-year-old native of Voorhees, N.J., was drafted by the Canadiens in the seventh round in 2017.

Joey Keane skated in 58 AHL games between Hartford and Charlotte in 2019-20, totaling nine goals and 28 assists for 37 points while earning a trip to the 2020 AHL All-Star Classic. Originally a third-round pick by the New York Rangers in the 2018 NHL Draft, Keane was acquired by the Carolina Hurricanes on Feb. 18 and amassed seven points in nine games after joining the Checkers. The 20-year-old native of Chicago, Ill., played three seasons of major junior in the OHL with Barrie and London.

Brogan Rafferty had a standout 2019-20 season with Utica, placing third among all AHL defensemen in scoring with 45 points and first among all league rookies with 38 assists. The 24-year-old native of Naperville, Ill., also posted a plus-17 rating in 57 games and contributed 20 points on a Comets power play that ranked fourth in the AHL. Rafferty signed as a free agent with Vancouver on April 1, 2019, and appeared in two NHL games with the Canucks last season.

A second-round pick by Ottawa in the 2017 NHL Draft, Alex Formenton scored 27 goals and added 26 assists for 53 points in 61 games for Belleville in his first full pro season. The 20-year-old native of Barrie, Ont., finished second among league rookies in both goals and points, helping the Senators claim the highest-scoring offense in the AHL. Formenton played his junior hockey with London in the Ontario Hockey League and won gold with Canada at the 2018 IIHF World Junior Championship.

The league leader among rookies with 31 goals and 61 points in 56 games this season, Josh Norris paced Belleville’s offense and was the only rookie in the AHL to average better than a point per game in 2019-20. The 21-year-old native of Oxford, Mich., also made his NHL debut with Ottawa on Feb. 22 and appeared in three games with the parent Senators. Norris was a first-round choice (19th overall) by San Jose in the 2017 NHL Draft, and was acquired by Ottawa in a trade on Sept. 13, 2018.

Boston’s second-round pick in the 2017 NHL Draft, Jack Studnicka led the Atlantic Division champion Providence Bruins in goals (23), assists (26) and points (49) while skating in 60 games in 2019-20. The 21-year-old native of Tecumseh, Ont., also tied an AHL rookie record with seven shorthanded goals, and picked up an assist in his NHL debut with Boston on Nov. 26 at Montreal. Studnicka played four seasons of junior hockey with Oshawa and Niagara (OHL), totaling 233 points in 252 games.