Norris named CCM/AHL Player of the Month for February 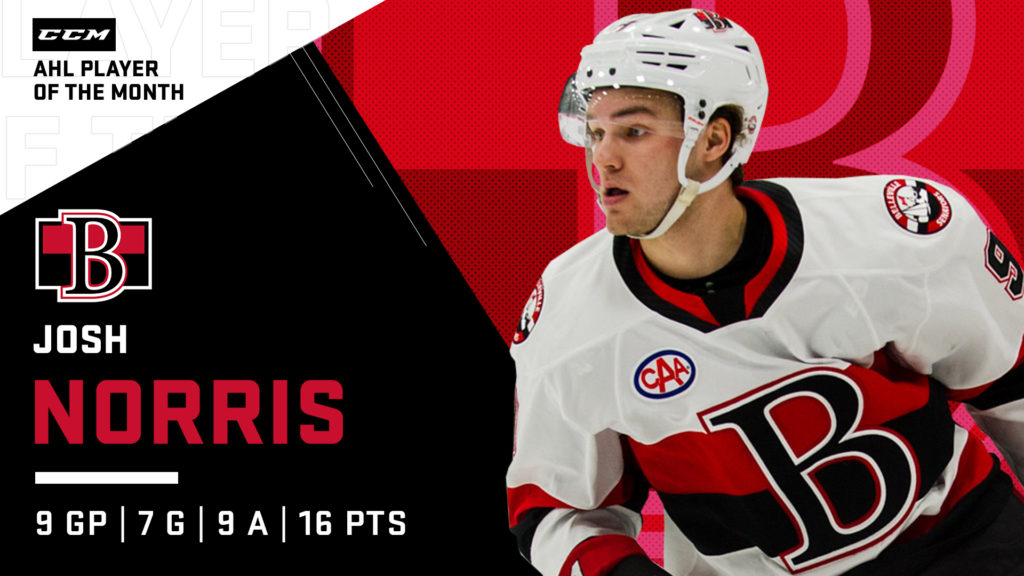 Belleville Senators rookie forward Josh Norris has been named the CCM/AHL Player of the Month for February after collecting 16 points in nine games.

Norris began February by tallying a goal and two assists in the Senators’ 5-4 overtime win at Laval on Feb. 1. He notched a goal and an assist in a 7-4 win over Toronto on Feb. 7, and recorded two more assists in a 3-2 OT victory over Laval on Feb. 8. Following a two-point effort against Toronto on Feb. 15, Norris posted two goals and an assist each in a 5-2 win over Syracuse on Feb. 17 and a 3-2 overtime victory at Rochester on Feb. 19. Norris was recalled by Ottawa and made his debut with the parent Senators on Feb. 22, appearing in the first three NHL contests of his career before the end of the month.

A first-round pick (19th overall) by San Jose in the 2017 NHL Draft, Norris leads all AHL rookies with 30 goals and 58 points in 52 games for Belleville this season. The 20-year-old native of Oxford, Mich., turned pro this year after two seasons at the University of Michigan and represented the United States at the IIHF World Junior Championships in 2018 (bronze) and 2019 (silver).

Norris is the third Senator to win a league award this season after Vitaly Abramov and Filip Gustavsson.