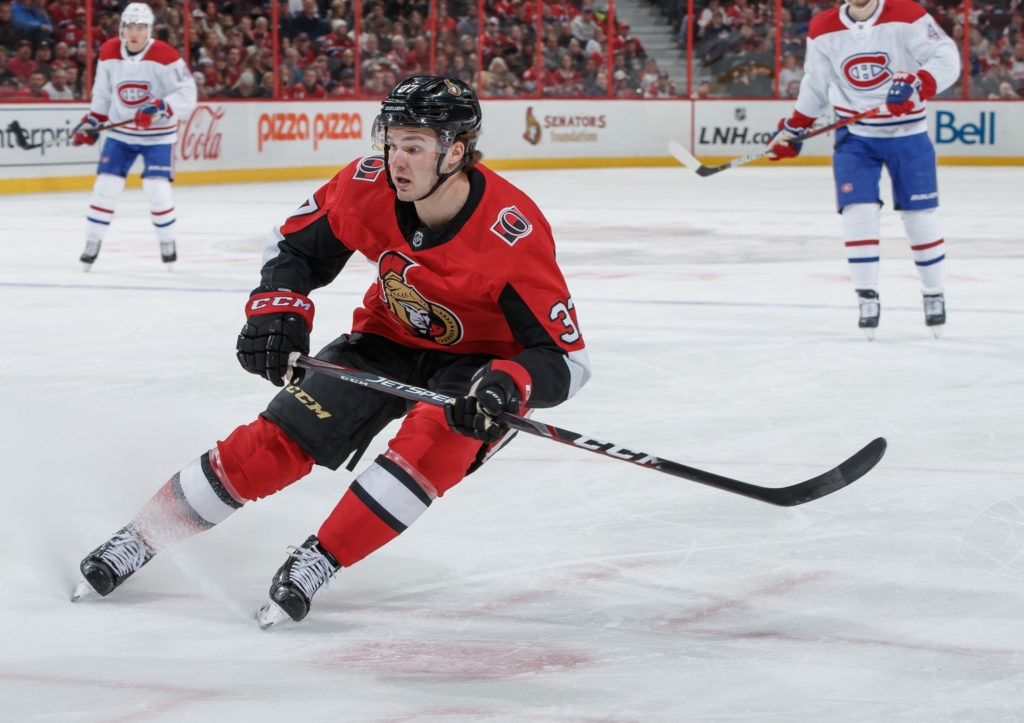 Josh Norris made sure to make a memorable first impression ahead of his recent NHL debut.

Even though it wasn’t necessarily his own idea.

Ahead of his NHL debut against Montreal on Feb. 22, Norris now famously took his rookie warmup lap without his helmet.

“I had heard a couple of rumours they were going to hide it on me,” Norris said. “I was half way dressed and looked at my stall and noticed my helmet wasn’t there. So, I went into the bathroom to fix my hair as best as I could, still wasn’t great, but that was a really cool moment and it was awesome to be part of that.”

He played 15:16 with four shots on a line with current and former Belleville teammates Drake Batherson and Nick Paul during a 3-0 loss. “Those guys were great to me and it’s a memory I’ll have for the rest of my life,” Norris said.

“The speed,” Norris said of the biggest adjustment from the AHL to the NHL. “Guys are smarter. They’re in the right spots at the right times and you have to make decisions a half second quicker. I think it was a great learning experience for me. I thought I learned a lot and important to know I can play at that level. I felt comfortable and made some plays and had some chances.”

Norris has lit up the AHL this season, leading all Senators in scoring with 58 points and 30 goals, both of which lead all AHL rookies too. He was named the CCM/AHL Player of the Month for February Monday after tallying 16 points in just nine games.

After missing the second half of last season with a shoulder injury at Michigan, Norris entered his first professional season with the goal of helping Belleville chase its first playoff berth. But the opportunity to make his NHL debut was something that slowly started to cross his mind as he continued to stuff the stat sheet every night.

“I think you try not to think about it too much and try and be in the moment especially for me seeing as it is my first-year pro,” Norris said. “I just wanted to learn as much as I could knowing where the organization is at in its rebuild.”

But dominating the American League will get the attention of management with Ottawa general manager Pierre Dorion making the call to give Norris a taste of the NHL.

The moment was even more special for the Oxford, MI., native as his family flew in for the occasion. Norris’ dad, Dwayne, played 20 NHL games for Quebec and Anaheim.

“My parents were there and some really close family friends came in as well so that was the most important part to have them there,” Norris said. “I actually spotted my parents in warmup. Drake and I were just stretching and we ended up seeing my parents and my mum got a picture of us pointing at her. That was pretty cool.

With three games under his belt, Norris’ focus returns to Belleville where alongside Batherson, Alex Formenton, Logan Brown and others, he’s hoping to lead the Sens on a deep playoff run. But he’d be lying if he said he didn’t have an eye on a full-time spot in Ottawa come next fall.

“Obviously the focus is on the rest of the season here,” Norris said. “I think we have a great team to do something special in the playoffs.

“But, I’d love to be there come next September.”