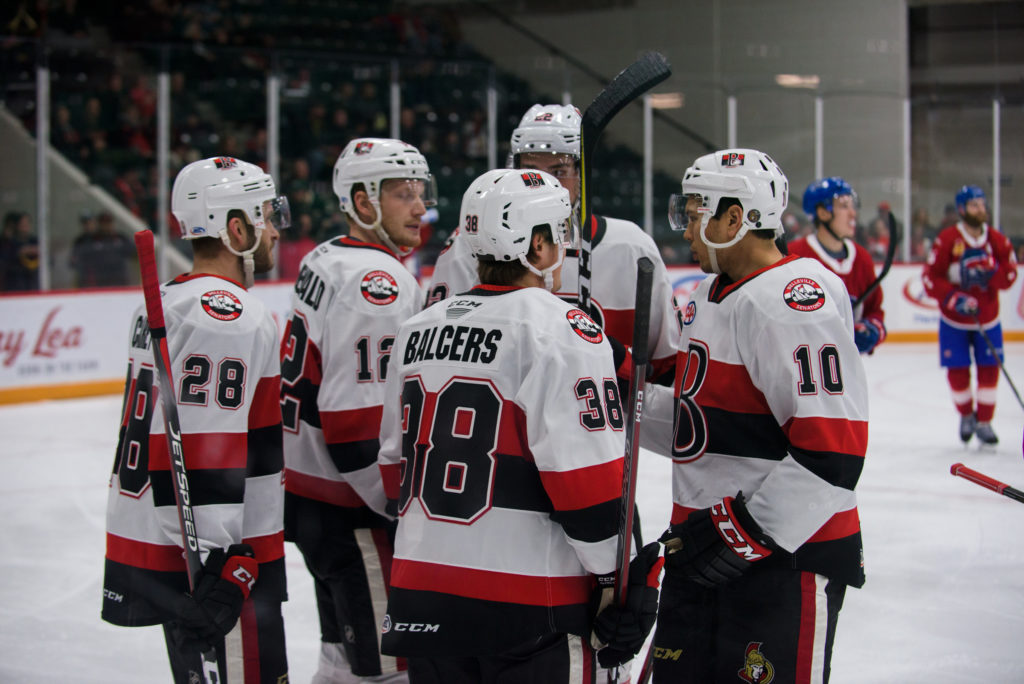 The Rocket opened the game with an aggressive forecheck and found the net first through Evans’ seventh of the year as he was out in front of the net to deflect in Nikita Jevpalovs centering pass from the left goal line at 4:36.

But the lead was short-lived as the Senators tied the game at 1-1 just 31 seconds later on the power play as Balcers kept a shot from the left faceoff circle low to beat Etienne for his eighth of the season.

With just two shots in the opening period, the Senators got to work early in the second in an explosive frame as they scored five times. It took just 1:15 for Elliott to give Belleville the lead with his first goal for the club on his debut as he let a wrister go from the right faceoff dot that beat Marcoux high glove side.

It was 3-1 Belleville 2:03 later through Carey as he wacked the puck out of thin air after a gorgeous cross-ice pass from Jack Rodewald as he notched his fourth goal of the season to chase Marcoux from the game.

Ciampini’s first of the year at 10:55 off of a lovely pass from Boston Leier made it 4-1 before Rodewald made it 5-1 on the power play with a re-direct on a Stuart Percy pass.

Balcers’ second of the night at 17:06 off of a saucer pass from Adam Tambellini completed a dominant period for Belleville.

Marcoux returned in goal for Laval to start the third before Joseph LaBate and Michael McCarron tangled 55 seconds into the frame. Jevpalovs cut the Sens lead to 6-2 with 3:56 left on a one-timer off of an Evans pass from behind the net.

Brown restored Belleville’s five-goal lead as he skated in at the far post to bury Pat Sieloff’s pass for his fourth of the year at 5:02 after a nice feed from the Sens blue-liner to complete a dominant 7-2 victory.

The Sens are back in action Saturday as they host the Providence Bruins for the only time this season. Tickets are available by clicking here.