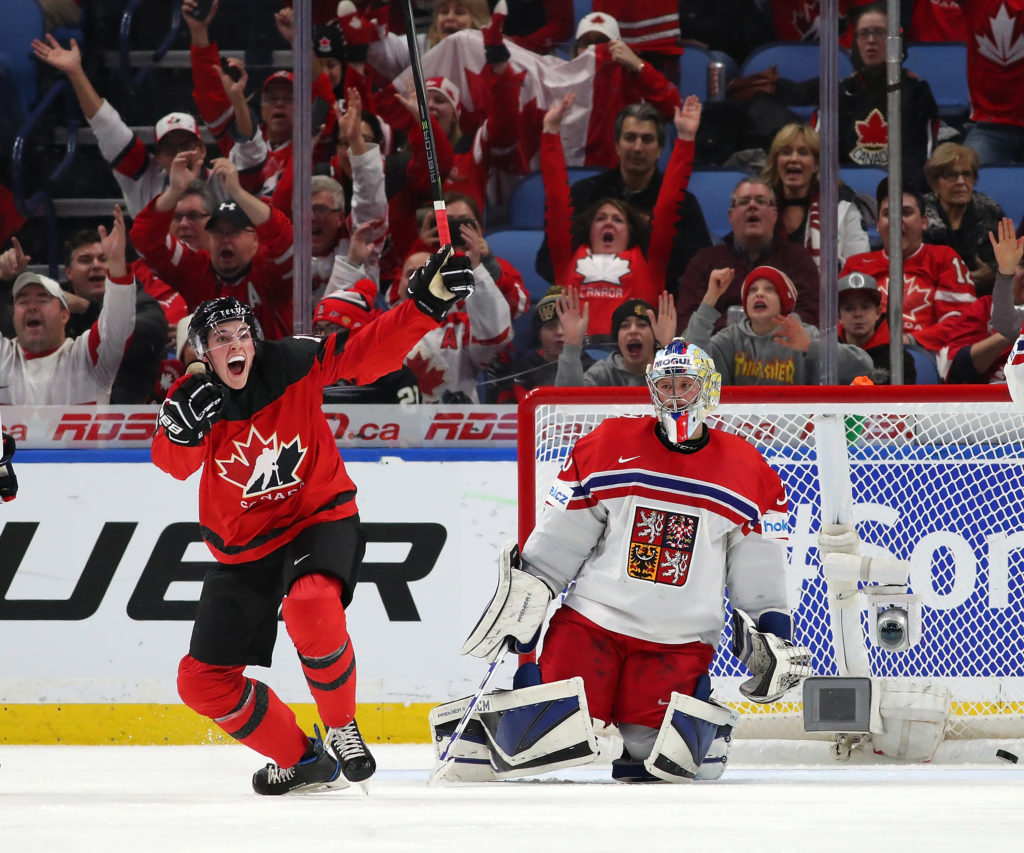 It’s one of the highlights of the Holiday Season: the World Juniors.

With the 2020 edition kicking off this afternoon, including a massive Canada vs. USA battle, we asked each player what it was like playing in arguably the hockey world’s biggest international tournament.

What was your favourite World Juniors moment?

You always are proud to represent your country and it’s a big honour. Everyone is watching back home and you’re playing for your country so that’s the best part about it.

We don’t get that chance too often. I was lucky enough to get to play and it was awesome. We ended up losing every single game but it was a lifetime experience and I enjoyed every second of it.

It was unbelievable. I was a late invite to camp and then was able to make it. It was the best experience of my life.

For us it was a little different because we had played with each other since we were 15 years old so it for us it was amazing to be with that group of guys. Some guys you’ll never see again and we went there with the mindset that it’s our last chance to win something and it was pretty special.

I think the whole tournament was one of my favourite hockey memories so far and that was my first chance to wear that logo on my chest and obviously have the country behind us cheering and rooting us on and then being able to come out of that tournament with the gold medal was something I’ll remember forever.

You get to represent your country and you’re playing against the best players in the world at your age so you know it’s going to be really tough games. Often, it’s always so loud and everyone is watching. The World Juniors are a big tournament back home in Sweden and everyone is going out firing rockets and fireworks and then everyone goes in and watches the World Junior game.

It was a great experience. I had two years at it so I was really lucky. It’s always a really special time to represent your country. It’s one of the most prestigious hockey tournaments in the world so I’m very grateful for that opportunity.

How meaningful was it to you to represent your country?

It’s a huge tournament and you watch it growing up every Christmas and everyone knows about it. You work all your life to make this tournament and then you play there and it’s a dream come true.

Any tournament, I’ve had the opportunity to play the World Juniors and a couple of World Championships too, every time I go I’m having a blast. You get to see all the guys that you don’t get to see during the season and just play some hockey and have fun.

All the support from the fans all across Canada and watching it every Christmas with my family made it cool so to be a part of it and have them all there was amazing.

Every time you can represent your country it is a big honour and it doesn’t matter who it is, every time you put your national jersey on there’s a lot of pride and you have to enjoy every second of it because you don’t know when you will get another chance.

It’s something that I’m very proud of myself for making and it’s really huge in Canada. Everyone watches it around Christmas and to have my family there supporting me and watching me play for Team Canada is something I’ll remember forever. Once a winner, always a winner and I’m sure as our careers go on and guys go their separate ways, we’ll still reach out to each other and meet up.

It’s one of the biggest things you can do. You competed all your young life and they tell you that you’re one of the best at your age and get to represent your country is just an honour.

I was really fortunate to do it in junior for two years with US program and then two more years in a row at the World Juniors. It was really fun and meant a lot to me.