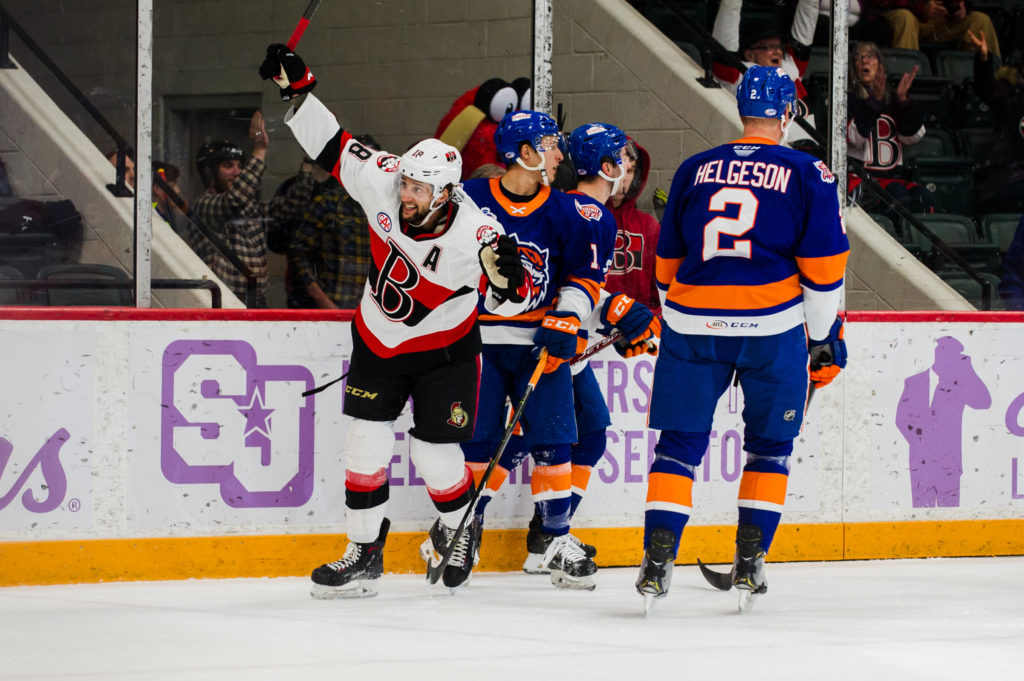 Rudolfs Balcers had the overtime winner as the Belleville Senators beat the Bridgeport Sound Tigers 4-3 at CAA Arena.

In a 2-2 game heading into the third, Bridgeport took a 3-2 lead with 8:22 left as NHL veteran Ladd had a wide open net to score into after a saucer pass by Wahlstrom on the power play left Ladd with his second goal in as many games against Belleville.

Belleville found an equalizer with 3:19 to play as Christian Jaros’ blast into traffic saw the puck squeak out to the right of the net where Balcers was waiting to bury his first of the year in his return to the lineup to send the game to overtime.

Balcers smashed home the overtime winner 1:42 into the extra frame as the Sens pushed its point streak to six games.

After some early Belleville pressure, it was the visitors who struck first as with Vitaly Abramov in the penalty box Wahlstrom fired a one-timer over Hogberg’s glove at 10:37 for his third of the year.

The Sens used a big final two minutes to take a lead into the first intermission that started with Abramov scoring with 1:50 left. The Russian took a nice stretch pass from Jordan Murray to sneak in behind the Bridgeport defence and slip the puck past Gibson for a power play marker.

Belleville had the lead with 36.9 seconds left in the frame as after JC Beaudin’s initial shot was saved, the rebound hit Klimchuk in the chest to roll in for his fourth of the season.

Bridgeport had the lone goal in the second and it came through the rookie Durandeau who scored in-tight on a rebound for his third of the year at 15:38.

Belleville hits the ice again Saturday to host Milwaukee for the first time ever. Tickets are available by clicking here as the Sens will show its support for Hockey Fights Cancer.