Sens beaten in overtime by Toronto 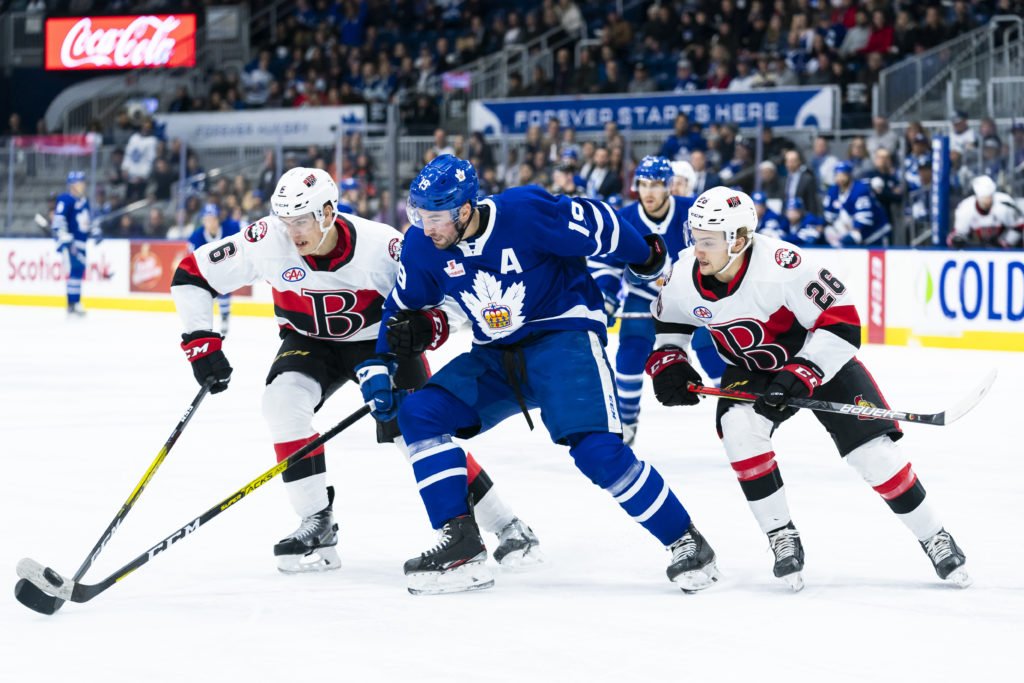 The Belleville Senators fell 7-6 in overtime to the Toronto Marlies Saturday afternoon.

Tied at 6-6 heading into the extra frame, it was Toronto completing a wild comeback 1:01 in as Korshkov deked Gustavsson and slid the puck home to end the game.

The Senators erupted in the first period scoring four goals in a 6:05 span. Captain Szwarz got it going at 7:39 as he was on hand to bury a rebound after Alex Formenton had hit the post. Norris made it 2-0 with a snipe from the right faceoff circle that went bar down at 10:27 before Aspirot’s second of the season came 1:59 later as he had his stick on the ice to deflect Erik Brannstrom’s slap pass home.

Abramov completed the hot start at 13:44 as he outmuscled two Marlie defenders to secure a loose puck before sliding the puck under Woll for his 17th goal of the season.

Toronto got on the board with 4:43 to play in the period as Pooley scored his seventh of the season to cut Belleville’s lead to 4-1.

After Rudolfs Balcers was robbed by Woll’s right pad, and Gustavsson denied Pooley on a breakaway, Belleville got its four-goal lead back through LaBate’s seventh of the season as he was on the doorstep to knock in a rebound for a 5-1 advantage. Marchment made it 5-2 at 9:55 of the frame on the power play before Hollowell cut into the Belleville lead even more with 1:40 left in the second.

Hollowell’s second of the game came 1:51 into the third as he used a Darren Archibald screen on Gustavsson to make it a one-goal game but Szwarz grabbed his second of the night on another rebound after Formenton had been denied at 7:05 to make it 6-4.

Read cut the lead to a goal again with 2:34 left in regulation as he found a loose puck in a scramble out front and went high for his ninth of the year and Toronto tied the game with 16.6 seconds left through Brooks on a one-timer with the goaltender pulled.

Belleville returns to the ice Monday afternoon when they host Syracuse on Family Day at 2pm. Tickets are still available by clicking here.