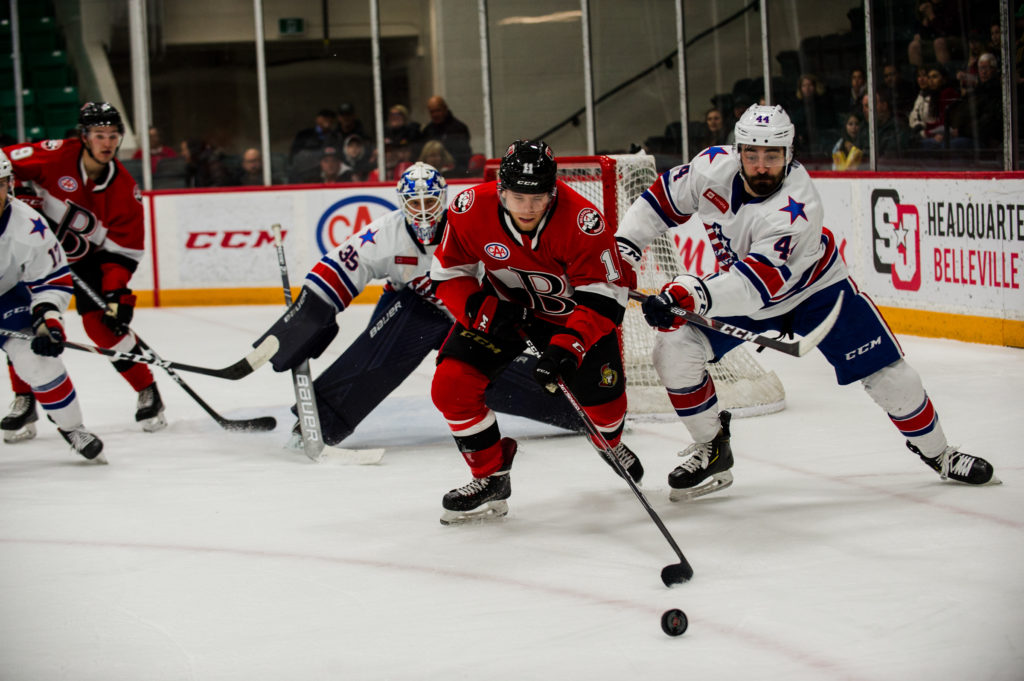 The Belleville Senators dropped the opening game of a back-to-back to the Rochester Americans 5-3 Friday night at CAA Arena.

After a relentless opening from Rochester, they finally converted on their 11th shot of the night at 10:43 as Porter took a rebound off the back boards and tucked it behind Dubeau who was trying to get back into position. Dubeau wound up making 22 saves in the first period, the most ever by a Sens goalie in a period.

It took all of 32 seconds of the second period for the Sens to make it a 1-1 game as on the power play, Formenton buried Jordan Szwarz’s pass from the side of the goal to deposit his 27th of the season.

Chlapik gave Belleville the lead at 9:02 as he scored for the fourth straight game as he skated into the offensive zone before letting a wrister go from just above the left faceoff circle to make it 2-1.

Bryson made it 2-2 with 5:32 left in the frame short-handed as after Drake Batherson’s stick broke, the Amerks skated in on a 2-on-1 and Bryson coverted Sean Malone’s pass for his third of the season. Smith gave Rochester the lead at 18:00 of the frame as he jumped out of the box and skated in on a breakaway to beat Dubeau with a backhander after the puck jumped over the stick of Jordan Murray at the offensive blue line.

Belleville tied the game with 5:32 on Chlapik’s second of the night after a nice give-and-go down the right wing but Oglevie restored the Rochester lead 2:31 later as he avoided Dubeau’s poke check to slide the puck in for a 4-3 advantage.

Wilson scored an empty-net goal with 1:27 to play.

Belleville is back in action tomorrow night when they again host Rochester. Tickets are available by clicking here.