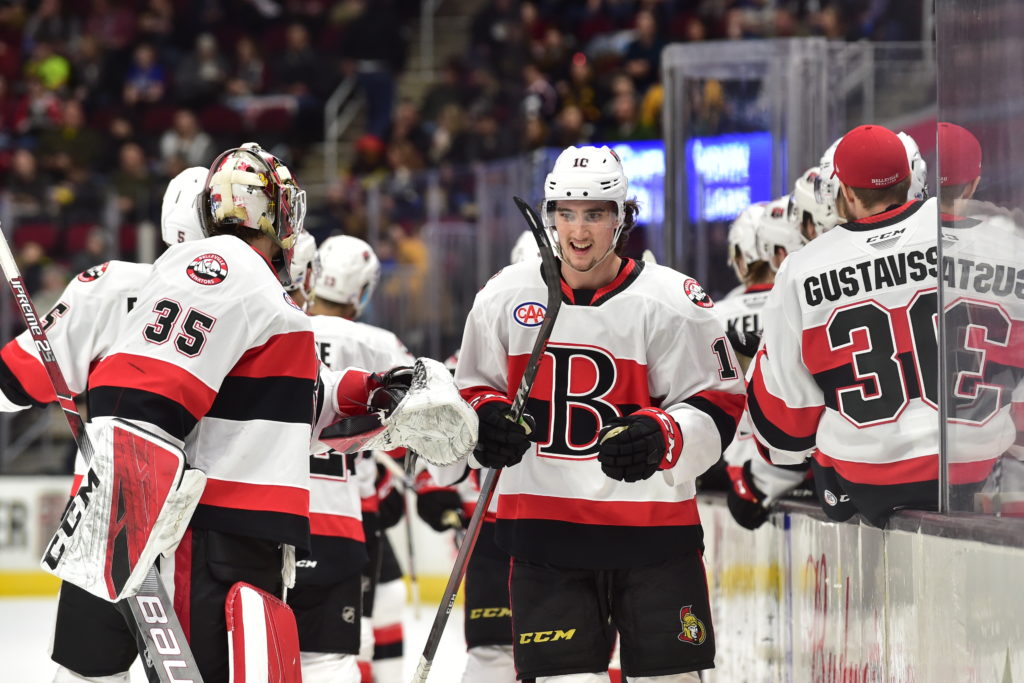 The Belleville Senators won its first ever game in Cleveland on the back of a 5-1 victory over the Monsters Friday night.

Joey Daccord made 22 saves in the Belleville goal as Alex Formenton, Drake Batherson, Christian Wolanin, Jordan Szwarz and Filip Chlapik scored. Brad Thiessen turned away 20 shots for the Monsters as Kole Sherwood had their lone goal.

Michael Carcone hit the post midway through the first but the Senators finally broke the deadlock with 17.9 seconds left in the first through Formenton on the power play as he picked his spot out front after collecting a loose puck after a Thiessen poke check on a centering feed by Carcone.

The lead was 2-0 1:28 into the second as Batherson scored from a tight angle off of Vitaly Abramov’s pass from behind the net as he scored his 15th of the season. It was 3-0 at 5:41 on Wolanin’s first of the season on a 5-on-3 advantage as his low wrister hit a Cleveland stick and went high on Thiessen before Szwarz made it 4-0 1:11 later by burying a back door pass on the man advantage.

Cleveland got on the board on their own power play as Calvin Thurkauf’s point shot on the power play hit Sherwood in the skate to beat Daccord at 17:07 to make it 4-1.

Chlapik’s sixth of the year came at 3:51 to make it 5-1 as he buried Batherson’s centering feed on a 3-on-1 rush on the only goal of the third period.

Carcone and Adam Clendening dropped the mitts at 11:42 of the second and both received game misconducts for fighting off of a faceoff. The win snapped a previous 0-4 record in Cleveland for the Senators. Belleville d-man Frank Corrado played in his 250th career AHL game.

Belleville and Cleveland will meet again tomorrow before the Sens return home March 4 against Toronto. Tickets are available by clicking here.