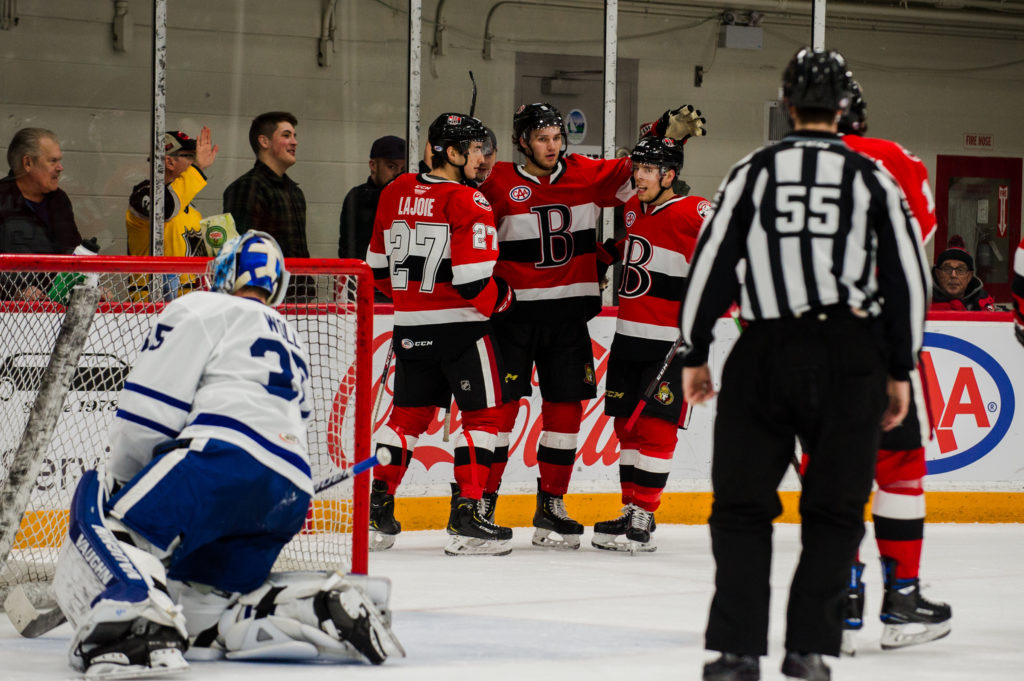 The Belleville Senators tied a franchise record for goals in a game as they beat the Toronto Marlies 8-4 at CAA Arena Wednesday night.

Baptiste put Belleville ahead at 6:58 of the opening frame on his first goal as a Senator as he had his stick on the ice to put in Klimchuk’s pass to score against his old team.

Chlapik doubled the Belleville lead at 8:51 as he buried a rebound high for his eighth of the year but Toronto got on the board with 55.8 seconds left short-handed as Salomaki drove the net where Dubeau made the save but the rebound hit the Marlies forward and trickled over the goal line, where a review had to confirm the goal.

Scott Pooley tied the game at 5:07 of the second as he beat Dubeau low from the right circle just moments after Woll robbed Szwarz with an incredible stick save.

Lajoie restored Belleville’s lead at 8:57 as from the left corner he tried to send the puck out front for it to hit Marlies d-man Michael Kapla and go in as the Senators defenceman notched his third of the season for a 3-2 lead.

Captain Szwarz made it 4-2 with 6:38 left in the period as he took Carcone’s pass inside the zone before firing low on Woll for his 18th of the campaign before Norris’ 31st 1:22 later extended the lead to three.

Toronto cut it back to a two-goal deficit with 2:34 left in the second through Read who scored from one knee and got to within a goal 3:06 into the third on Korshkov’s 16th.

Carcone made it a 6-4 Belleville lead at 5:54 of the final frame as his 13th beat Woll low from in-close before Norris and Mac Hollowell dropped the mitts after some shoving out front that saw the Sens rookie drop the Toronto defenceman.

Archibald pushed the lead to three goals again at 14:30 as after Jonathan Aspirot drove the net and had the puck poked away at the last second, the veteran forward was on hand to bury his fourth with the Sens.

Klimchuk completed the rout with 1:26 to play as he hammered home a one-timer off of Parker Kelly’s set-up for his 12th of the year.

Belleville is back in action Friday when they host Rochester in a battle of the top two teams in the North Division. Tickets are available by clicking here.