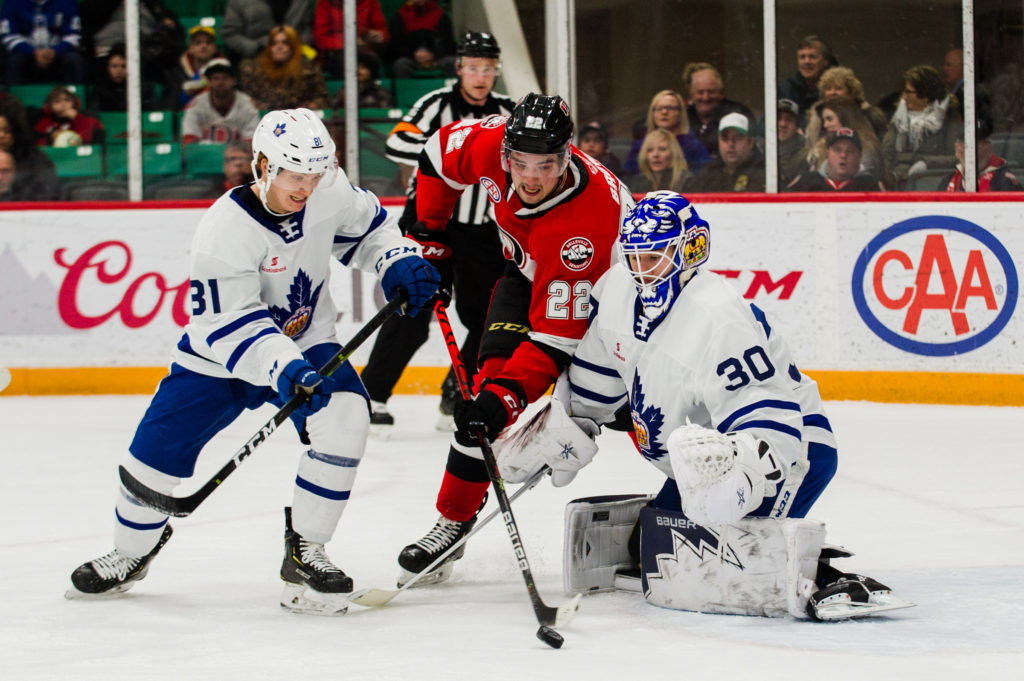 The Toronto Marlies claimed a 4-2 win over the Belleville Senators Friday night at CAA Arena.

Toronto thought they had opened the scoring through Matt Read on the power play but Andreas Englund somehow kept the puck out of the net with his body as the Marlies forward had a wide open cage to bury the puck.

The Sens would jump out to a 1-0 lead at 8:46 through Dougherty’s fourth goal of the season on a quick snap shot from the edge of the left circle after Vitaly Abramov found the Sens d-man jumping into the play. Toronto tied the game with 47.7 seconds left in the frame as Marchment buried Agostino’s pass from behind the net.

It took just 2:29 into the second for the Sens to regain the lead as Jordan Murray found Abramov with a fantastic stretch pass before the Russian forward snapped a 13-game goalless streak by beating Kaskisuo five-hole on a breakaway. Agostino made it 2-2 at 9:22 on the power play as he knocked in a loose puck out front after Daccord made the initial save.

Toronto took its first lead of the game with 1:43 left in the second through Korshkov who slid the puck under Daccord’s pad on a partial break during 4-on-4 action.

It was 4-2 Toronto with 11:14 to play as Scott Wilson’s shot hit the backboards and bounced to the right side of the net where Read was able to deposit his eighth of the season.

The Sens couldn’t crack Kaskisuo in the third period, a frame that ended with the returning Christian Wolanin dropping the gloves with Adam Brooks in his first game back from shoulder surgery.

The Senators return to action tomorrow afternoon when they visit Toronto. The Sens are home again Monday when they host Syracuse on Family Day. Tickets are available by clicking here.