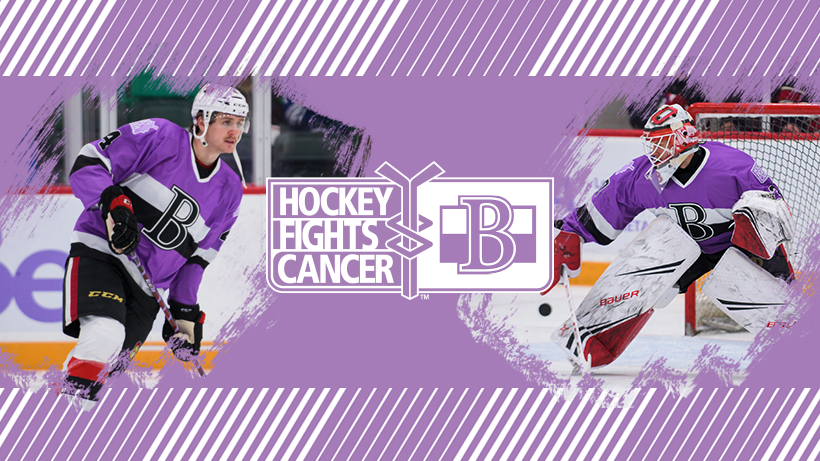 The Belleville Senators will join the NHL and AHL in their Hockey Fights Cancer initiatives throughout the month of November.

During the Senators’ game on Nov. 16 against Milwaukee at CAA Arena, Belleville will wear lavender coloured jerseys for both games.

For the second straight year, proceeds from the two games will be donated to the Canadian Cancer Society and the ‘Wheels of Hope’ program, which provides those affected by cancer with a means of transportation. Since the mid 1950’s the Canadian Cancer Society has provided volunteer driver transportation assistance for people with cancer. Volunteer drivers provide return trips for patients from their home to treatment centres.

Throughout the month of November there will be multiple fundraising initiatives with all proceeds benefitting the ‘Wheels of Hope.’ Furthermore, the lavender game-worn jerseys will be made available through a silent auction, raffle and online auction.

Furthermore, the rink boards inside CAA Arena have been converted to lavender as has all Senators’ digital and social media properties for the entire month of November.

Founded in 1998 by the National Hockey League® and the National Hockey League Players’ Association, Hockey Fights Cancer™ (HFC) unites the hockey community in support of cancer patients and their families. The initiative gets an assist from players, coaches, officials, equipment managers, front office staff, corporate partners, and fans. Together, the hockey family looks to inspire hope and courage for those who are living with, going through and moving past cancer.

The Senators will also be handing out ‘I Fight For’ signs that fans can use throughout the weekend to show support for their loved ones who have been impacted by cancer.

During the games on Nov. 15-16, the Sens will hold a ‘Moment of Fight’ where fans are encouraged to show their support to family and friends who have been impacted by cancer.

To join the conversation, fans are encouraged to use the hashtag #HockeyFightsCancer on social media.

Tickets for the Senators Hockey Fights Cancer weekend are available by clicking here or by visiting the Sens’ Box Office.