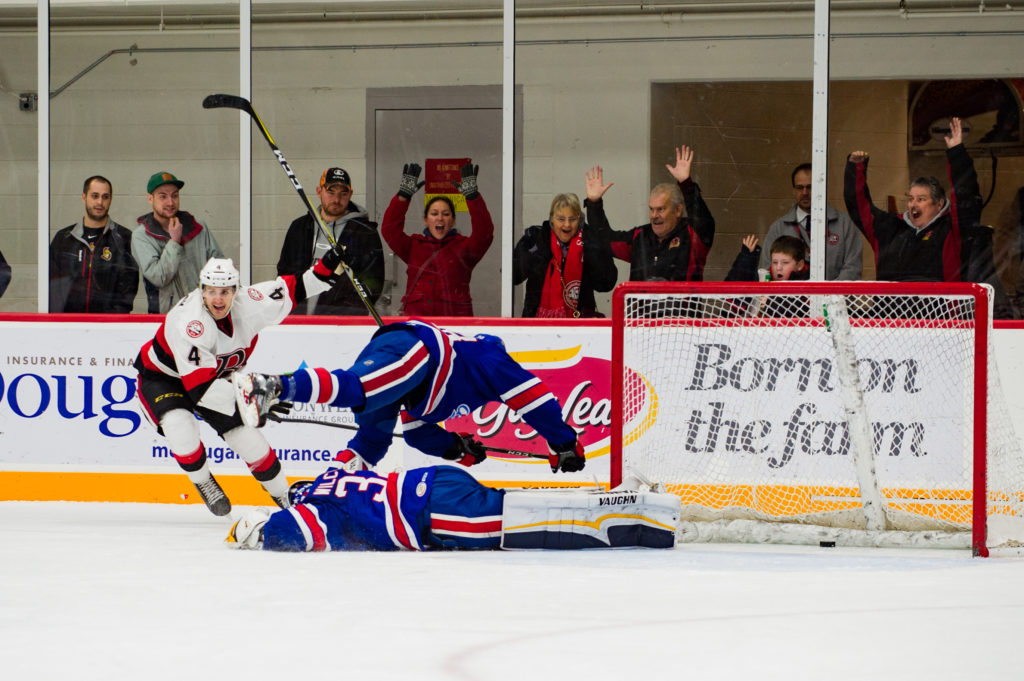 The Belleville Senators return home this Friday evening for Opening Night presented by CAA Insurance as the Sens host the Binghamton Devils.

It marks the third home opener in franchise history since the Senators came to Belleville and the second straight year that they’ve hosted the Devils for game No. 1 at CAA Arena.

As a side note, the Sens are unbeaten in home openers having beaten Syracuse in the franchise’s first ever home game and then beating Binghamton last year.

With that in mind, we’re taking a look back at the Top 5 games ever played at CAA Arena in Belleville history, in no particular order.

Arguably still the most memorable game played at CAA Arena (or Yardmen Arena as it was known at the time), the Sens came home from a nine-game road trip to open the season to a rapturous home crowd.

An emotional pre-game ceremony was followed by one of the most entertaining match-ups in Sens history as Belleville prevailed in a shootout 5-4 thanks to Gabriel Gagne’s winner.

In what is still single-handedly the most memorable save in franchise history, Filip Gustavsson stole the sports world headlines on Dec. 1 with an incredible stick save on Lehigh Valley forward Greg Carey.

With the ENTIRE net to aim at, Carey fired goalward for Gustavsson, who was past the left goalpost, to dive across the crease to get a stick on Carey’s shot to somehow keep the puck out of the net.

On Remembrance Day, Jordan Murray made Senators history by becoming the first player to score a hat-trick.

With Belleville down 3-1, Murray buried his first of the night midway through the second before his third period goal against cut the deficit to a goal as he made it 4-3. After the game was tied by Francis Perron, Murray would give Belleville the two points with an overtime goal with a tip out front and forever cementing himself in Senators history.

The Battle of Ontario has taken place 25 times already but you could argue none of them were as exciting as when the two teams met at CAA Arena on Nov. 9.

In a 7-6 Belleville win, Batherson stole all the headlines with a six-point night (five assists) to set franchise records in both categories and earning himself his first NHL recall in the aftermath as he joined Ottawa the following day before scoring his first NHL goal in his debut later that week.

Poor Christian Wolanin is often forgotten in this game as he would have set the Sens single-game point total as at five points if not for Batherson grabbing an extra assist.

The Belleville Senators set a franchise record for goals in a game when they thumped the Rocket 8-2 towards the end of the Sens’ inaugural season.

Ville Pokka had a hat-trick for Belleville while Christian Jaros and Colin White were also amongst the Sens’ scorers.

The eight goals by Belleville still remains the only time the team has buried eight in a game.