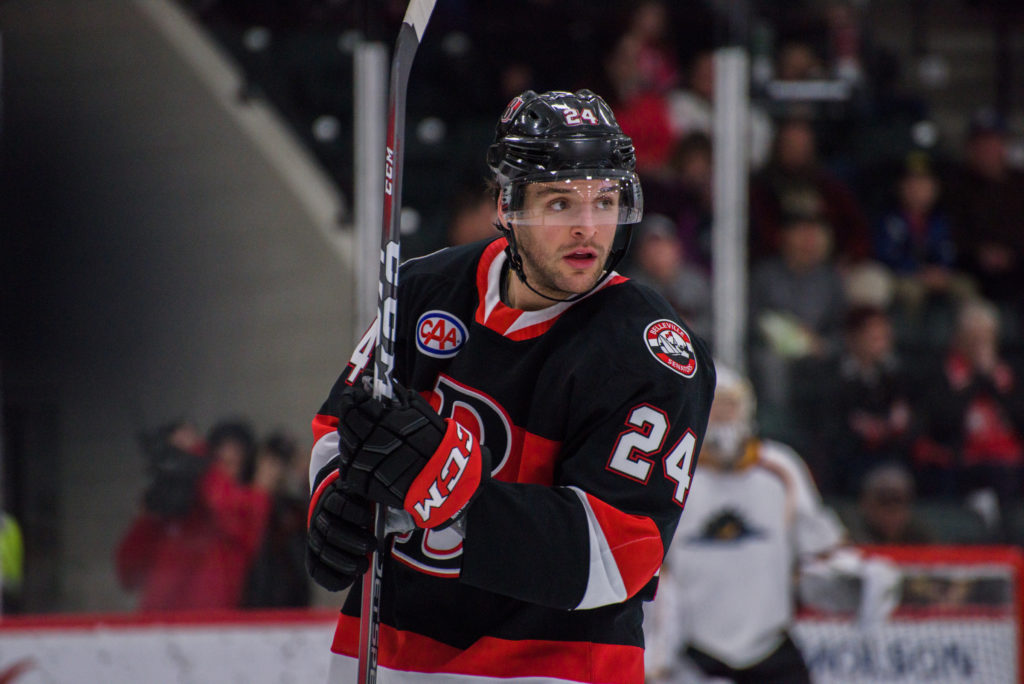 Christian Wolanin is officially back.

The dynamic blueliner was assigned to Belleville Monday after recovering from a shoulder injury suffered at the start of training camp in Ottawa last September.

“Yesterday, from the moment I got into town, it all sank in,” Wolanin said. “I knew it was coming but it didn’t feel real until I got here. Walking in this morning and seeing Manner, all the new staff and the boys was refreshing.

“It’s been a long year but it feels like everything is back to normal now.”

Wolanin suffered a torn labrum in a freak accident that saw him slip on the ice during an informal skate in early September. All-in-all, it took about five months to heal from the injury.

So, how was the recovery process?

Wolanin will make his season debut Friday night when the Sens host the Marlies. However, he won’t play the following day in Toronto as he’ll avoid playing back-to-back games to start due to the type of injury he had. Sens head coach Troy Mann estimates he’ll play between 17-20 minutes Friday. Wolanin is expected to play next Monday, Wednesday and Friday but likely won’t play Feb. 22 against Manitoba.

“I don’t think you can ease a player back in in terms of minutes played,” Mann said. “We’ll manage his games more than his ice time.”

The 23-year-old played 40 games with Belleville last season where he notched 31 points, the most by a Sens defenceman in a single season in team history. He also suited up 30 times with Ottawa scoring four goals and 12 points.

In Belleville, he’ll bring that offensive prowess to a deep blue line that also features puck movers like Erik Brannstrom and Jordan Murray.

“I think his style of play suits what we’re trying to do here because of his puck moving ability and his skillset,” Mann said. “From an offensive perspective, last year’s stats speak for themselves. It’s going to be a work in progress as he hasn’t played a game this year but when you add the calibre of player he is, he makes us a better team.”

Wolanin returns to a Sens lineup that sits with the best record in the Eastern Conference and holds an eight-point lead over second place in the North Division. The Sens have scored an AHL leading 187 goals but only 17 have come from defenceman.

“I know my shoulder’s healed and I know I’m healthy so it’s a matter of playing hard, playing the right way,” Wolanin said. “Since I found out I was coming to Belleville, I just want to fit in with this group that’s already winning.

“It’s a group that humming in the right direction and my job is to add to that in any way possible.”