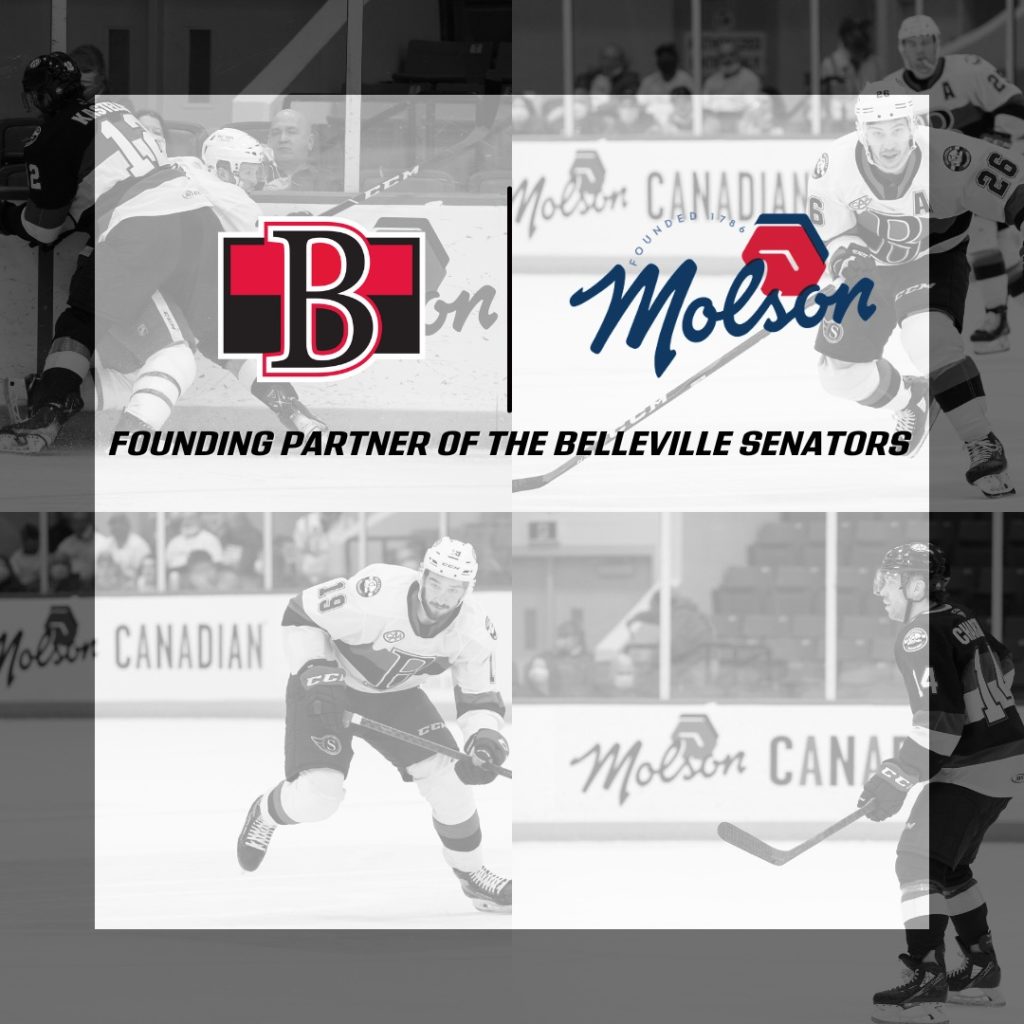 The Belleville Senators and Molson Coors Beverage Company are excited to announce a new five-year partnership extension, that will see Molson Coors beverages continue to be served to Sens fans at CAA Arena and at their favourite game-night spots around the Bay of Quinte Region.

The new deal builds on a partnership which began with Molson Coors being named an inaugural sponsor of the Belleville Sens in 2017-18 and will allow fans to find some of the company’s traditional favourites, as well as its newest products, at CAA Arena, including beer, seltzer, and other alcoholic and non-alcoholic options.

“Molson was our very first founding partner and it is an absolute privilege to expand our relationship even further over the next five years,” said Belleville Sens Vice President Breanne Matthews. “It truly speaks to our mutual commitment to the Bay of Quinte Region and our enhanced customer experience goals.”

“Having been a proud inaugural sponsor of the Belleville Senators, we’re thrilled to return to the team with another multiyear partnership,” says Steve Zmudczynski, National Vice President of Partnerships for Molson Coors Beverage Company. “As the official beer sponsor of the CAA Arena and Belleville Senators, we’re committed to collaborating and continuing to raise the bar on the fan experience.”

Molson Coors and the Belleville Sens will also work with local establishments to bring an enhanced hockey experience to fans in the Bay of Quinte Region, with more details regarding that to be revealed in the near future.

Fans interested in renewing, or purchasing Belleville Senators season ticket memberships, can get more information on those packages by clicking here.

For more than two centuries, Molson Coors has been brewing beverages that unite people to celebrate all life’s moments. From Coors Light, Miller Lite, Molson Canadian, Carling, and Staropramen to Coors Banquet, Blue Moon Belgian White, Blue Moon LightSky, Vizzy Hard Seltzer, Leinenkugel’s Summer Shandy, Creemore Springs, Hop Valley and more, Molson Coors produces many beloved and iconic beer brands. While the company’s history is rooted in beer, Molson Coors offers a modern portfolio that expands beyond the beer aisle as well. Our Environmental, Social and Governance strategy is focused on People and Planet with a strong commitment to raising industry standards and leaving a positive imprint on our employees, consumers, communities, and the environment. Learn more about Molson Coors Beverage Company, visit molsoncoors.com, MolsonCoorsOurImprint.com or on Twitter through @MolsonCoors.

More about the Belleville Senators:

The Belleville Senators are the American Hockey League affiliate of the National Hockey League’s Ottawa Senators and since moving to the Bay of Quinte Region in 2017, have graduated more than 35 players to the NHL. Along with developing the next wave of NHL stars, the Belleville Sens are committed to continuing to forge strong partnerships and provide a top-tier experience for hockey fans across the Bay of Quinte Region.