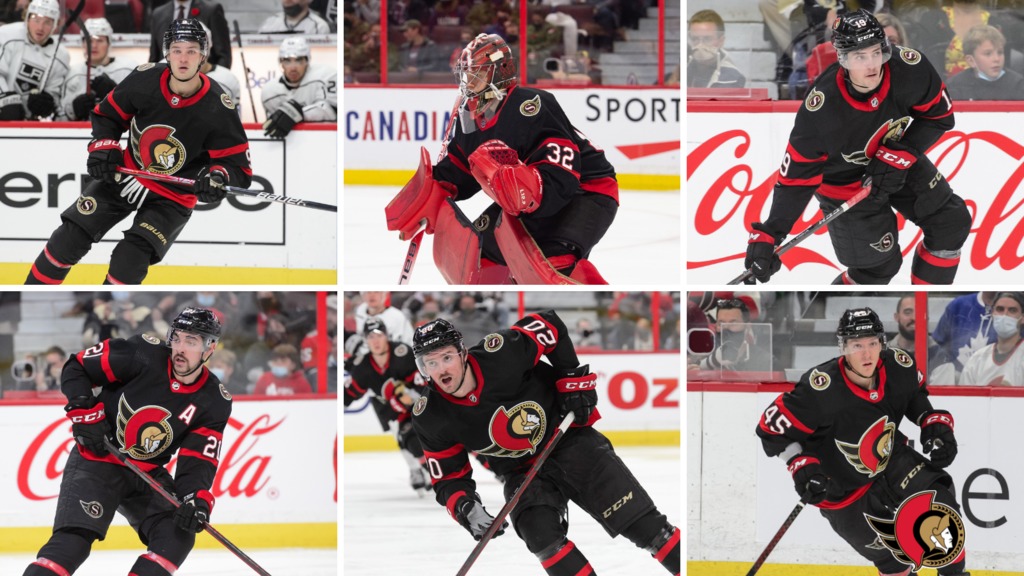 Since the franchise’s inauguration in 2017, the Belleville Senators have seen 50 graduates appear with the Ottawa Senators in the National Hockey League and some recent grads are already making significant impacts this season. We take a look at some of those recent performances in the first of our monthly Senators Alumni Report.

With a fair amount of depth in the crease throughout the organization, Filip Gustavsson is making his case to be one of the go-to-goalies of the future in Ottawa. The Skelleftea, Sweden native, leads the NHL Senators in wins, GAA, and save percentage this season.  Gustavsson’s 76 appearances for Belleville are the most in team history for a netminder.

Splitting time between Belleville and Ottawa early in the season, Parker Kelly has two points in nine games in the NHL. At the AHL level, the Camrose, Alberta native played his 100th career game for the Belleville Sens on November 5th. His five career short-handed goals lead the franchise. Despite bouncing back-and-forth between the AHL and NHL, Kelly hasn’t let that affect his attitude, continuing to bring a positive mindset and unmatched work ethic to the rink each and every day.

Josh Norris continues to be an offensive leader for Ottawa in his two seasons in the NHL. He currently sits second in team scoring (10) and goals (six). Named the AHL’s most outstanding rookie after a stellar 2019-20 campaign, the University of Michigan alumni recorded 61 points in 56 games in the Friendly City and is still working his way towards becoming one of the top players in the National Hockey League.

After earning a full-time role in the nation’s capital in 2020-21, Nick Paul was named an alternate captain, joining Ottawa’s leadership core this season. The Mississauga native ranks sixth all-time in the Belleville Senators franchise, scoring 70 points, skating in 100 games over three seasons in the Friendly City. While he he’s only notched three goals so far, the other aspects of Paul’s game including his grit, work ethic and attitude show he is more than deserving to be one of the leaders on DJ Smith’s club in Ottawa.

Making the Ottawa Senators out of training camp this season, Logan Shaw has played in all but one game. Signing with the organization during the 2020 offseason, he played the pandemic shortened season with Belleville as team captain. While there’s no doubt the Belleville Sens miss his leadership and presence around the dressing room, Shaw has more than earned the opportunity to show what he’s capable of at the NHL level.