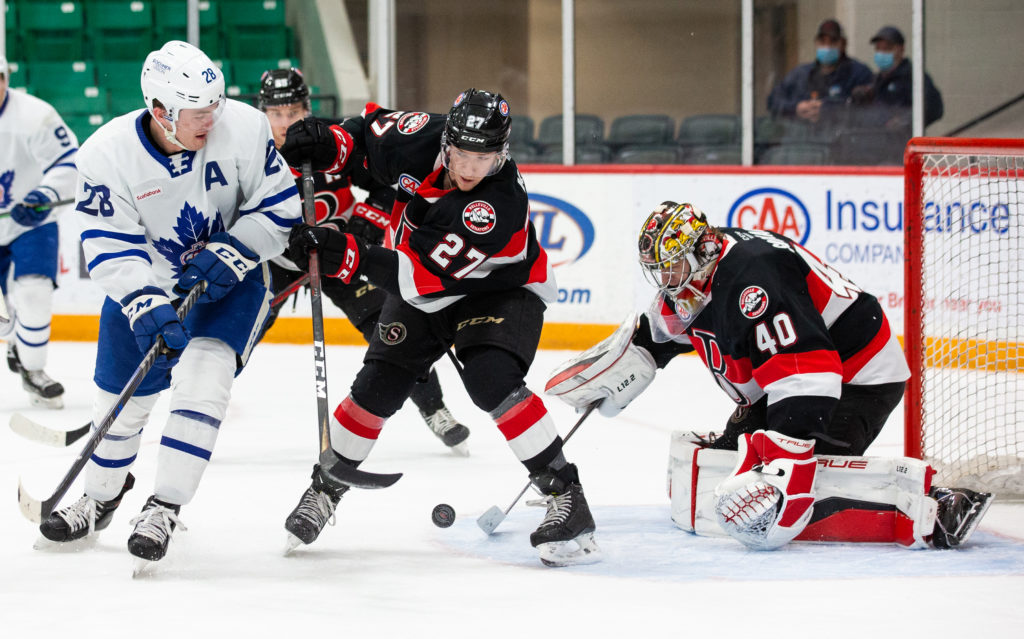 After a ten-day break, the Belleville Senators returned to action Friday night at CAA Arena with a 5-1 loss to the Toronto Marlies.

Toronto opened the scoring at 15:34 of the opening frame as Joseph Blandisi picked up a neutral zone turnover and slid it past Mads Sogaard. The Marlies’ forward found the back for the second time, scoring on a tic-tac-toe passing play three minutes later.

Just over a minute into the second period, the Marlies extended their lead to 3-0 when Mikhail Abramov and Bobby McMann connected on a cross-crease pass for the lone tally of the stanza.

The Marlies continued their offensive output through Antti Suomela, who capitalized on a rebound in the third period at 9:10. Belleville scored their lone goal Matt Wedman converted a goalmouth scramble to end the shutout bid with 4:54 to play. Ryan Chyzowksi made it 5-1 with an empty-net goal at 18:56, clinching the Marlies’ road victory.

“I liked our start. I thought we came out, had our legs. For the first 15 minutes of the period, we dictated the pace, we had one turnover, and they got the goal, and to me, the rest of the game was theirs.”

The Belleville Senators continue their homestand Wednesday evening, hosting the Syracuse Crunch. You can hear the game on the Senators’ Official Broadcast Partner 800 AM CJBQ or see it on AHL TV. Coverage begins at 6:50 p.m with Jack Miller and David Foot.