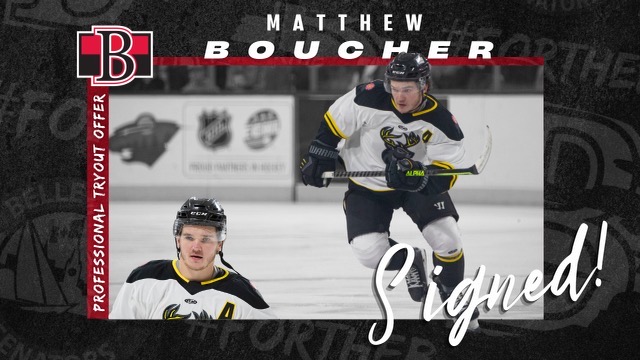 The Belleville Senators have signed forward Matthew Boucher to a professional tryout offer.

This is the second PTO that the 24-year-old has signed with Belleville this season, after playing three games for the Senators between October 26 and October 29, in Laval, Milwaukee and Rockford. Boucher has also played in seven ECHL games this season with the Iowa Heartlanders, notching nine points (five goals, four assists).

Boucher dressed in 21 ECHL games for the Utah Grizzlies last season, where he collected 23 points (13 goals, 10 assists) and a plus-6 rating. He also appeared five times in the AHL with the Colorado Eagles in 2021-22.

Prior to turning pro, Boucher appeared collegiately at the University of New Brunswick, where he won a USports University Cup Championship during the 2018-19 season, following four seasons in the Quebec Major Junior Hockey League with the Blainville-Boisbriand Armada, Drummondville Voltigeurs, and Quebec Remparts, amassing 192 points (96 goals, 96 assists) in 241 games. Other career highlights for the Los Angeles, CA native include winning the John A Daley Trophy as ECHL Rookie of the Year in 2020-21. His father, Philippe, is a former Stanley Cup Champion.

Boucher will join the Senators for their trip to Utica, where they’ll face the Comets for the first time this season, on Wednesday, November 23, 2022. The game can be seen on AHL TV or heard on the Belleville Sens Entertainment Network.