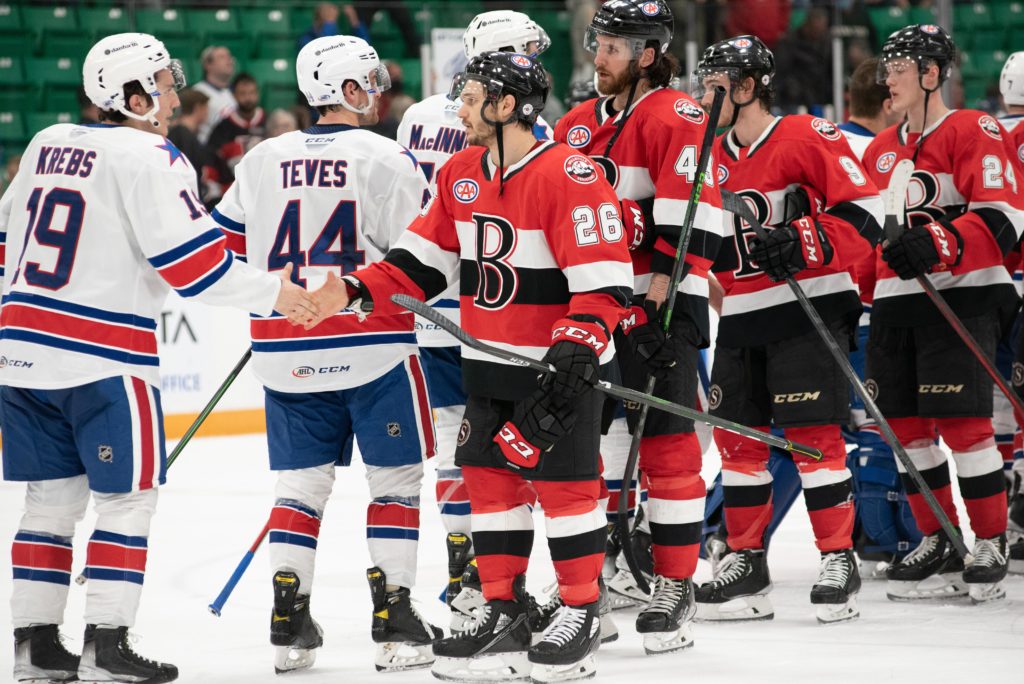 The Belleville Senators were unable to stave off elimination on Friday night, falling 4-3 in overtime to the Rochester Americans at CAA Arena as the Amerks swept the best-of-three series to advance to the North Division Semifinals against the Utica Comets.

After twenty minutes of play, Rochester took an early 1-0 lead through Arttu Ruotsalainen, who opened the scoring at 6:47 on the power play.

The Amerks extended their advantage 5:41 into the second period when Mark Jankowski capitalized on a friendly bounce. Later in the frame, the two sides would trade tallies as Belleville got on the board after Zac Leslie pounced on a rebound in the crease to bring the Senators to within a goal at 13:26. However, Rochester answered right back as Ruotsalainen netted his second of the contest to make it 3-1.

In the third, Belleville began to mount their comeback. Andrew Agozzino cut the lead to 3-2, firing home his first of the postseason off a Mark Kastelic faceoff win. Before rookie forward, Roby Jarventie tied the contest at 7:19 with a one-time blast on the man advantage to ultimately force extra time.

Brett Murray secured the victory with 2:22 left in overtime, scoring the game-winner with a snapshot from the low slot.

“Both games were tight and went to overtime. As we know, the division is so close this year, and to me, there wasn’t a lot of a big difference at all between the top 6 teams. It went right down to the wire, and we could’ve easily won both of those games as well. They got the break in overtime on both nights, but I loved our resilience and our pushback, obviously trailing tonight 2-0 and 3-1. It was a fun crowd tonight, energized, and, unfortunately, we couldn’t pull it out to get it to Sunday because we would’ve had a lot, much better evening.”