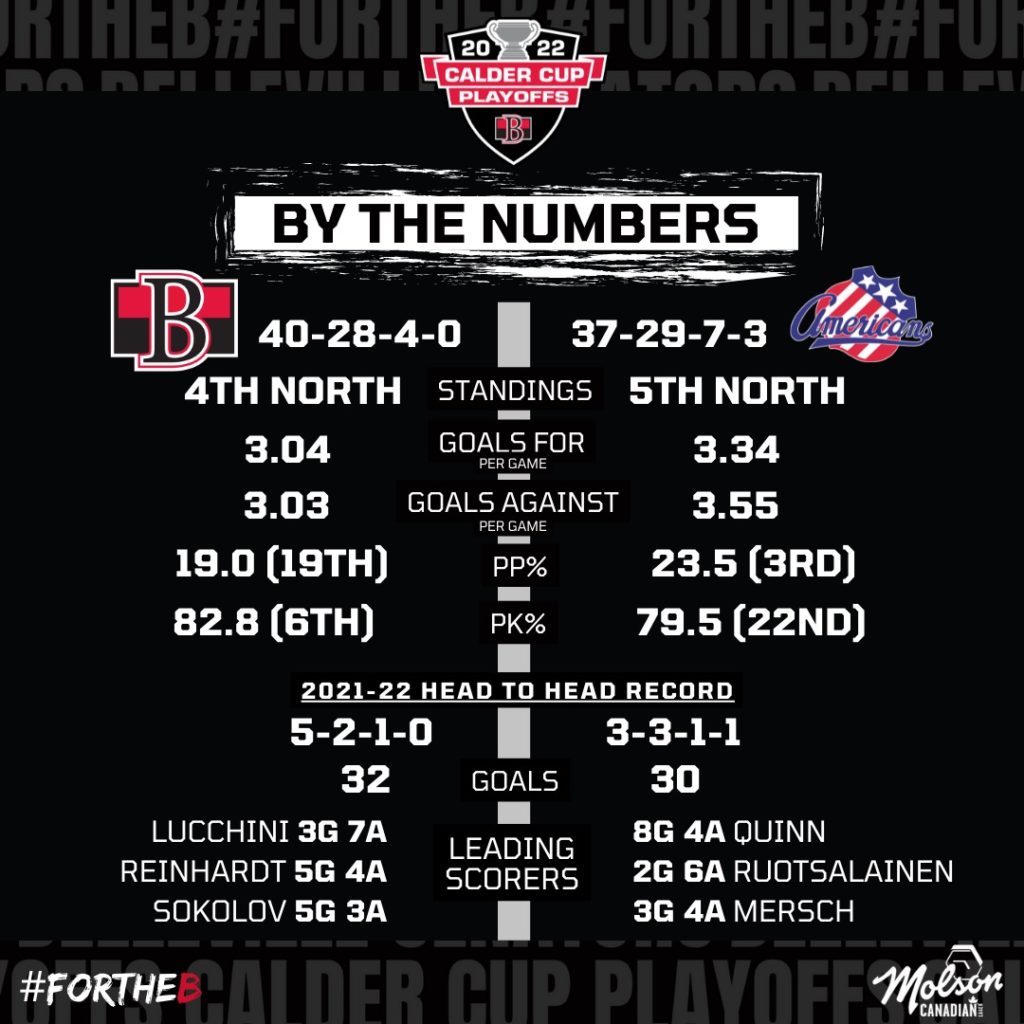 The Belleville Senators are hoping the old adage defence wins the championship will hold true through the Calder Cup Playoffs, starting with their North Divison First Round Series against the Rochester Americans on Wednesday night.

The AHL Sens who rank third-best in penalty kill percentage (82.8) and have allowed the fifth-least amount of goals against in the Eastern Conference (218), will have to stay true to their identity against a high-flying Rochester attack that has produced the most goals in the Eastern Conference this season at 254. That overall offence has been supplemented by a power play that operated at 23.5%, which also topped the Conference.

Belleville comes into the playoffs playing their best hockey of the season. After a difficult start paired with a roster in consent flux  (that saw the organization make a total of 207 transactions on the season), they earned a record of 25-11-4-0 over the final three months to secure a postseason berth for the first time in franchise history.

The Amerks enter the Calder Cup Playoffs for the 47th time, after clinching the fifth and final place in the North Division playoff picture on the final day of the regular season. Oddly enough, the Amerks only got into the postseason after receiving some help from Belleville, who eliminated the Toronto Marlies from playoff contention with a 5-2 win last Saturday.

Recently named team MVP, left-winger Jake Lucchini will be called upon to help lead the Belleville offensive. The native of Trail, BC, has been a constant in the lineup, skating in all 72 games after he was acquired from the Laval Rocket prior to the start of the season. Lucchini would set professional career highs in goals (20), assists (31) and points (51) on route to leading the team in overall scoring.

Belleville will also lean heavily on the presence and pedigree of past Calder Cup Champions defenceman Dillion Heatherington (2016) and centreman Clark Bishop (2019) throughout the postseason. In net, Filip Gustavsson will receive the call to begin the playoffs. The 23-year-old native of Skelleftea, Sweden, appeared in 20 games with Belleville, posting a goals-against-average of 2.50, with a save percentage of .915 and an 11-6-1-0 record. He also appeared in 18 games with the Ottawa Senators this season.
The Amerks will undoubtedly be led offensively by rookie forwards JJ Peterka and Jack Quinn. Peterka, a native of Munich, Germany, ranked tenth in AHL, scoring with 68 points (28 goals, 40 assists) in 70 games played. While Dudley (Red) Garrett Memorial Award winner Jack Quinn finished 20th after recording 61 points (26 goals, 35 assists) over 45 appearances. Rochester received a major boost on the back end as Mattias Samuelsson was returned from the Buffalo Sabres in time for the playoffs. The 22-year-old, who split his season between the NHL and AHL, notched 28 points in over 45 games played over the past two seasons.

As the fourth seed, Belleville will have a home-ice advantage, however, the best-of-three game series will open in Rochester on Wednesday, May 4. The series shifts back to CAA Arena in Belleville for Game 2 on Friday, May 6 and Game 3 on Sunday, May 8 (if necessary).

Tickets to Belleville Sens home playoff games can be purchased via Ticketmaster, or by visiting the CAA Arena Box Office. Box office hours and details on group packages, premium seating, and other ticketing options, are available at bellevillesens.com.