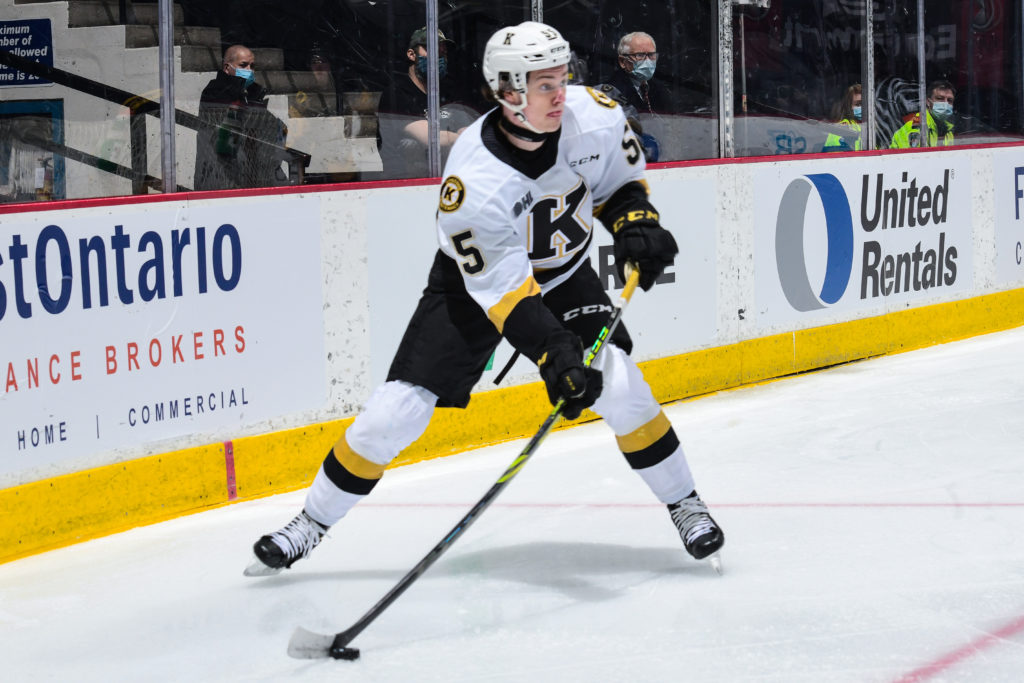 In the Fall of 2020, Ben Roger was left waiting for an Ontario Hockey League season that never came.  It could have been a low point, but the smooth-skating blueliner from Brighton, Ontario, used the time away from major junior hockey to accelerate his career. He is currently well on his way to his professional debut.

The pandemic left him in a precarious situation heading into his National Hockey League draft year. COVID-19 had already shortened his rookie season with the London Knights to just 35 games with the storied franchise, and worse still, the 2020-21 campaign became a complete write-off as the OHL cancelled its return to play in order to comply with provincial health guidelines.

Based on his relatively limited body of work, Roger realized he needed to improve in certain areas to become an effective defenceman at the next level. While back at home in the Bay of Quinte Region, he turned to those he knew could help most, specifically his trainer Jeremy Benoit (a strength and conditioning coach with the Ottawa Senators, who held the same position with the Belleville Sens before an NHL promotion) and power-skating instructor Chris Longo (an assistant coach with the Kingston Frontenacs).

“It’s nice to have those connections so close to home and to have familiarity with a lot of people,” Roger said, describing his relationship with his mentors. “It’s a good group. I’m happy where I’m developing. My relationship with Jeremy is great. He’s a friend, but most importantly, he’s my trainer. He never lets me take an easy stride or rep. He’s pushing me every day. It was nice to reunite with Chris and work together during the season. Skating with him in the offseason has been huge for me in terms of developing and lengthening my stride. It takes a lot of time and work, but I take a lot of pride in being a good skater and being able to move well at my size. I’ve improved and continue to work on that.”

Roger quickly started using the layoff to work on his conditioning, and no one can argue with the results. He added 35 pounds of muscle in less than a calendar year, weighing in at 165 pounds at the start of the process. The 6-foot-4 blueliner now tips the scales at a solid 200 pounds. Further, he began working more on his skating, improving his stride and edge work to maximize the output from his long powerful legs.

His effort paid off, and after an impressive performance at the PBHH Hockey Invitational, the Ottawa Senators had seen all they needed. They happily took him in the second round (49th overall) of the 2021 NHL Entry Draft. An incredible achievement considering his position going into 2020-21. In essence, he used the OHL shutdown to propel his career forward by focusing on strength and skating.

More recently, his OHL rights were dealt to the Kingston Frontenacs, where he has become a mainstay. He might even find himself closer to home when he makes the American Hockey League. Undoubtedly his friends and supporters will be front and centre. A professional debut in the CAA Arena would be more than appropriate, considering the hours of gruelling training he has logged in that venue.

It is hard to think of a recent prospect who has managed to raise his stock as quickly and thoroughly as Roger in such a short time. For his part, the humble 19-year is quick to credit his trainer and coach rather than point to himself.

Longo and Benoit are proud of Roger’s progress. They both know how hard he has worked behind the scenes to become a top prospect within the Senators’ organization.

“Throughout the pandemic, he was never down and out,” Longo said. “We talked on the phone often and got on the ice when we could. He stayed positive and was always skating, even if it was an hour out of his way. All he wanted to do was be ready for when hockey did return. There are never any excuses. He kept his eye on the prize and  kept moving forward with his preparation and work ethic.”

“It definitely takes a community to get to the next level, especially when there is no hockey,” Benoit said. “We’ve grown together. I think he takes my challenges to heart, and it’s been fun watching him develop and grow up. He’s surrounded by good, hard-working people and athletes. He just has to keep putting in the work and understand what his identity is going to be in the future. For us, we’re going to keep adding more depth into his off-ice routine.”

Whether Roger returns for an over-age season in the Limestone City or makes the jump to the professional ranks, one thing is certain. Those who have worked with Ben are not surprised that he persevered. His attitude and work ethic make him an ideal role model for his community.

“It shrinks the dream into something more tangible,” Longo said. “It puts everything into perspective that someone from a smaller community in the Bay of Quinte Region can reach their goals and be one step closer to the NHL with hard work.”