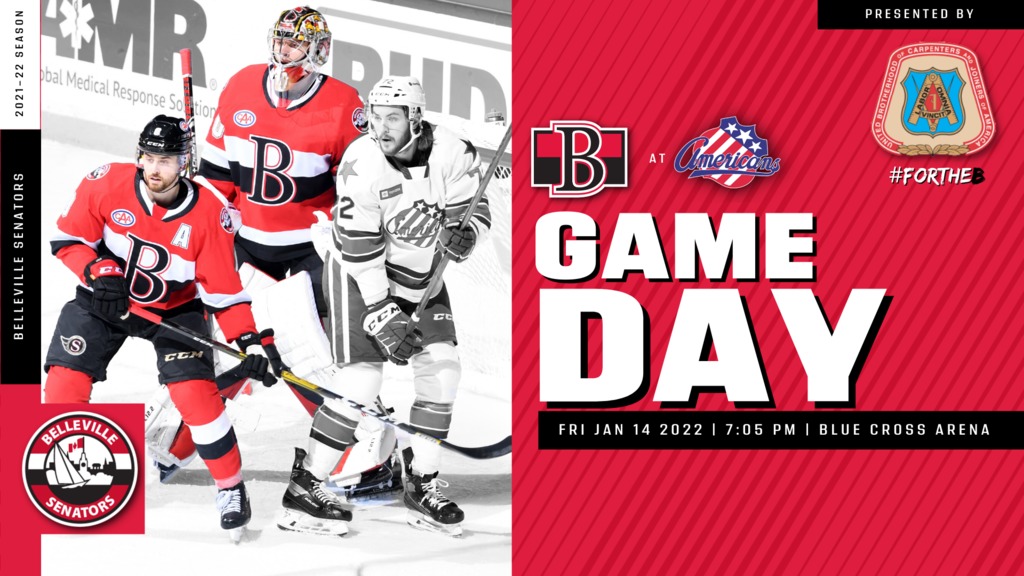 The Belleville Senators will try to turn the tides on their four-game road trip as they begin a back-to-back set in Rochester, against the Americans, tonight. The Senators are coming off a 4-2 loss in Toronto on Wednesday, when Lassi Thomson and Egor Sokolov found the net, but a pair of power play goals against ended up costing Belleville the victory. The Amerks, meanwhile, knocked off the American Hockey League’s second-best team in the Utica Comets on Wednesday night with a 7-6 win. Rochester is also struggling with some COVID-19 issues, with six players in the league protocol. A rash of injuries in Buffalo has also led to a handful of call-ups, including all three of the Amerks’ regular goaltenders.

Friday night’s meeting is the third of the season between the Belleville Sens and Amerks, with the teams splitting the seasons series so far. Belleville picked up a 7-3 win back on October 27, 2021 at CAA Arena, with Rochester winning the only game of the season at Blue Cross Arena, 4-3 on November 3, 2021. Lifetime, the Senators are 10-8-2-0 against the Amerks, with a 6-4-0-0 record in Rochester.

Head Coach Troy Mann will make just two changes to his lineup from Wednesday’s loss, inserting a now-healthy Colby Williams into the defensive pairings, in place of Cody Goloubef. Mads Sogaard will start in goal and be backed up by Filip Gustavsson, who is expected to start in the back end of the double-header on Saturday. Along with Goloubef, Belleville’s scratches tonight include Xavier Bernard, Jack Dougherty (injured), Tyrell Goulbourne (personal), Kevin Mandolese (injured) and Hugo Roy.

The Amerks lineup boasts one of the American Hockey League’s top scorers and some of the league’s best rookies as well. Veteran Rochester captain Michael Mersch is second in AHL scoring with 31 points (16 goals, 15 assists), while rookie forwards Jack Quinn, JJ Peterka, Peyton Krebs and Brandon Biro are all among the top 20 scoring rookies in the AHL. Amerks Centre Arttu Ruostsalainen is riding a three game point streak (two goals, three assists) and had a goal with seven shots on net in Wednesday’s win over Utica.

Tonight’s game starts at 7:05 p.m. ET and can be heard on the Belleville Sens official broadcast partner 800 AM CJBQ, with David Foot (Broadcast time is 6:50 p.m.). The game can also be streamed live on AHL TV.