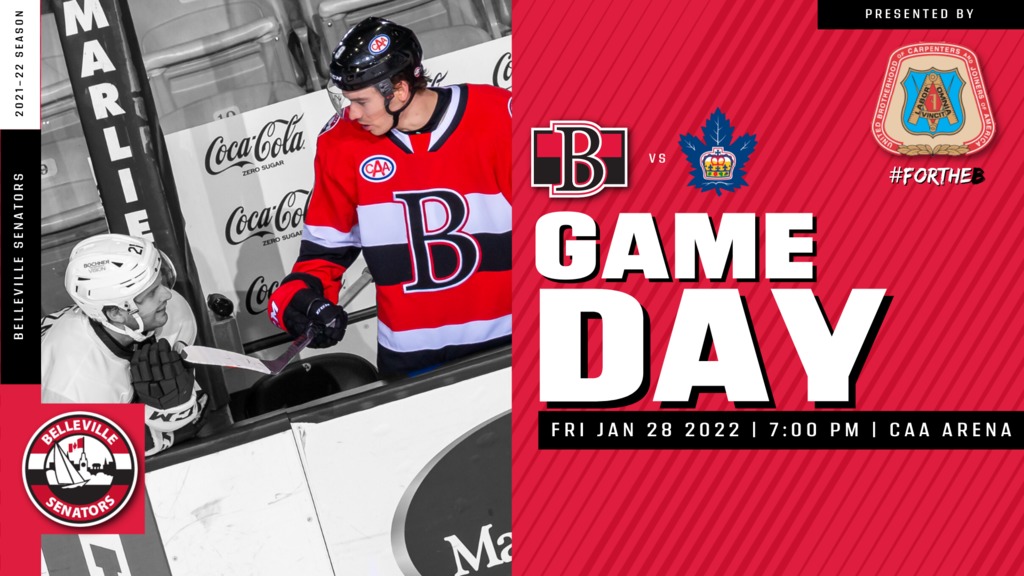 The Belleville Senators are in an odd stretch of the modified 2021-22 American Hockey League schedule, which sees them come off a 10-day break tonight to play one game, before a few more days off. The Senators haven’t played since January 17, 2022, at Syracuse, when they lost 2-1 to the Crunch with a last-second goal against. Following tonight’s game, the Senators will play 40 games in 89 days to finish off the season. The Marlies, meanwhile, are in the middle of a nine-game road trip that has seen them pick up wins in Hershey, Lehigh Valley and Grand Rapids, along with losses in Hartford and Wilkes-Barre Scranton. Their last game was this past Monday when they beat Grand Rapids 4-3 in overtime.

Head Coach Troy Mann will go with 11 forwards and seven defencemen for tonight’s contest, with a handful of regulars called up to either play for Ottawa or be a part of the NHL club’s taxi squad. A couple of the notable additions to Belleville’s roster include defenceman Jacob Bernard-Docker, who was returned to Belleville from Ottawa this week. Forward Mitch Hoelscher is also back, after notching 10 points (three goals, seven assists) in six games recently with the Senator’s ECHL affiliate in Atlanta, following a lengthy injury layoff. On the injury front for the Belleville Sens tonight, forward Angus Crookshank has been around the team but is still a way off from returning, goaltender Kevin Mandolese is out day-to-day with an injury, defender Jack Dougherty is out with an upper body injury, forward Tyrell Goulbourne is hoping to return to the team from personal leave shortly and defenceman Cody Goloubef is a healthy scratch.

Belleville’s leading scorer, Jake Lucchini, has registered points in back-to-back games and has an assist in five of his last six contests. Fellow forward Egor Sokolov had five goals in his last four games, up until being held off the scoresheet in Syracuse, but won’t be in the lineup tonight after being recalled to Ottawa earlier this week. Rourke Chartier continues to be a pleasant surprise for the Senators this season as well. After signing a PTO in the offseason, the Saskatoon native has had at least one point in eight of 11 games he’s played in, with a 20-game injury layoff mixed in as well.

For Toronto, Joseph Blandisi has assists in three straight games and forward Brett Seney has points in back-to-back games as well. Mac Hallowell has been Toronto’s’ best performer against Belleville this season, putting up two goals and six assists in six games played. Some good news for Sens fans is that Toronto’s second-leading scorer vs Belleville this season, Josh Ho-Sang, won’t be in the lineup after being named to the Canadian Olympic Team.

Tonight’s game starts at 7:00 p.m. ET and can be heard on the Belleville Sens Official Broadcast Partner 800 AM CJBQ, with Jack Miller and David Foot (Broadcast time is 6:50 p.m.). The game can also be streamed live on AHL TV.

Tonight’s game is being played without fans, due to the Ontario Government guidelines aimed at curbing the spread of COVID-19. More information on that decision can be found by clicking here.

Single game tickets for the remainder of the 2021-22 Belleville Senators season are now on sale and can be purchased via Ticketmaster, by stopping by the CAA Arena Box Office. Season Ticket Memberships and Flex Packs are also available with more information available at bellevillesens.com.