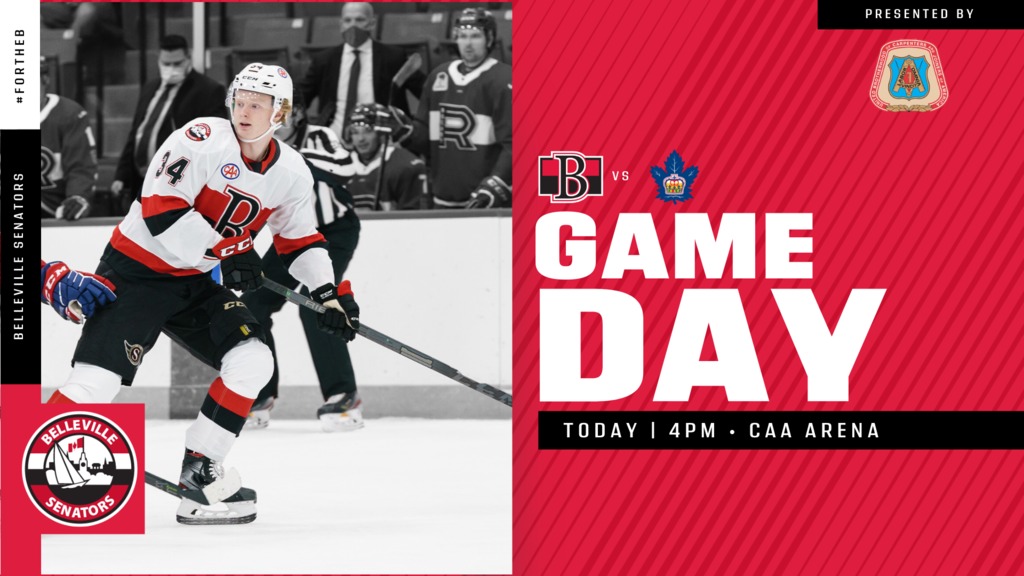 The Belleville Senators finish off their short preseason by hosting the rival Toronto Marlies at CAA Arena on Sunday afternoon. Belleville had a successful start to its exhibition schedule on Friday, knocking off the Laval Rocket 5-3, with five different goal scorers contributing to the win. Toronto is coming off a 2-1 win over Laval Saturday at CAA Arena.

Despite the Marlies success early in Belleville’s AHL history, the Senators lifetime record against Toronto is an impressive 22-16-2-2. Belleville took six-of-eight meetings from the Marlies during the shortened 2020-21 season and finished ahead of Toronto in the Canadian Division, with the Marlies posting a record of 16-17-0-2. However, the Marlies did win the last matchup between both teams 6-3, snapping Belleville’s franchise record eight-game winning streak.

With the NHL Senators sending back some players from Ottawa, the Belleville Sens are making at least six lineup changes from Friday night’s preseason opener. Pontus Aberg, Mark Kastelic, Parker Kelly, Kameron Kielly, Lassi Thomson and Mads Sogaard will all draw in. Egor Sokolov is among the Belleville Sens who won’t dress on Sunday, getting the afternoon off after posting three assists on Friday.

Goaltender Mads Sogaard is sure to draw some attention this season. The 6’7’’ 20-year-old won all seven starts he made for the Belleville Sens last season and over the summer, help Denmark’s national team to qualify for it’s first ever winter Olympics. He’ll play at least two periods today.

The line of Kastelic, Kelly and Cole Reinhardt is also being reunited after finding some on-ice success in Belleville’s pandemic bubble last season.

Toronto will ice a number of top prospects Sunday afternoon including Nick Robertson, Semyon Der-Arguchintsev and Pavel Gogolev. Newly-signed Josh Ho-Sang is also in the lineup, along with 6’9’’ forward Curtis Douglas, who played 11 games with Belleville last season.

Today’s game starts at 4:00 p.m. ET and is only available to be heard on the Belleville Sens official broadcast partner 800 AM CJBQ, with Jack Miller and David Foot. Regular season games will be available on AHL TV.

Single game tickets for the 2021-22 Belleville Senators season will be on sale to the public at noon ET on Tuesday October 12, 2021. Tickets can be purchased via Ticketmaster, or by making an appointment at the CAA Arena Box Office by emailing Cody Hall (hallc@bellevillesens.com). Season Ticket Memberships and Flex Packs are also available, with more information available at bellevillesens.com.