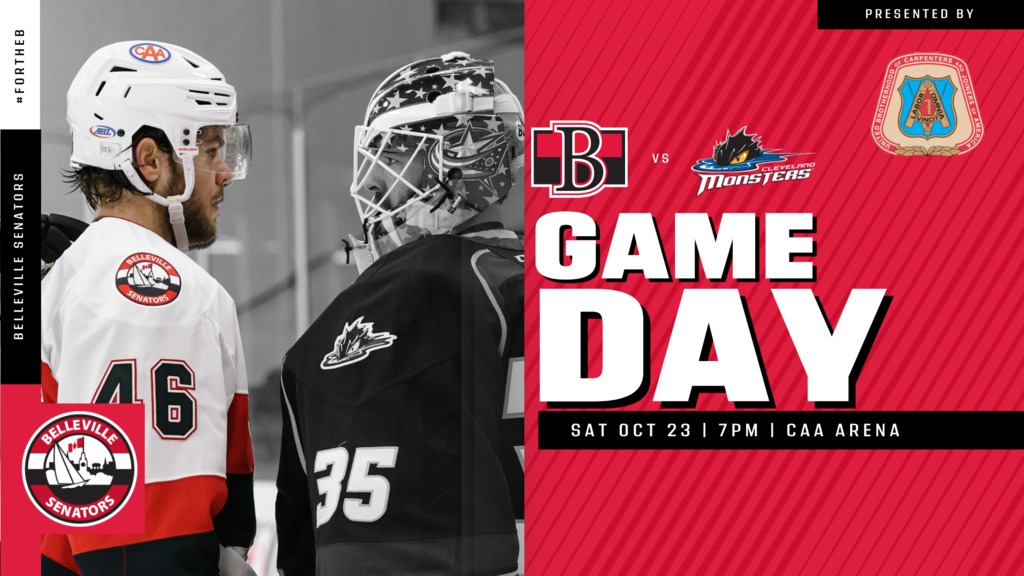 For the second week in a row the Belleville Senators suffered a Friday night loss but will get the chance for some quick revenge, as they host the same opponent a night later. Belleville welcomes the Cleveland Monsters to CAA Arena again, less than 24 hours after being shut out 4-0. It’s a similar situation to last weekend, when the Senators were beaten by Laval on Friday night on the road, before getting some redemption against the Rocket at home, on Saturday. Belleville will need to convert on its offensive chances and tighten up a bit defensively, against a Monsters club that showed its experience on Friday.

Belleville’s lifetime record against Cleveland fell to 6-6-0-1 after last night’s last night’s loss, with the Senators still holding a 4-2-0-1 advantage over the Monsters at CAA Arena. The two teams will meet again on November 5 and 6, at Rocket Mortgage Field House, to finish off the two game season series. Belleville has a 2-4-0-0 record in Cleveland.

There are a handful of lineup shuffles being made by Head Coach Troy Mann after Friday’s defeat, including going with 11 forwards and seven defencemen. Kevin Mandolese will make his first start of the season in net, while Zac Leslie will make his season debut and Maxence Guenette will play his first career AHL game on the blue line. Colby Williams, Tyrell Goulbourne and Cedric Pare are among the players scratched tonight, who played on Friday.

Young forward Philippe Daoust had a strong game on Friday, despite not scoring. The former Barrie Colts prospect created a number of chances and battled his way to the net on multiple occasions, but couldn’t score. For the Monsters, defenceman Gavin Beyreuther has three assists in his last two games, while rookie forward Tyler Angle is riding a three game point streak.

Tonight’s game starts at 7:00 p.m. ET and can be heard on the Belleville Sens official broadcast partner 800 AM CJBQ, with Jack Miller and David Foot. The game can also be streamed free via AHL TV.