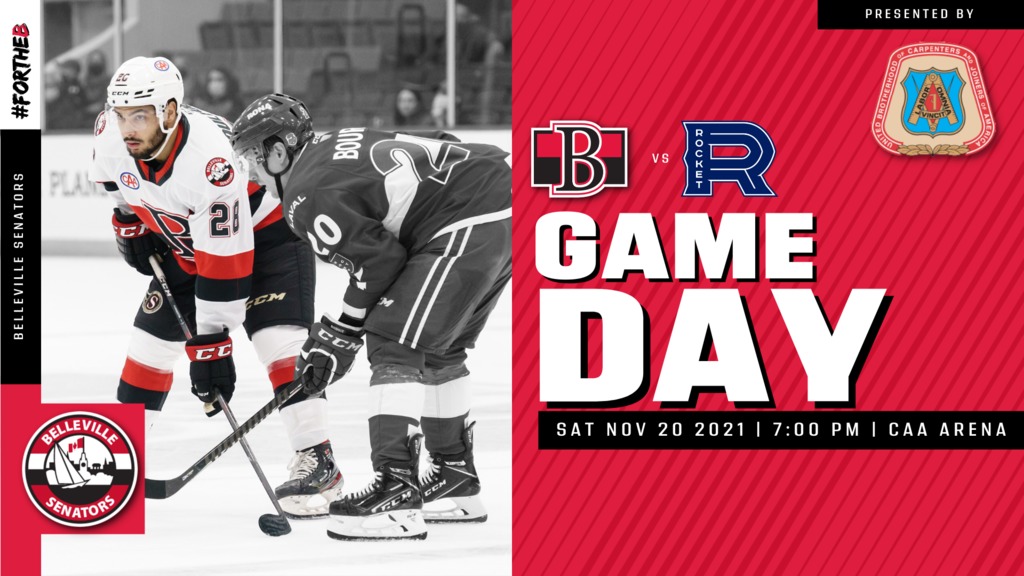 Things seem to be returning to normal for the Belleville Senators, following a wild week that saw them play three games in five days and work a half-dozen new faces into the lineup, due to COVID-19-related health concerns with the parent club in Ottawa. But those issues are clearing up, the Sens have had a full week of practice and some key players are returning, just in time to face the Laval Rocket at CAA Arena tonight. Last week Belleville lost to the Rocket on the road (3-0), before beating Bridgeport (3-2) and losing to Utica (4-1) at home. Along with the win over Belleville, the Rocket’s last week of games included an overtime win over Bridgeport (5-4) and a loss to Utica (5-3) at home, along with a comeback shootout victory (6-5) in Toronto. The Rocket will play their next three games against Belleville (including tonight), while the Senators will make a stop in Syracuse next Wednesday, before a home-and-home with Laval next weekend.

The Belleville Sens and Rocket are already getting quite familiar with each other this season, as tonight’s game marks the fourth meeting of the campaign between the two teams. Laval has won two of those meetings (6-2 and 3-0), both at Place Bell, while the Sens picked up a victory (5-2) in their only meeting at CAA Arena, during the home opener. Belleville’s lifetime record against Laval is 22-22-1-2, with a 13-8-0-2 mark at home.

Some reinforcements are returning from Ottawa, as defencemen Jacob Bernard-Docker, Dillon Heatherington and Maxence Guenette, plus forwards Egor Sokolov, Scott Sabourin and Andrew Agozzino were all returned from the NHL club earlier in the week. All six players have cleared the NHL’s COVID-19 protocol, after Ottawa had a trio of games postponed this week, and all six are expected to dress tonight for Belleville. Mads Sogaard is slated to start in net

The six returnees noted above will be worth watching tonight, as none of them have been able to skate since last weekend, due to self-isolation rules and it will be interesting to see how they’re able to adjust. Otherwise, Sens forward Pontus Aberg has points in back-to-back games (one goal, one assist) and will try to extend that point streak to three tonight, while Tyrell Goulbourne is playing his 300th American Hockey League game tonight.

For Laval, Xavier Ouellet has points in three straight games (one goal, two assists) and has seven points over the last 10 games (two goals, five assists). Montreal’s top prospect Cole Caufield also put up five points (two goals, three assists) during a six game stint with the Rocket, but he was recalled back to the NHL earlier this week.

Tonight’s game starts at 7:00 p.m. ET and can be heard on the Belleville Sens official broadcast partner 800 AM CJBQ, with Jack Miller and David Foot (Broadcast time is 6:50 p.m.). The game can also be streamed live on AHL TV.

Don’t forget to download the Belleville Senators app before game time and follow the Sens social media for updates.

Single game tickets for the 2021-22 Belleville Senators season are now on sale and can be purchased via Ticketmaster, by stopping by the CAA Arena Box Office. Season Ticket Memberships and Flex Packs are also available with more information available at bellevillesens.com.