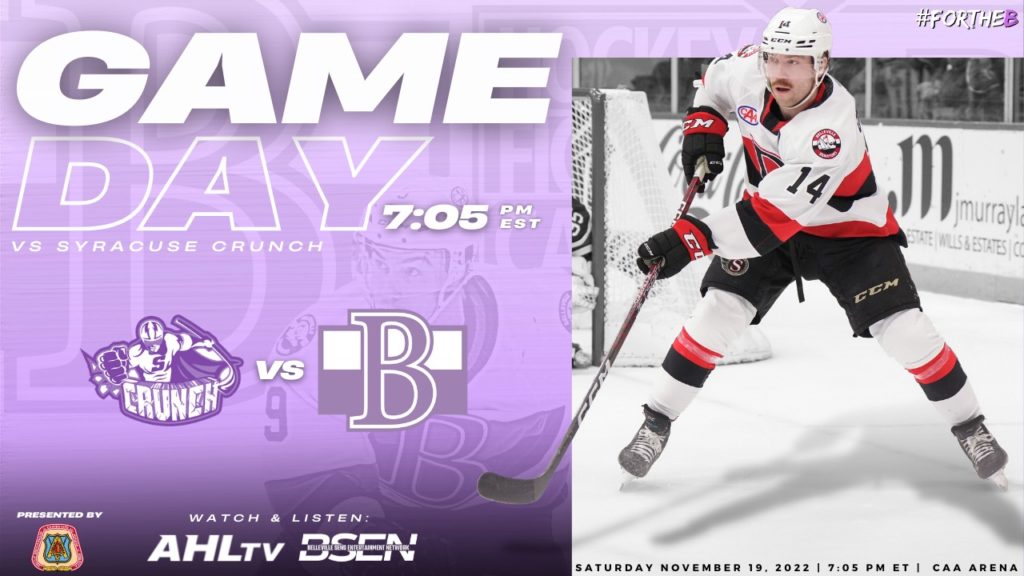 Less than 24 hours after an emphatic 6-1 victory over the Marlies in the AHL’s Battle of Ontario, the Belleville Senators will look to wrap up a strong week of divisional play tonight and take a shot back at the Syracuse Crunch. Egor Sokolov and Cole Cassels each scored twice last night, with Rourke Chartier and Ridly Greig also chipping in and Antoine Bibeau stopped 32 shots, helping the Sens to their first three-game win streak of the season. The Crunch are in similar form, winners of three straight and outscoring their opponents (including Belleville) 17-9 over that span. Syracuse will be slightly more rested, after arriving and practicing in Belleville on Friday afternoon, following a 5-4 shootout win in Springfield this past Wednesday.

This is the second time in eight days that the Sens and Crunch have met. The Sens couldn’t get past a stingy Syracuse defence corps on November 11, dropping a 4-2 decision and giving Syracuse the early edge in the six-game season series. The Senators tend to find more success against the Crunch at CAA Arena, rather than on the road, Belleville’s home record against Syracuse is 8-5-0-0. Lifetime against the Crunch, Belleville is 10-14-2-1.

There will likely be a bit of added focus on the Belleville blue line tonight, as Nikita Zaitsev joins the team, after clearing waivers from the Ottawa Senators last week. The 31-year-old brings a solid resume into the Friendly City, which includes 405 NHL games split between Toronto and Ottawa, along with a IIHF World Junior Championship title in 2010/11, a pair of IIHF World Championship bronze medals and multiple KHL all-star selections. With Zaitsev drawing in, Xavier Bernard will be a healthy scratch. Jarid Lukosevicus will rejoin the lineup in place of Matt Wedman, who blocked a shot with his foot last night and left the game. Logan Flodell will make his first start of the season, after coming into Wednesday’s game in relief of Antoine Bibeau, who will back up tonight.

Newly-acquired forward Brennan Saulnier has made an immediate impact for Belleville, notching three assists in his first two games. The Halifax, Nova Scotia native has fit in nicely on the Sens “identity line”, alongside Scott Sabourin and Cole Cassels and Scott Sabourin, after being traded from the Laval Rocket earlier this week.

A familiar name to some local hockey fans, Crunch defender Declan Carlile has had a strong start to his first full pro season. The former Wellington Dukes standout has three points in his last three games, including a goal and an assist in Syracuse’s win over Springfield earlier this week.

Tonight’s game can be seen on AHL TV, or heard live on the Belleville Sens Entertainment Network. Pregame coverage starts at 6:45 p.m. (ET) with David Foot and Brock Ormond.