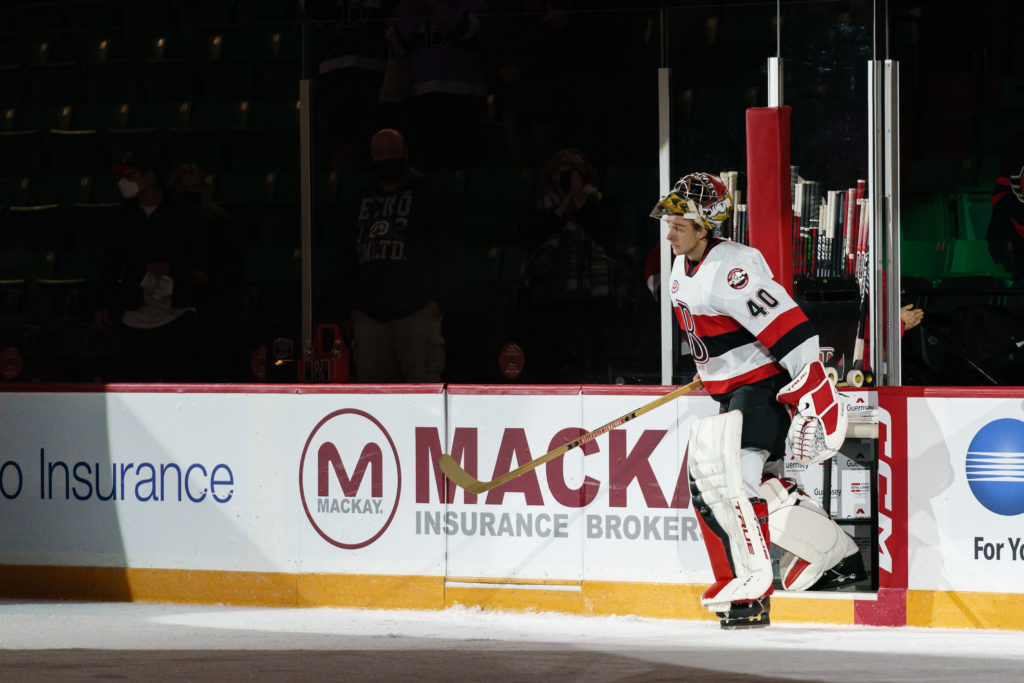 A stellar rookie American Hockey League season in 2021-22 only helped Mads Sogaard establish himself further as a top goaltending prospect within the Senators’ organization.

More importantly, the 21-year-old from Aalborg, Denmark, never faltered, even under the responsibilities that come with being a starting goalie on a professional hockey team. The 6-foot-7, 201-pound netminder went 19-14-1 in a season that included a great deal of roster turnover. Sogaard also backstopped the team to its first playoff appearance and posted amongst the best rookie numbers (GAA 2.86, SV% 0.908) in franchise history.

“I was fortunate to have lots of support in front of me all year,” Sogaard said. “We had a bunch of different looks on the roster but were always working hard. It was a privilege and pleasure to play with all those guys.”

Not every aspect of his season went according to plan. At times, Sogaard battled homesickness when COVID-19 travel restrictions made it difficult for him to return home. But during those more challenging times, he relied on his teammates and management, especially goaltending coach Justin Peters.

“Not seeing my family for that long was really tough, and he was there with me all the way, supporting me through some tough times. He means a lot to me as a coach, but he means even more on a personal note because it’s not always a smooth road. There’s a lot of stuff going on behind the scenes that people don’t know of, and he was there all the way.”

In spite of his accomplishments, Sogaard is quick to give credit to Peters, who not only assisted him with his vast technical knowledge but also supported him through those challenges. In particular, he noted that he helped him to adjust to the pro game.

“It’s a whole new game. Honestly, before, there was no certain game plan for me,” Sogaard said. “I was going through the motions out there. He has established a good program. It’s awesome to work with him. He’s one of the best goalie coaches I’ve ever had and one of the greatest guys. He really takes care of me.”

Peters was equally impressed by the efforts the young netminder made throughout the season to improve his overall game, especially in the face of adversity.

“Everybody has their own stuff going on in their life,” Peters said. “I’m just being supportive and there for him on a day-to-day basis, understanding I went through the same things he is and reminding him that all of this is normal and happens in the ups and downs of a season at the end of the day, we’re learning from them. At the same time, I’m learning how to get to know him better and help so that he can tap into his talent.”

“We all think we know what it will be like, but we don’t realize the demands of the season. He understands how long and how demanding an AHL season is now. I think he has learned. His onus now is to take the information we’ve gathered and put a plan in place along with myself Mitch Freeburn, Jeremy Benoit, and the rest of the coaching staff so that he can succeed. At the end of last year, he spent a lot of time  in the gym, and he was able to put together a game plan in the weight room, a warm-up and cool-down that he can implement on a day-to-day basis that will allow him to step on the ice and know he’ll be able to perform.”

While it was a season not without challenges, it is impossible to argue with the results. Sogaard caught the attention of Senators executives with his excellent play and was rewarded. He appeared in two games with the Ottawa Senators, earning a win in his NHL debut on April 1, 2022, versus the Detroit Red Wings.

“Getting that experience and seeing what it is like leaves you hungrier than ever.” I’m working to put myself in the best situation to make the NHL. That’s my goal, or at least push for more games. I’m really excited to keep working and trying my best to get there because it’s such a cool place to be and thing to do.”