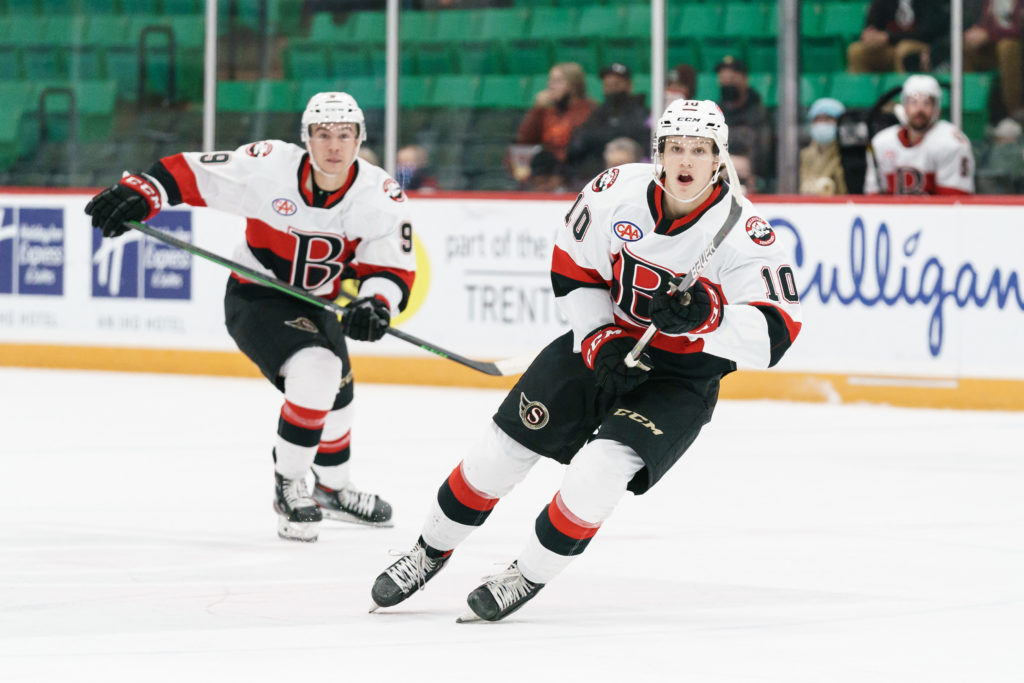 Although eligible to remain in the QMJHL as an over-ager, Daoust started the 2021-22 season in the Friendly City. He joined the AHL Senators for 15 games and managed five points (all assists) in his first professional hockey stint. After more veterans were returned to the roster, the 20-year-old native of Barrie, Ontario, was loaned to the Sea Dogs after he was acquired from the Moncton Wildcats. The skilled centreman thrived in his new setting, tallying 47 points (24G, 23A) in 38 appearances.

“With all the high-end talent in Belleville this year, the organization thought it was best for me to return to the QMJHL. It’s always been my dream to win a Memorial Cup, and they wanted to give me that opportunity,” Daoust said. “I gained a lot of confidence from my time in Belleville. They taught me a lot in a short period of time, and I couldn’t be more grateful for that.”

Daoust believes his pro experience has helped prepare him for the mental and physical pressures of playing in such a prestigious tournament.

“There’s going to be pressure for myself and the entire team. I’m staying level-headed and focusing on the job that has to be done. Playing my game and showing everyone the type of player I am and trying to win a cup. “

Despite their first-round loss in the playoffs to the Rimouski Océanic and a long layoff, Daoust was adamant that the hosts will be ready to contend for the title once the 102nd Memorial Cup championship gets underway on June 20 at the TD Station.

“It’s definitely been a grind. We’ve had a training camp mentality and atmosphere, a lot of tough practices. I’ve been finding ways to get better every day, so I’m prepared for the biggest tournament of my life.”

While Daoust’s focus rightfully remains on the task at hand, he took a moment to reflect on his bright future with the Senators organization.

“I have to thank the entire organization for taking a leap of faith in me. I’m working every day so that I can play in the NHL for the Ottawa Senators, but for right now, my focus is on my development and doing everything I can to get better every day. They trust in me to do that, and I want to prove to them that I can do that.”