Preseason contest a homecoming for Batherson 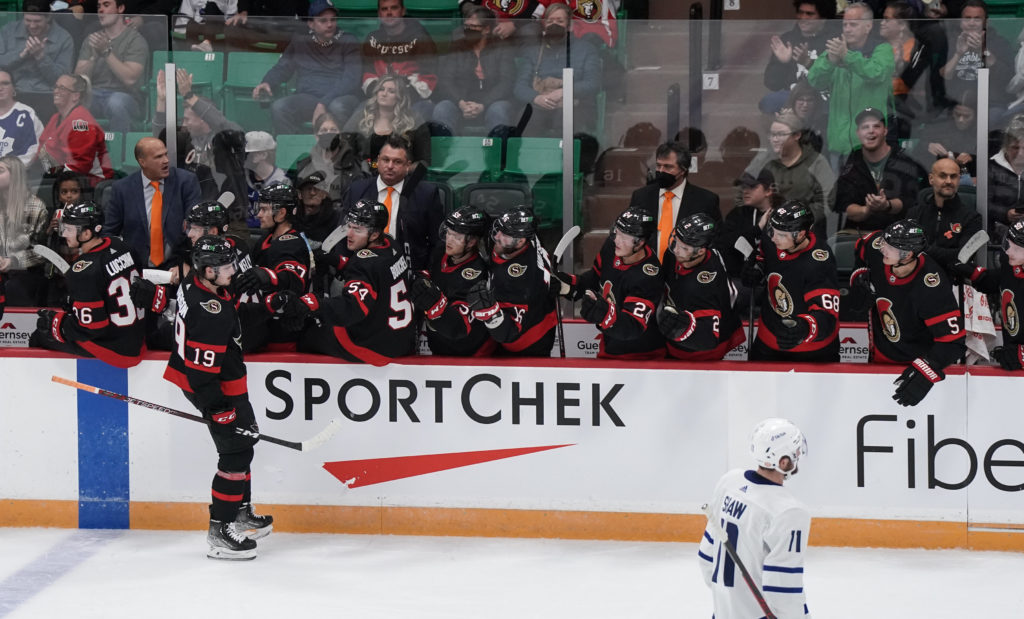 For Senators forward and Belleville Sens grad Drake Batherson, it was also an important homecoming.

“I have a lot of family ties here, Batherson said during his postgame media availability. “My Mom grew up here. My Dad played junior here, so it’s awesome to come home. Obviously, spending two years here, I met a lot of people. I was excited, as well as everyone else, to come down here.”

In spite of the 6-3 loss, Batherson was glad to be back in Belleville, where he spent his entire American Hockey League career, setting all-time franchise records for goals (38), assists (78), and points (116) in 103 appearances with the club. Batherson is now an established offensive threat in the NHL with 97 points, including 40 goals, in 145 career games.

“It’s a little disappointing, Batherson said. “It’s a full barn out there, and you want to come down and win for them. I come from a small town, and I know how much it means for these kids to come out and see an NHL game. We wanted to come down and get a win. That wasn’t the case.”

Batherson performed well in front of the hometown crowd. The skilled forward found the back of the net with the man advantage in the second period. Although the Maple Leafs seemed to carry the play from the onset, his tally proved to be one of the few bright spots.

"We are looking forward to the rest of the pre-season games to create that chemistry and get it going for the real thing once the season starts"#Sens winger Drake Batherson on building chemistry during the preseason. pic.twitter.com/vh4RSCmJl7

As Batherson, a native of New Minas, Nova Scotia, continues to work towards furthering his career, he credits Belleville Senators Head Coach Troy Mann and his staff for providing a positive starting point in his professional hockey career.

“We still text here and there,” Batherson said of his relationship with Mann. Every time we come into training camp, we always chat and reminisce about the old times.  He was my first coach in pro hockey. I owe a lot to him and the staff here for where I am today.”

While Batherson prepares for what could be a breakout season in Ottawa, a preseason stop makes a fitting beginning and a reminder of his past successes and continuing friendships. He also passed along some words of advice for the next wave of Sens prospects coming through Belleville.

“Just enjoy it. When I was here, we just had fun every day, came to the rink, and tried to work as hard as we could. I had an absolute blast down here. For the guys coming up, keep working hard and having fun. That’s what Josh Norris and I did, and we obviously made that jump.”