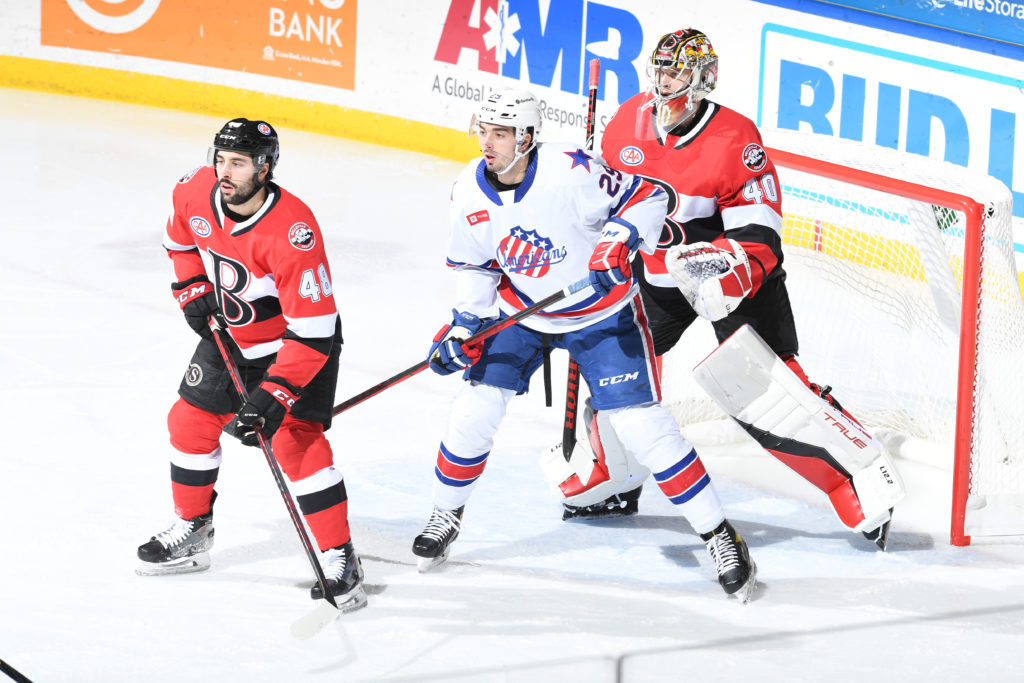 The Belleville Senators stayed perfect in the shootout with a 4-3 victory over the Rochester Americans on Friday night at Blue Cross Arena.

Jake Lucchini and Rourke Chartier tallied for the Senators in the shootout while Mads Sogaard stood tall, making three saves on four attempts to secure the win.

The Senators opened the scoring shorthanded as Cole Reinhardt broke out of his nine-game scoreless drought tapping in a cross-ice feed from Maxence Guenette at 6:10 of the first stanza.

Rochester, however, answered in short order to tie the game at 7:36 through a Patrick Polino backhander. The Amerks took a 2-1 lead just under a minute later when Michael Mersch scored his league-leading 17th goal of the season.

In the second, Mark Kastelic capitalized on a loose puck in the crease to draw the Senators even. Belleville would outshoot Rochester 13-4 in the frame. Belleville continued to dominate the play, holding the AHL’s highest-scoring team to without a shot on goal for over 27 minutes of game time.

Egor Sokolov continued his goal-scoring streak giving the visitors a 3-2 lead 6:25 into the third period. But a seeing-eye shot from Linus Weissbach knotted the game at three apiece with 1:41 remaining to force overtime. Despite the late equalizer, Belleville ultimately came through in extra time.

“I thought that line of Kelly-Kastelic-Reinhardt drove the engine tonight. I thought they were excellent all game long.”
“Sogaard such a presence in the net, such a calming influence back there. I thought he was very good. Now obviously didn’t see much action there for a long stretch of play, but certainly makes saves when you need them, and glad we got the win for him.”

The Belleville Senators are back in action Saturday when they visit the Rochester Americans. You can hear the game on the Senators’ Official Broadcast Partner 800 AM CJBQ or see it on AHL TV. Coverage begins at 4:50 p.m with David Foot.