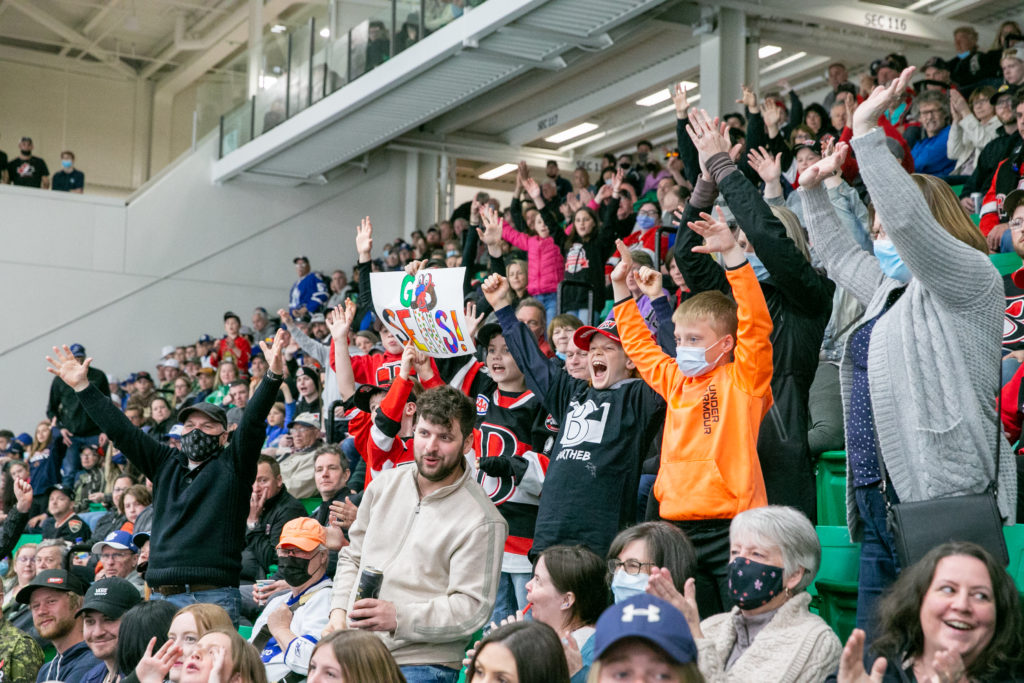 It may still be a few months away, but when the puck drops on the 2022-23 American Hockey League season, there’s little doubt that the Belleville Senators will once again be backed by their loyal and robust season-ticket base. Since their inauguration in 2017-18, the team has ranked in the league’s top half in both season ticket members and renewals. Although COVID and related health regulations presented some challenges for fans over the past couple of seasons, season ticket members remained enthusiastic about their experience with the Senators in 2021-22. The season produced many great moments for fans, players, management, and staff. Notably, Ottawa sent a number of top prospects to the Friendly City, and the Senators qualified for the postseason for the first time in team history.

Jim and Sandra Dempsey are among season ticket members that perfectly demonstrate this loyalty. The couple is so dedicated that they drive in from Prince Edward County to attend games. Their trips have given them a greater sense of community and belonging to the region. As ticket holders since day one after moving from the Newmarket area, games became an opportunity to connect to the City of Belleville.

“It has absolutely given us a sense of belonging, Jim said. “It’s amazing the number of people we’ve gotten to know in the area just through going to hockey games. It’s the best entertainment in town for the money.”

Gregor and Sonja Jackson and their sons Angus and Sammy have been committed season ticket holders for the past four seasons, since moving back to the Bay of Quinte Region from the United Kingdom. Their family enjoys the community aspect that is built at Senators games and the entertainment value that the hockey club offers.

“The pace and skill of the hockey and atmosphere are excellent. It’s a great family environment. The kids enjoy it, and we enjoy it,” Gregor said. Sonja added she is thoroughly impressed with the elite level of players they’ve been able to watch firsthand. “The fact that we have seen Drake Batherson, Alex Forementon, Josh Norris and Parker Kelly, who are all playing in the NHL now. It’s nice to see them all doing really well after following them for some time in Belleville.”

The Jackson family has also been suitably impressed with the team’s account executives, Ben Cochrane, Alex Siragusa and Cody Hall, who have helped make their ticket renewing process seamless.

“We have never had any issues with any of our account managers throughout the years, Gregor said. “The doors are always open, and nothing seems difficult if we have any questions, Ben always deals with them or points us in the right direction. We’ve never felt that we’re too much of a chore to him, and he never makes us feel that way either, adamantly approachable.”

Gregor also spoke highly of his experiences and is incredibly grateful for the opportunities having a local AHL team has presented his family and the local community.

“We have professional hockey on our doorstep, and you don’t want to lose that opportunity if you don’t get out and support local hockey. So, my message has always been to anyone that asks, get out there and support the team.”