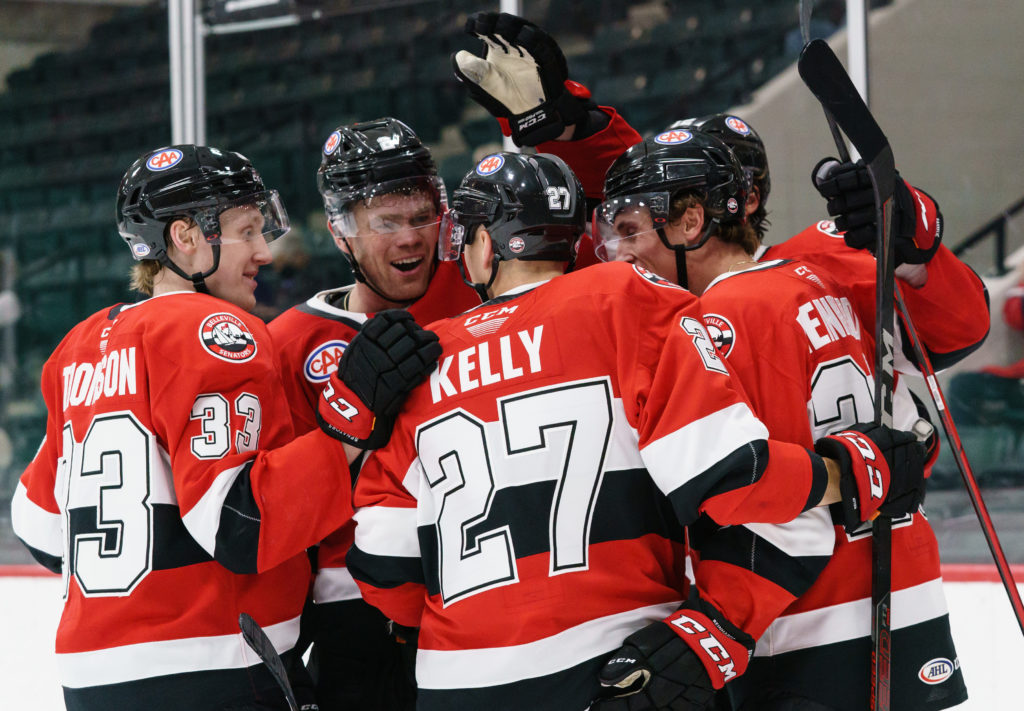 The Belleville Senators put an exclamation point on their short 2021-22 preseason with a 5-3 win over the Toronto Marlies on Sunday afternoon at CAA Arena.

Belleville had to come-from-behind three times in the game and face seven penalty kills, but eventually scored the game-winner with less than five minutes left in the third period.

Parker Kelly paced Belleville’s attack with two goals including the game winner, after being sent back from NHL Ottawa. Roby Jarventie and Rourke Chartier also scored, with Matthew Wedman adding an empty-netter to round out the Belleville offence.

Senators Coach Troy Mann called it a successful preseason for his club.

“I thought it was a good game for us overall and some guys really stood out. The pace was good and the belief to come back is really important and rewarding,” Mann told media post game, adding that Parker Kelly’s return made a huge impact.

“Parker Kelly was excellent and you could see that line had some chemistry from last year, after they played a lot last year. That’s why we put them together when Kelly came down,” said Mann. “I thought Wedman competed hard and his line with Chartier and Sherwood certainly had some moments as well.”

Mann also laid plenty of praise on Sogaard, who made some crucial saves to keep Belleville in the game.

“I thought he was excellent,” said Mann. “He had three goals against but a couple were mad scrambles with some traffic in front. As he did last year he made some huge saves and I thought it was a very good game for him.”

With five days to go until the regular season opener there are still some roster decision to be made, but Mann says they’re getting closer to where they want to be come Friday in Laval.

“We’re pretty close. We’ve got some guys coming back from injury and Andrew Agozzino is on waivers so that gives us a bonafide number one centre if he clears tomorrow. Dillon Heatherington is already down and that gives us a big shot defenceman.” The Coach added that his team is starting to recover from a rash of injuries through training camp as well.

“The good news is we’re getting very healthy. Come Tuesday, aside from Angus Crookshank who is out long-term and Zac Leslie who will miss the first weekend, we should be relatively healthy and that’s encouraging.”

Mann says they’ll keep some players around on professional tryouts through the week as well, to make sure there are enough bodies in case of injury.

The Belleville Sens will now take the week to prepare for a trip to Laval to open the season on Friday night, with the 2021 Home Opener presented by CAA South Central Ontario, back at CAA Arena on Saturday.

You can click here to see the box score from Sunday afternoon’s game.