Senators shut out by Monsters 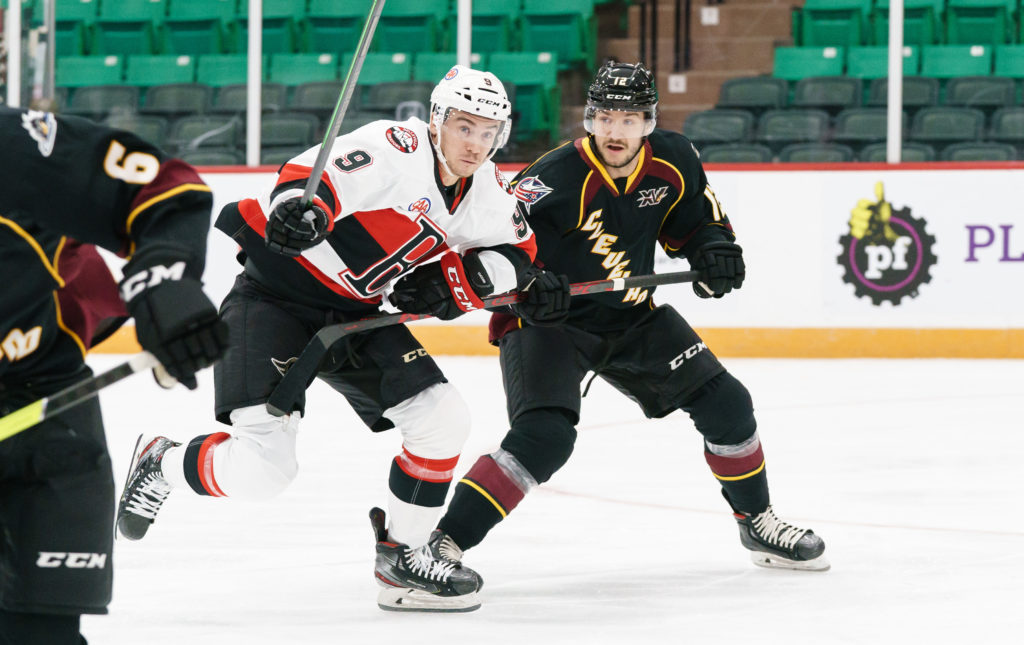 The Belleville Senators were left looking for offence Friday night, falling 4-0 to the Cleveland Monsters. The BSens were able to generate scoring chances throughout the night; however, they could not beat Jean-Francois Berube, who made 31 saves, earning his 12 career shutout. Brendan Gaunce (with the game-winner), Billy Sweezey, Brett Gallant, and Tyler Sikura scored for the visiting Monsters. While Filip Gustavsson turned away 28 shots for the home side, Cedric Pare made his AHL debut, centring the team’s second line.

Belleville’s best chance to get on the scoreboard came late in the second frame when Philippe Daoust split the defence moments after an Egor Sokolov wrister hit the post. Mark Kastelic also came close when he was turned away by Berube, on a breakaway.

Senators Coach Troy Mann says that could have been a turning point in the game.

“The Kastelic breakaway, or Roby Jarventie hitting the post could have changed the dynamics of the game and the backbreaker was their third goal. It was tough to come back from 3-0. Our power play also struggled tonight.”

Mann says some of the young stars are still trying to find a way to get going.

“We’re only three games in, but I’ve been saying this is the American Hockey League that we’re more accustomed to. There’s going to be some growing pains, but our top-end skill guys haven’t had an impact on any of our three games so far.”
Belleville and Cleveland are back in action tomorrow night for a 7:00 pm puck drop as the North Division rivals conclude a two-game set at CAA Arena.

Mann says that’s a good opportunity for his team to try and turn things around.

“We certainly have to play more of a support role through the neutral zone. I thought we reverted a bit to what we did in Laval in transition and didn’t make good decisions. We need to find ways for guys to find the back of the net, so we can find some momentum through goals.”

Single-game tickets can be purchased via Ticketmaster by stopping by the CAA Arena Box Office. Season Ticket Memberships and Flex Packs are also available, with more information available at bellevillesens.com.