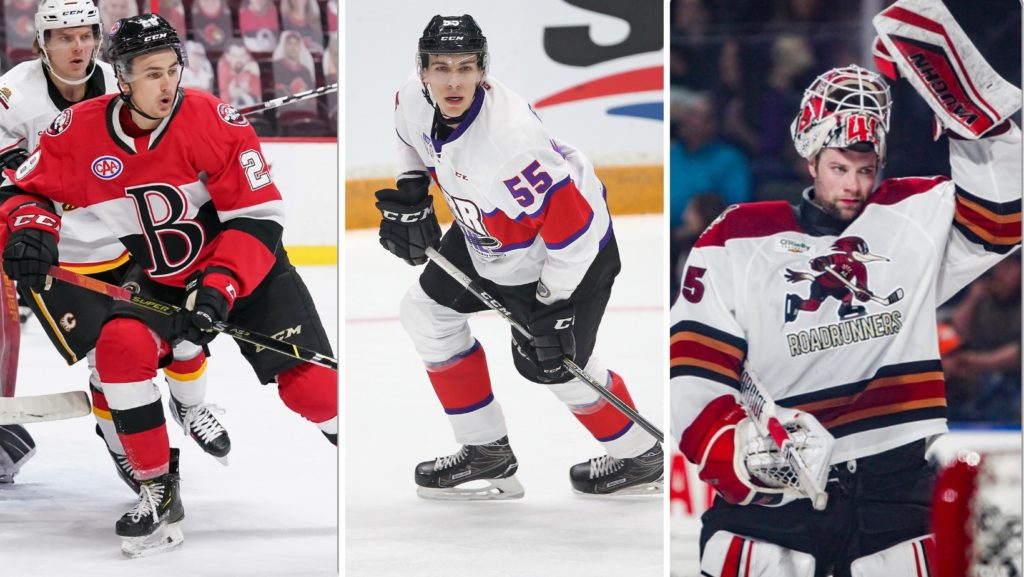 Hoelscher returns to Belleville after making his AHL debut last season on an amateur tryout agreement, notching one assist in seven games played, while being rotated through with several other young first-year pros. The 21-year-old from Elora, ON and former Ottawa 67 will look to make a bigger impression and build off what he’s learned in his career so far. Senators Head Coach Troy Mann says the attitude of the former sixth round pick (172nd overall) by New Jersey in 2018 really stood out to the coaching staff last season.

“Getting a look at him last year helped to make the decision to bring him back. He’s got really good hockey IQ and skill set. We loved his work ethic and attention to detail in practice and we felt with his versatility (he can play centre or wing) he’ll add some depth through the organization.”

Bernard is a 21-year-old from Mercier, QC, who was originally drafted in the fourth round (110th overall) by New Jersey in 2018 and spent the last four seasons in the Quebec Major Junior Hockey League, with stints in Drummondville, Charlottetown, Sherbrooke, and Val-d’Or. His career QMJHL totals include 103 points (23 goals and 80 assists) in 275 career games. He also represented Canada at the World Under 17 Hockey Championship back in 2016/17.

“He comes highly recommended from amateur scouting department,” said Mann. “They’ve had a long look at him. He was Max Guenette’s partner so when they’re watching him, they’re getting a feel for Bernard as well. It gives us a left shot option and he brings some size as well, if we need it down the line.”

29-year-old Parks is coming back to North America after appearing in 24 games with HC Slovan Bratislava in Slovakia in 2020/21, where he had a 1.41 goals against average and .940 save percentage, along with five shutouts. The St. Louis, MO native appeared in nine games for the Tucson Roadrunners (Arizona Coyotes) in 2019/20, posting a 2-1-1 record with a 2.18 goals against average and .920 save percentage. The former St. Lawrence University grad has played for more than a dozen teams over his career and Mann says Parks will give the Belleville Sens another solid option in the crease if goaltending depth becomes an issue.

“In my first two years we used six goalies, last year we used seven goalies in 35 games, so when Joey Daccord got picked up by Seattle in the expansion draft it was important to get a guy who can play AHL games. He comes with a real good resume and wants to prove he can play in the AHL, so we thought that was a great fit. We want to compete for a playoff spot, and we think he can help us down the line if needed.”
Hoelscher and Bernard will take part in Ottawa’s rookie camp, with all three players attending Belleville’s training camp before either being assigned to the AHL, or the Senators’ ECHL affiliate in Atlanta.

Belleville opens its fifth AHL season on October 15, 2021 in Laval, against the Rocket.

You can get your first in-person look at the Sens on October 16, 2021, when they return to CAA Arena for the first time since 2020 to host Laval in the home opener.